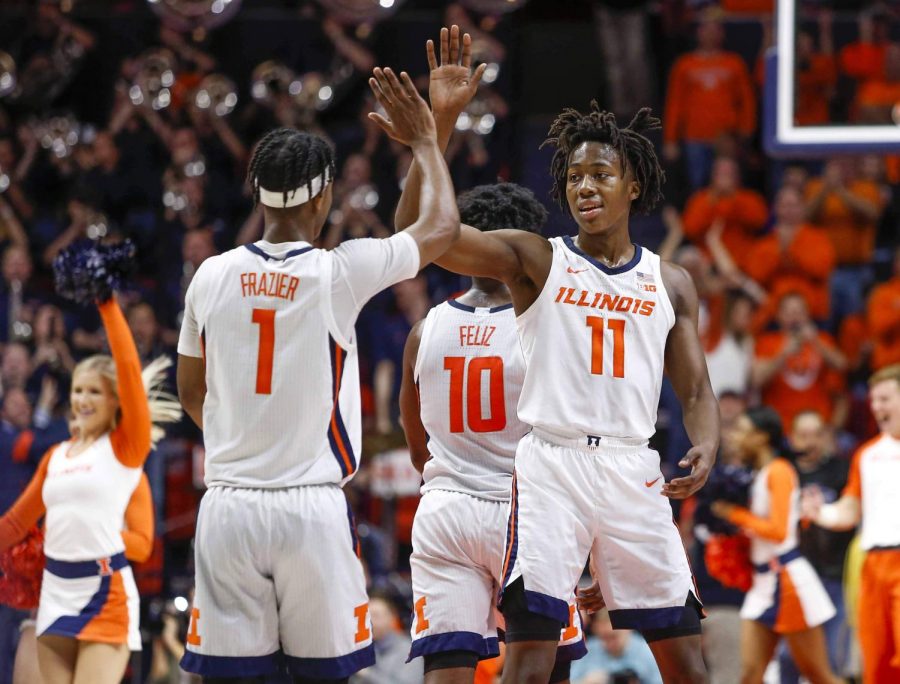 Aya Dosunmu and Trent Frazier high five each other during Illinois’ game against Nebraska on Feb. 24. The Big Ten released the 2020-2021 conference schedule Wednesday.

The Big Ten released the entire men’s basketball conference schedule on Wednesday. The Illini will start Big Ten play on Tuesday, Dec. 15. at home against Minnesota and conclude conference play on Sat., March 6, at Ohio State.

Illinois’ conference schedule appears to be favorable. They only have to play preseason ranked teams like No. 5 Iowa, No. 13 Michigan State, No. 24 Rutgers, No. 25 Michigan once. Conversely, they’ll get to play teams projected at the bottom of the conference Nebraska, Penn State and Northwestern twice.

Illinois’ schedule is now one game away from being finalized. They’ll host an MTE during Thanksgiving week, playing against mid-majors North Carolina A&T, Wright State and Ohio. They’ll travel to Indianapolis to play No. 2 Baylor on Dec. 2 in the Jimmy V Classic. Then they will travel to Duke to play the No. 9 Blue Devils in the Big/Ten ACC challenge. A few days later, they’ll go to St. Louis to take on Missouri in the annual Braggin’ Rights game.

The final non-conference game of the schedule has not been announced yet.