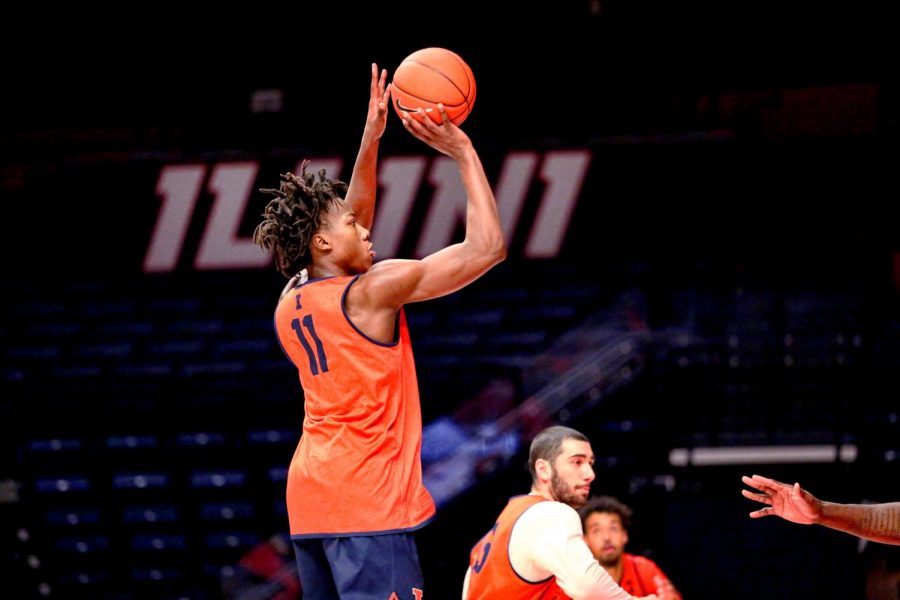 Despite not playing a game this semester, it was still a memorable few months for the Illinois men’s basketball team.

After the return of stars junior guard Ayo Dosunmu and sophomore center Kofi Cockburn in August, hype began building up around the program. Whispers of a high-preseason ranking came true a few weeks ago when head coach Brad Underwood’s squad checked in at No. 8 in the first AP Poll.

The Illini hadn’t been ranked in a preseason AP Poll since 2010-2011. Illinois was the second-highest ranked Big Ten team in the poll.

With high expectations comes a tough schedule. Illinois is scheduled to play No. 9 Duke in the ACC/Big Ten Challenge. The two haven’t squared off since 2007. Illinois will also get a test in the Jimmy V Classic when it plays preseason No. 2 Baylor.

“We’re gonna see an unbelievable Ayo Dosunmu this year,” Underwood said. “A guy that has worked very hard and was one of the best guards in the country last year. He’s ready to pick up where he left off. Part of that is not only being a first-team all-league guard but now he’s a first-team All-American.”

Cockburn also received recognition, being named to the preseason first-team All-Big Ten. Even incoming freshman guard Adam Miller got some love. In a poll on The Athletic, Miller received the most votes for Big Ten Freshman of the Year.

Illinois had some whiffs on the recruiting trail, but it made the addition of four-star wing Luke Goode official when he committed on signing day. Goode is a versatile, sharpshooting wing that should be a good complement next to current freshman guards Andre Curbelo and Adam Miller.

“He’s so multidimensional,” Underwood said of Goode. “He’s an elite passer, no matter where you put him. He became more of a facilitator than scorer, but he’s a guy that attracts a lot of attention because of his ability to shoot the basketball.”