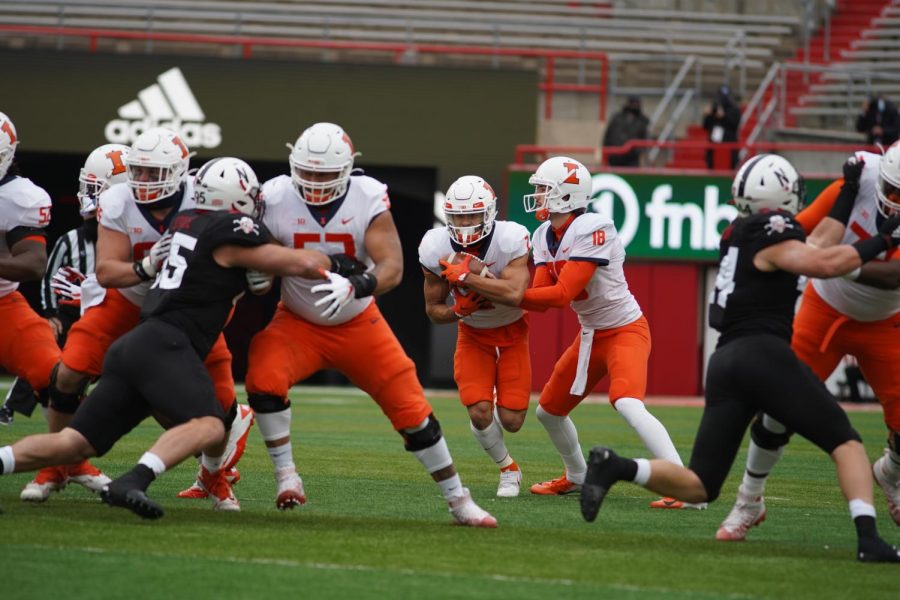 Illinois quarterback Brandon Peters hands it off to running back Chase Brown in the game at Nebraska Saturday. The Illini won 41-23.

Illinois came into Nebraska and dominated all game, defeating the Cornhuskers 41-23. The win marks the Illini’s first win in Lincoln since 1924.

The Illini looked like a brand new team on Saturday, finally near full strength after three games of COVID-19-related absences. After coming into the game with a 1-3 record and as over two-touchdown road underdogs against Nebraska, Illinois played the way they knew they were capable of and commanded the day in Lincoln.

“Our guys played well today, we deserved to win and practiced that day all last week,” head coach Lovie Smith said. “Big win for us to get two in a row… You can imagine what our locker room was like (after the win).”

Right out of the gate, Nebraska quarterback Luke McCaffrey threw a backward pass that was ruled a fumble and picked up by Jake Hansen. The Illini capitalized and scored on a Chase Brown run, setting the tone for the rest of the game.

Turnovers came up huge for the Illini for the second game in a row, forcing three in the first half and five total. On three of the five, Illinois came away with a score.

“(Turnovers) are a huge momentum change, any time the ball changes possessions like that it’s huge,” said Hansen, who also had an interception in the game. “We’ll continue to do that and propel our team that way.”

The offense’s 28 first-half points for the Illini were not only there most all season in a half but surpassed their most in an entire game.

Brandon Peters looked like the quarterback Illinois was expecting when he came to Champaign, who threw for 205 yards on the day as well as a touchdown both in the air and on the ground.

Peters’ big day was his first game since week one at Wisconsin, and despite only beginning practice earlier in the week, showed no rust from his absence.

“I prepared really well this week, I thought the game plan was really really good,” Peters said. “I didn’t really feel rusty… I was locked in mentally and physically.”

Not only did the defense force turnovers against the Cornhuskers, but they also came up with big stops that prevented the Cornhuskers from gaining momentum.

“I felt it was a lot better. McCaffrey is a good football player, especially with what he can do with his feet, so you have to have coverages designed to stop him running the football (as well),” Smith said. “Just having everyone back… Lot better job playing the pass.”

It was the second straight game that Illinois impressed in its running attack. Even without redshirt freshman Isaiah Williams starting at quarterback, the ground game looked legit.

Brown, Mike Epstein and Peters combined for 285 rush yards and four Illini touchdowns today. Epstein and Brown were both north of 100 rushing yards on the day, an impressive feat for the duo.

“They’re both excellent running backs, and we’re a running football team,” Smith said. “We make a statement, we get off the bus running the ball… When you can get your running game going like that, it’s tough on the defense.”

The run game helped mightily with third-down conversions, which Illinois was 11-17 on the day from. Third downs had been a problem in the past but were cleaned up by Rod Smith and the offense on Saturday.

One of the third-down conversions came on an Isaiah Williams six-yard run in the fourth quarter. The Illini coaching staff hinted at using both quarterbacks in some way against Nebraska, and Williams found a way to come in and make a difference when needed.

Illinois finally looked like the team they had expected to play as coming into the year, and the win Saturday marks their second straight. Coming out on top this week feels good, as the Illini have a challenge next week when they go against No. 3 Ohio State back home in Champaign.

“Moving forward, this is a huge win,” Peters said. “We all know who Ohio State is… We’re gonna have to use this momentum to our advantage and just keep working.”