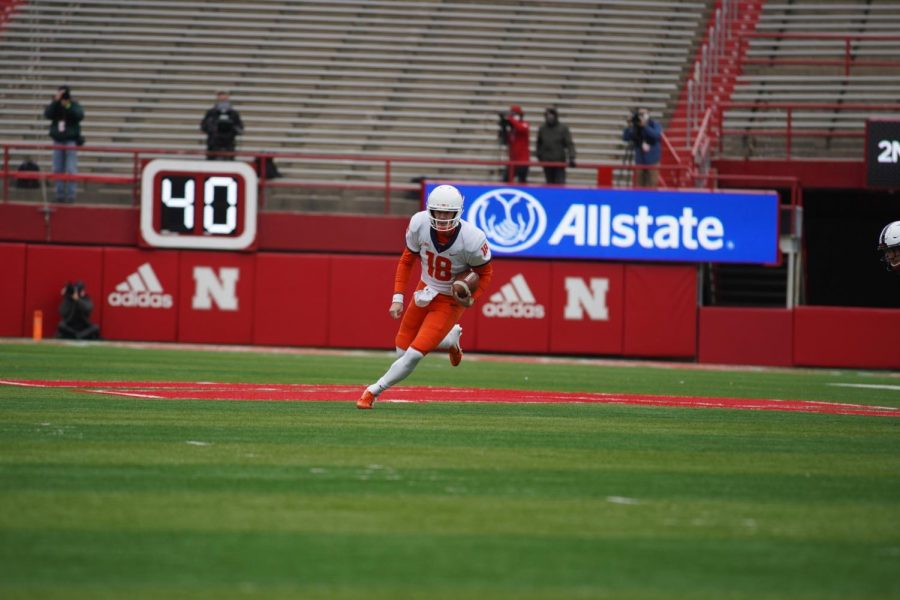 Quarterback Brandon Peters runs with the ball during the game against Nebraska on Saturday. The Illini won 41-23.

Isaiah Williams sparked excitement in a stagnant program, running for a school-record 192 yards in a comeback victory over Rutgers. While Brandon Peters was set to return this week after COVID, Williams’ performance last week made a compelling case on why he should start. He may have to wait another year.

Peters, with the help of a strong running game, took the Illini offense to a whole different level, guiding the program to its first win in Lincoln, Nebraska, since 1924.

The Illini passing game had been almost non-extinct in 2020. Even when Peters did play, the Badgers shut him down in his worst performance in an Illini uniform. But Saturday, Peters controlled the pace through the air and on the ground, providing his most efficient performance since leaving Ann Arbor.

“Isaiah was ready, but Brandon has been our starter. It isn’t his fault (he contracted COVID). Brandon can throw, and I think he did a good job leading our offense,” Smith said.

The key reason to start Williams would have been due to his legs. However, what Illinois loses is the ability to regularly keep defenses honest with the passing game. Starting Peters gave the Illini the best of both worlds.

Peters’ size — 6’5” and 220 pounds — couldn’t be any more different than Williams. However, despite the stereotypical pocket passer frame, Peters is fantastic with his legs.

Though he didn’t break the school record for rushing yards, Peters gained 36 yards on the ground on just eight carries and was especially effective on read-options plays, consistently catching the Cornhusker defense off-balance.

What is striking is how similar the start of this game was to last season’s meeting. In 2019, the Illini jumped out to a quick 21-7 lead, taking advantage of Cornhusker turnovers in their territory. The Illini offense eventually ran out of steam, with Peters managing only 78 yards through the air.

Instead of just relying on their running backs, Rod Smith trusted Peters to make plays and open up the passing game. Peters finished 18-for-25 with 205 yards, good for a quarterback rating of 81.5 out of 100.

“I prepared really well this week, and I thought the game plan was really good,” Peters said. “A big thing, our running backs and offensive line played well. When you can run the ball like that, it opens up a lot of stuff.”

While Peters was sure to credit his teammates, his ability to correct his mistakes from the Wisconsin game and prepare himself to get ready — despite missing three weeks of action — was impressive.

Peters infamously targeted Josh Imatorbhebhe way too often against the Badgers, failing to get others involved in the passing game. But on Saturday, despite a chunk of the big plays going to his favorite target, Peters got tight end Daniel Barker and wide receiver Donny Narvarro involved often, who finished with a combined eight catches.

“Donny, he’s a consistent guy who’s going to make plays for you,” Peters said. “Again, I was just taking what the defense was giving me. The middle of the field was open at times.”

The return of Peters proved preseason predictions correctly: this is the best offense in the Lovie Smith era — when healthy. The Wisconsin game was an outlier that made people doubt Peters’ ability. But looking at his track record — 21 total touchdowns last season — Peters is a Big Ten quarterback, and playing him gives Lovie the best chance to win games.

Just last week, when the Illini were trailing the Scarlet Knights 10-0, the possibility of going 0-9 seemed realistic when the defense suffered breakdowns and the offense couldn’t throw the ball. Flash forward to now, and the Illini have won back-to-back Big Ten road games for the first time since 2007.

2-3 is by no means amazing. However, the Badgers are a great team, despite their recent showing against Northwestern. If Peters played against Purdue instead of Coran Taylor, who turned the ball over four times, it’s possible the Illini win that game, too, and sit at 3-2 heading into Ohio State week.

With Peters probably gone next season, Williams will take the reins of the quarterback position under Lovie Smith — the head coach isn’t going anywhere now after the past two weeks. But if Lovie wants the chance to truly make this his best season yet with Ohio State, Iowa and Northwestern up on deck, the dual-threat Peters will be the man to lead them.

“If we’re going to win, we got to play like this every game,” Peters said. “We got a tough schedule coming up. (Let’s) use this momentum to our advantage and keep building.”