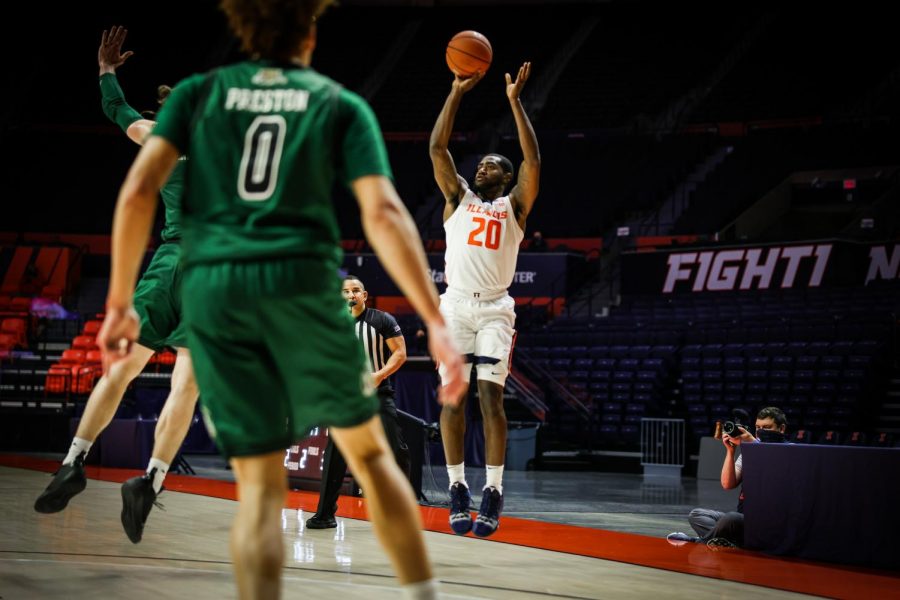 With 40 seconds left in the game against Ohio on Friday, Illinois faced a 73-71 deficit. Ayo Dosunmu made a bounce pass to senior guard Trent Fraizer at the top of the arc. Somewhat of a three-point specialist himself, Frazier was able to draw the defender in the air with a pump fake, drive left to the lane, take one dribble and find a wide-open Da’Monte Williams just waiting in the right corner.

Now if this was November 2019, fans might not have felt confident in Williams to make the three to put the Illini up one. But this is 2020, and the shot fell into the hoop. Nothing but net.

“I was wide open,” said Williams. “Just step in and (shot) it with confidence.”

In three games this season, Da’Monte Williams is shooting 67% from the three — converting six of nine attempts— and three of those three-point makes came against Ohio. In a small sample size, Williams is showing that he is both willing and able to shoot threes to help out the Illinois offense.

Williams hasn’t always been known for his ability to score from behind the arc. In his first two seasons with Illinois, 65 games, he shot 81 threes, making only 22. Williams wasn’t a three-point asset. The three remained absent from Williams’ game for most of his junior season. In the first 23 games of the 2019-20 season, Williams made four threes on 29 attempts.

The thing that kept Williams on the court was his versatility in other aspects. Williams rebounds well, averaging eight a game this season. He can make the right passes, and he can defend almost anyone on the court. He is someone head coach Brad Underwood praises a lot.

Underwood said after beating Ohio that Williams was the player of the game. Not because of the three he hit, but because his energy was the best on the team which meant a lot in this game for a team that didn’t have a lot of it.

“He’s excelling in his role on this team, and that’s special,” Underwood said about Williams after the Illinois win against Penn State in February of last season. In that game, Williams had recorded four rebounds, four assists, two blocks, a steal, but not a single point. Williams going scoreless didn’t matter to Underwood, though.

After the Penn State game, though, Williams started to put it together behind the three-point line. To finish the season, Williams shot 5-11 in the last five games from behind the three. Before that, Underwood had talked about how well of a shooter Williams was in practice. Williams shot it as much and as well as anyone on the team during practices last season.

“It’s just a matter of seeing those things go in,” Underwood said about Williams after a win against Michigan State last season.

In Williams’ last eight games, he’s seen the ball go in a lot. With the three games this season, and the final five of last season, Williams is shooting 11 of 20 from behind the three-point line. If Williams continues the three-point pace he is at for this season, he will shoot 81 three-pointers by the end of the Big Ten season, matching his attempts for his freshman and sophomore year combined. Even if his 67% cools down to an overall 35% for the whole season, at this pace he’ll hit at least one three a game.

This doesn’t mean that Williams is going to lead the Illini deep range attack by any means, but what it does mean is that he will have to be respected from behind the arc. Teams won’t be able to sag off Williams to help with Kofi Cockburn’s 7-foot 285-pound frame or slide in to help with Dosunmu’s driving ability without risking giving up the three. This makes Illinois’ offense, which can be stagnant in the half-court, have more shooting options without having to sit a key defender like Williams.

Williams has shown that he can hit the three consistently. Now, like his team tells him, he just has to shoot it.

“I actually got on him early in the first half,” said Dosunmu after the game against Ohio. “They were blitzing my ball screens the whole night, and I put it right in his shooter’s pocket and he didn’t shoot it. He hesitated. I’m like ‘C’mon Monte, like you’re a great shooter I see you put the work in each and every day. Be ready to shoot.’ He told me ‘alright.’ No bickering, went on to the next play and you see down the stretch, we believe in him and he stepped up there and made it.”