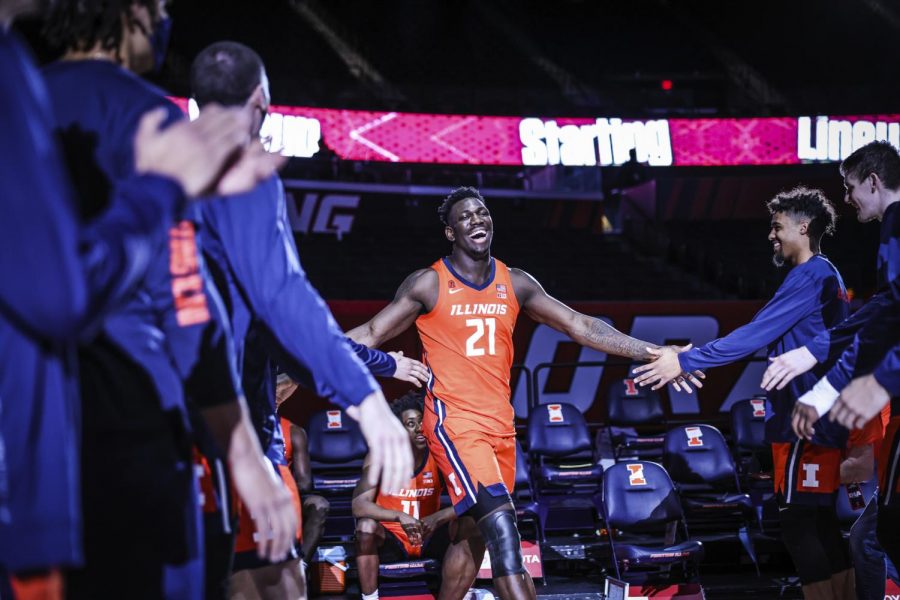 Sophomore Kofi Cockburn high-fives his teammates as he enters the court during the game against Chicago State on Thursday. The Illini won 97-38.

The hype surrounding No. 5 Illinois will be put to the test on Wednesday night when the team travels to Indianapolis to take on No. 2 Baylor. While neither is a blue-blood program, the Bears went 27-4 last season and return All-American guard Jared Butler (16 points, 3.1 assists per game last season), as well as sharpshooter Macio Teague and All-Big 12 defensive team members Davion Mitchell and Mark Vital.

Baylor has looked the part early, beating Louisiana-Lafayette by 30 and Washington by 34. Let’s break down some of the biggest questions heading into this game.

Can Illinois stop the pick-and-roll?

After being crushed by Ohio in the pick-and-roll on Friday, Illinois will see more of the same on Wednesday as Baylor runs a ton of it.  Butler, in particular, is a maestro in that regard. He used ball screens in 27.9% of his offensive possessions last season, finishing in the 91st percentile. Butler can shoot off the screen, or use his dribble patience to coax defenders in. If he draws in the weak side defender, Butler is more than capable of making a skip pass to a corner shooter. If the weak side defender stays put, that puts the center in a tough spot.

On offense, Baylor loves to spread teams out with shooters in the pick-and-roll. Here, AA guard Jared Butler shows his patience and when the bottom defender helps on the roll, he makes a great read to Adam Flagler for three.

Illinois' will have to improve on PnR defense. pic.twitter.com/WVlIPrPInC

Illinois played primarily drop coverage with Kofi Cockburn on Friday, and it was not effective as Ohio guard Jason Preston carved them up. Butler is an even better player than Preston and has more help on the wings. The Bears are shooting 28-56 in two games.

Can Kofi Cockburn dominate inside?

On paper, the center position is Illinois’ one clear advantage on the floor. Baylor lost its best centers in Freddie Gillespie and Tristan Clark this offseason and aren’t enormous up front. The Bears have been starting 6-foot-10 junior Flo Thamba. Thamba played under 10 minutes per game last season and lacks the upper body strength to theoretically bang with Cockburn.

For Illinois to win, Cockburn will have to be the best version of himself. He’ll need to limit his turnovers and finish consistently inside. Baylor isn’t overly tall, so the Illini will need to win the rebounding battle and that starts with Cockburn.

The common theme in Illinois’ wins last season was Dosunmu being the most dominant player on the court. But I’m not sure he’s faced a defender like Mitchell. The Baylor guard has incredibly quick hands and feet and constantly pressures the ball-handler.

Hounding point-of-attack defense from Davion Mitchell leads to a steal and score pic.twitter.com/LnmhZ86Tmf

For Dosunmu, it will be a great test to see how far he’s truly come this offseason. He’s got the size and strength advantage over Mitchell but will have to be tight with his handle and finish through contact. Dosunmu doesn’t need to have a career-night, but Illinois needs him to be able to beat Mitchell off the dribble.

Can Da’Monte Williams provide a bigger spark than Mark Vital?

Both the Illini and Bears play small, with untraditional four men. The 6-foot-3 Williams showed his defensive versatility as well as an improved three-point shot last weekend. But in Vital, Williams is meeting a similar, bigger version of himself. Vital is only 6-foot-5, but his wide frame allows him to be a very effective power forward.

Like Williams, Vital is a non-scorer (career 6.7 points per game and 14% and deep), but he’s a super impactful defender. Vital has made two Big 12 All-defensive teams in three seasons, largely due to plays like this.

Mark Vital as a switchable 5 has been such a weapon for Baylor. Watch here as he messes up a switch, but he's such a quick-twitch athlete that he recovers no problem to get a block. Then runs the floor so hard he gets Makai Mason wide open for a transition 3. Super fun player. pic.twitter.com/CFi0m22CLf

While stars Dosunmu and Butler will be the guys to watch, this game could come down to the minute details. Vital and Williams are two of the best “glue guys” in the country, and they’ll need to fulfill their roles.

Which bench will produce more?

Illinois’ bench looked terrific through the first two games of their MTE but was largely mitigated against Ohio on Friday, scoring just seven points. With Austin Hutcherson still injured, Underwood resorted to a seven-man rotation in the second half. Illinois is going to need more out of Giorgi Bezhanishvili, Andre Curbelo and Jacob Grandison on Wednesday as the Bears do not lack depth. Sophomore transfer guard Adam Flagler has already blended into Baylor’s offense, scoring 14.5 points per game and shooting 7-14 for deep. Freshman guard LJ Cryer has also flashed offensive prowess, scoring 8.5 points per game. They also have energetic big man Jonathan Tchamwa Tchatchoua, who has looked good thus far.

Illinois will need Bezhanisvhili to look like his freshman self and Curbelo to cut down on the turnovers and create for his teammates.

Illinois will enter Wednesday night as underdogs, but an upset is certainly possible. To beat a disciplined and experienced team like Baylor, though, they’ll need to play exceptional, but this group certainly has it in them.