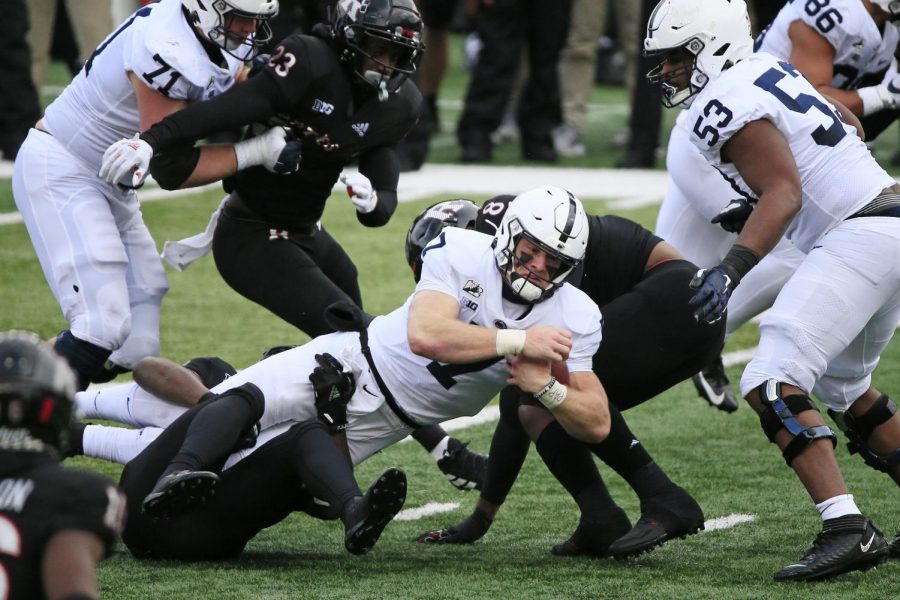 Penn State’s Will Levis (7) picks up yardage on the ground during the second quarter against Rutgers at SHI Stadium in Piscataway, New Jersey on Saturday,

You couldn’t have pictured a better start against the No. 19 team in the country, a team the Illini had not beaten since 2008. Scoring two touchdowns on the team’s first three drives, it looked like Illinois had continued to roll after a dominant performance against Nebraska two weeks ago. The defense also looked solid for the first quarter and a half, holding Iowa to just two first downs on its first four drives. Once the Hawkeye offense found its groove, however, the Illini defense couldn’t respond or get any stops en route to a 35-21 loss on Senior Day. While there’s plenty to discuss about Illinois’ performance at Memorial Stadium on Saturday, let’s take a look around the Big Ten on the conference’s penultimate regular-season match week.

After starting the season 0-5, the worst start in program history, Penn State knocked off struggling Michigan at The Big House to get off the schneid last week. Rutgers, on the other hand, knocked off a Purdue team that’s on the decline, picking up its second win of the season last week, the program’s most since 2017. It was the Nittany Lions who kept their momentum going, knocking off the Scarlet Knights on the road 23-7.

Despite losing the turnover battle 2-1, Penn State got off to an early 7-0 lead via a 29-yard touchdown pass from quarterback Sean Clifford to freshman receiver Parker Washington. After a field goal and a touchdown run from Devyn Ford, the Nittany Lions cruised into halftime with a 17-point lead and never looked back, with the defense holding Rutgers to just 205 total yards of offense over the span of the game. The Penn State run game also proved to be the difference, rushing for 248 yards on the ground.

Both teams look to close out the regular season on a strong note and improve their respective positions in the Big Ten East standings, as Penn State returns home to face Michigan State while Rutgers travels to College Park to take on Maryland.

Purdue’s back-to-back wins over Iowa and Illinois to open its 2020 campaign now look to be an outlier after five straight defeats, while Nebraska snapped its two-game skid and possibly surprised a few critics in its Week 7 win on the road against Purdue.

Scoring on each of your opening five drives will always give your team a good chance of winning, and that is exactly what the Cornhuskers did in West Lafayette on Saturday. Nebraska entered halftime after a near-perfect first half: the offense scored 27 points, the special teams unit blocked a punt and the defense made a big stop on fourth-and-1.

Purdue failed to establish a run game, rushing for an abysmal -2 yards as a team, and despite an impressive performance from quarterback Jake Plummer, who threw for 334 yards, three touchdowns and zero interceptions, the Boilermakers couldn’t make stops on defense when it needed it most. Purdue receiver David Bell had another solid game, finishing with 132 yards and one touchdown, while Nebraska standout receiver Wan’Dale Robinson finished with 114 yards. Despite recent inconsistencies, Cornhusker quarterback Adrian Martinez played well, throwing for 242 yards and one touchdown, though he also ran for two scores on the ground.

Nebraska looks to extend its win streak against Minnesota next week, while Purdue faces a tough task against in-state rivals Indiana on the road.

Undermanned might be an understatement in regard to how Ohio State entered this week’s matchup with Michigan State, with 23 players listed as unavailable, along with head coach Ryan Day, co-defensive coordinator Greg Mattison, quarterbacks coach Corey Dennis and special teams coach Matt Barnes. Despite the adversity, the Buckeyes once again proved why they’re one of the best teams in the country in a dominant 40-point win in East Lansing.

With assistant head coach Larry Johnson at the reins, Ohio State didn’t make a wrong step on Saturday. The Buckeyes cruised in the first half, allowing only three first downs while also scoring on a pick-six. Justin Fields rushed for two touchdowns and threw for a score, giving the visitors a 28-0 lead at halftime.

The second half wasn’t much different, though the Spartans were able to get on the board via a 20-yard touchdown pass from back-up quarterback Payton Thorne in the third quarter; starting quarterback Rocky Lombardi left the game with an injury in the second quarter after getting sacked. He struggled before being removed, going five-for-11 with 33 yards and an interception.

Michigan State aims to close out its regular season campaign next week with a win over a Penn State team coming off back-to-back wins. Meanwhile, Ohio State needs to play Michigan to qualify for the Big Ten Championship, though that may be in jeopardy due to a COVID-19 outbreak in Michigan’s program. There are rumors that Big Ten athletic directors may vote to allow the Buckeyes to advance to the conference championship regardless of whether or not the game happens, but the status of the team’s matchup with the rival Wolverines is currently unclear.

This matchup of two ranked teams was arguably the most anticipated among this week’s games, and despite losing starting quarterback Michael Penix Jr. to a season-ending anterior cruciate ligament injury, the Hoosiers got the job done on the road, defeating the Badgers in a low-scoring affair.

Sophomore Jack Tuttle notched his first career start on Saturday, filling in for Penix Jr. who set career-highs in passing yards and touchdowns before tearing his ACL in last week’s win over Maryland. Quarterback Graham Mertz made his fourth start of the season, as he replaced starter Jack Coan after Coan suffered a foot injury during preseason camps.

Indiana entered the game as one of the best offensive teams in the Big Ten, while Wisconsin came in with the fewest average allowed points per game on the defensive side of the ball. In a low-scoring contest, the game came down to which team could convert when called upon, and Indiana rose to the challenge despite producing only 217 total yards of offense, with Tuttle throwing for two touchdowns in the win, the first of his career.

With the win, Indiana ties a program record with six Big Ten wins while also beating Wisconsin for the first time since 2002. Oddly enough, the Hoosiers still have a slim chance of qualifying for the Big Ten Championship if Ohio State’s matchup with Michigan gets canceled due to a COVID-19 outbreak in the Wolverines squad. Regardless, Indiana will play in-state rival Purdue at home next week, while Wisconsin looks to close out a season shortened by a COVID-19 outbreak within its own squad against a surging Iowa team coming off five straight wins.

In true COVID-19 fashion, Northwestern officially won the Big Ten West division and qualified for the Big Ten Championship despite not even playing this week, though their opponent (likely Ohio State) is still up in the air. The Wildcats will face the Illini in Evanston next week.

Minnesota looks eligible to return to action following a COVID-19 outbreak within its squad, though the team was forced to cancel its last two games. The Golden Gophers will travel to Lincoln to take on the Cornhuskers if they receive approval from conference officials.

After canceling two games within its own program due to a COVID-19 outbreak, an opponent forced Maryland to sit out once again, with Michigan currently dealing with an outbreak of its own. The Terrapins will host Rutgers to close out their regular season.

Michigan has currently paused all team activities following an outbreak within its team, and the program will finish the season without a home win for the first time in school history. If the team is able to play next week, they will take on Ohio State in a game that could have major conference title and college football playoff implications.