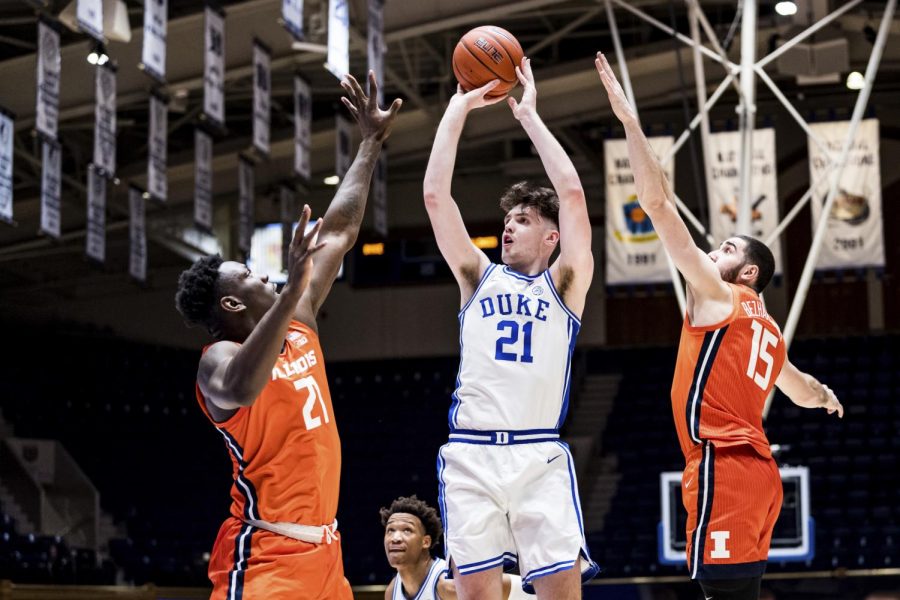 Illinois players Kofi Cockburn and Giorgi Bezhanishvili attempt to block a shot from Duke’s Matthew Hurt during the game between the two teams on Tuesday. The Illini won the game 83-68.

If one thing has been clear about head coach Brad Underwood’s tenure as the Illinois men’s basketball coach, it’s that he wants defensive identity to be the backbone of his team. That defensive identity is still growing in the early season, but it’s what could make this team great.

When Illinois lost to Baylor, they faced a defense that’s for real. Baylor dictated what the Illini offense could do, notably in the first half. In that opening period, Illinois’ leading scorer, Ayo Dosunmu, was limited to three points. At the half, junior Giorgi Bezhanishvili, who has taken a back seat in scoring since his freshman season, had 13 of Illinois’ 30 points.

The Illini were forced to take a lot of bad shots and it showed in their field goal percentage, as Illinois shot only 3-10 from three in the first half and turned the ball over 12 times throughout the entire game. To Illinois’ credit, they played their fair share of defense as well, limiting Baylor to only 31 points in the first half. Illinois’ defense kept them in the game until around the 10-minute mark of the second half, where Baylor just outlasted Illinois.

After the game, Underwood acknowledged the difference between Illinois and Baylor that Wednesday night.

“Losing is not an option, but if you’re going to get beat you need to learn from it because the feeling stinks,” said Underwood. “Why their guy dives on the floor for a loose ball and our guy doesn’t? Watching Davion Mitchell never miss an assignment defensively and how much they talk and communicate.

“That’s one of the biggest issues we have with our new guys is talking and communication. If (the media) could’ve been there you would’ve heard Baylor talking defensively in the upper deck. Those are the things we have to continue to grow from and that’s the accountability side of things that Baylor has and we have to continue to learn from.”

In an 83-68 victory over Duke, Illinois was able to mirror Baylor’s defensive ability to force their opponent into looks they don’t want. Duke is not a great three-point shooting team outside of its leading scorer, Matthew Hurt. Illinois gave up 22 three-point attempts, but it only resulted in five three-point makes. Matthew Hurt, who was 8-of-9 inside the three-point arc shot 0-6 from beyond it. The only Duke player to shoot above 50% from three was DJ Steward (3-of-5 from three) who was forced into tough shots and made some. Illinois was also able to put Hurt into early foul trouble with three in the first half, which limited what Duke’s offense could do. Underwood commented on how scouting was the difference between the shot defense against Duke in comparison to Baylor.

This defense has established itself early this year, but there’s still a lot to be done. As a defense, Illinois ranks last in the Big Ten in total turnovers forced and turnover margin, losing 4.75 more possessions than they take away each game. They are in the middle of the pack in the Big Ten when it comes to opponents scoring and both field goal percentage and three-point percentage. However, they are an elite rebounding team early in the season, leading the Big Ten in offensive rebounding and coming in second at defensive rebounding. That helps when you have one of the best rebounding guards in the country in Dosunmu.

It is still early in the season, though, meaning there is still a lot of time to make improvements. Those improvements started against Duke, specifically with Bezhanishvili.

“I love (Bezhanishvili) defensively right now,” said Underwood. “Because he’s talking and he’s energetic and we’re a better team on the defensive end when he’s out there.”

Bezhanishivili isn’t the only player to flash improvements, though. Earlier in this season, specifically against Ohio, Kofi Cockburn looked to be somewhat of a liability when he was switched on to a player that could move quickly and was a perimeter threat. However, Cockburn defended well on the perimeter against Duke, closing out on shooters a couple of times and influencing misses.

If Cockburn can become a more reliable defender on the perimeter, it will close up some weaknesses that Illinois’ defense has.

“Fabulous,” said Underwood when asked about Cockburn’s perimeter defense. “We practiced it for a couple of days. We knew he was going to be in those actions. We talked to him a lot about just making sure he had a hand up, making sure they shot it over that 7-foot-4 wingspan, and then just being able to move his feet.”

Growth isn’t exclusive to the experienced big men though as the freshmen guards Andre Curbelo and Adam Miller are also coming along on defense. As mostly perimeter defenders, they are having to replace Andres Feliz who was one of Illinois’ best defenders in his two years at Illinois.

Underwood always talks about his team’s willingness to learn and improve on the defensive end of the ball. This effort can be seen in the multiple charge calls that Curbelo has taken this year or Miller’s eagerness to dive for the ball even when the team was up 12 in the second half against Duke. After the game, Dosunmu called that play “winning basketball.”

This team will face challenges on the offensive end as the season goes along, playing in arguably the best conference in college basketball and having to see teams like Iowa, Rutgers and Michigan State. Defense will no doubt have to continue to improve in order to match the offensive production that the Big Ten brings.