Illinois gets handled in 28-10 loss at Northwestern 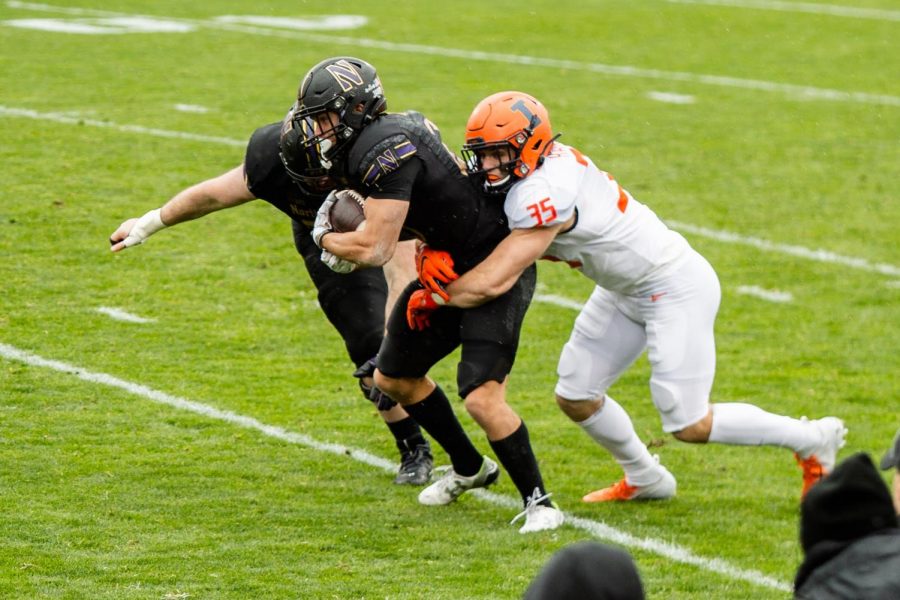 Illinois linebacker Jake Hansen tries to tackle a Northwestern player in the rivalry matchup on Saturday afternoon. The Illini lost to the Wildcats 28-10.

Evanston, Illinois — On a cold, rainy Saturday, Illinois football had hopes of beating a rival and reviving a disappointing season. But, Northwestern had other plans including an elite running attack and a disciplined defensive performance. And for the seventh-straight time, the Wildcats held on to the Land of Lincoln Trophy, dominating the Illini 28-10.

Illinois was shorthanded from the jump, though. Prior to the game, the Illini announced safety Tony Adams was out due to a positive COVID-19 test and cornerback Nate Hobbs was out due to contact tracing. Other defensive starters — Sydney Brown, Roderick Perry, Khalan Tolson and Jamal Woods — were also out due to injury. The Illini also announced junior linebacker/safety Delano Ware quit the team earlier this week.

While the Illini’s run game started strong, it slowly faded and with starting quarterback Brandon Peters throwing 3-14 for 21 yards, the offense managed 262 yards. Northwestern, however, saw monster games from running backs Evan Hull and Cam Porter, rushing for 147 and 142 yards, respectively. Porter, a true freshman, had only rushed 32 yards before playing Illinois.

Illinois kept things competitive in the first half with a two-score game, but Northwestern’s rushing attack broke things open in the second half. In the last 30 minutes alone, the Wildcats had 242 rushing yards, finishing with 493 total yards.

The Illini defense brought the energy early in Evanston, with Devon Witherspoon recovering a fumble on Northwestern’s first offensive play of the game. A penalty after the play pushed the Illini back to the Northwestern 21-yard line and Rod Smith’s offense couldn’t capitalize as James McCourt missed a 32-yard field goal attempt.

“When you have a rivalry game like this you want to start it off the way we started,” head coach Lovie Smith said. “Taking the ball away on the first play, but to not get any points then took away that momentum that we had early on. The rest of the day was kind of that way.”

After 31 yards from Wildcats quarterback Peyton Ramsey, the Illini forced a punt — the only punt of the half for Northwestern.

Brown’s quick 36 yards set up back-to-back first-down runs from him and Peters and got Illinois to the Northwestern 13. But after Peters threw a backward pass, Rod Smith went to Isaiah Williams for the first time Saturday on 2nd and 17. Two failed rushing attempts from Williams brought McCourt back out, who made the 39-yard FG attempt.

That would be Illinois’ only score of the half. The Wildcats’ run game came alive to end the first quarter with consecutive 20-plus yard runs, setting up a two-yard touchdown pass from Ramsey to Charlie Mangieri to begin the second quarter.

The Illini offense quickly stalled again with Peters back at quarterback but was rejuvenated by Blake Hayes’ second fake punt attempt of the season. A couple of incomplete passes from Peters to Josh Imatorbhebhe set up a 53-yard attempt from McCourt, resulting in his second miss of the day.

Both defenses held strong as Illinois forced a turnover on downs, but got hit with a targeting penalty from Derrick Smith then Northwestern held Williams to a three-and-out. The Wildcats would take up the next seven minutes with a 17-play touchdown drive, converting four fourth-down attempts along the way. Illinois went into halftime down 14-3.

Northwestern picked up right where it left off, playing their most dominant stretch in the third quarter, totaling 163 rushing yards and 14 points. In the Wildcats’ first two drives of the quarter, they scored two rushing touchdowns — an 18-yarder by Porter and a 32-yarder by Evan Hull.

The Illini, however, put up their worst performance in the third, totaling just four yards of offense while being held to two three-and-out drives.

“When we’re going three-and-(out) we’re not helping the defense,” Brown said. “And as you guys saw today, we’re pretty depleted in that area. We knew that we had to keep the defense off the field. Then we go 3-for-12 on third downs, that’s horrendous and as an offense, we need to be better.”

With Isaiah Williams behind center in the fourth, the Illini scored one more time with a 46-yard touchdown pass to Brian Hightower. Williams finished with 86 passing yards and 38 rushing yards.

The Illini have one more chance to end the season on a positive note, with the plus-one game coming next weekend. The opponent has yet to be decided, with five teams in the Big Ten East sitting at two wins.