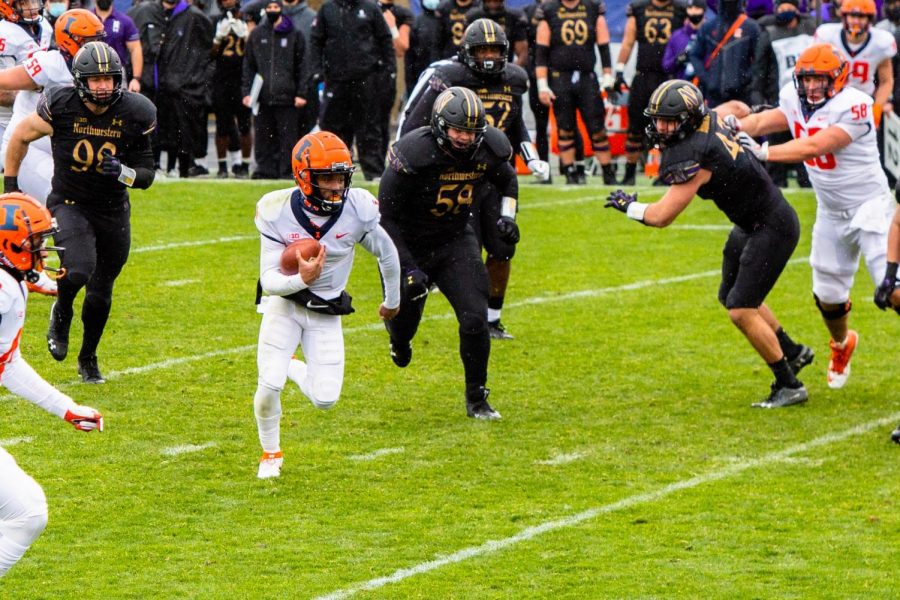 Quarterback Isaiah Williams runs the ball in Illinois’ game against Northwestern Saturday afternoon. The Illini struggled in all areas of the game, falling 28-10.

The Land of Lincoln Trophy will stay in Evanston, Ill. in the trophy cases of Northwestern football after the Illini fell to the Wildcats 28-10. In a game that saw wind, rain and some snow, the focus of both teams was the run game. It worked well for Northwestern, but Illinois struggled to find any offensive consistency as it dropped its sixth straight game to rival Northwestern.

The Illini fall to 2-5 to finish out the regular season and end just above Nebraska at the bottom of the Big Ten West because of the tie-breaking win Illinois has above Nebraska.

Shortly before the game, Illinois Athletics announced senior defensive back Tony Adams had tested positive for COVID-19 and, due to contact tracing protocols, the Illini would be out a second defensive back in Nate Hobbs.

With those two, the Illini were missing a total of seven defensive players. Sydney Brown, Rodrick Perry, Khalan Tolson and Jamal Woods were also out. The Illini were only able to bring 21 scholarship players on defense to fill out their roster. During the game, Derrick Smith was thrown out because of a targeting call when he was trying to defend a pass. Doug Kramer also could not finish the game as he suffered an injury during one of the plays.

Not only has Northwestern not been a great running team this year, they really haven’t even been good. Outside of their first game against Maryland in which they rushed for 325 yards, Northwestern had only averaged 91.6 yards a game. Against Wisconsin, they only rushed for 24 yards. This was not the case against Illinois as Northwestern had two rushers over 140 yards and had a total of 411 on the game.

Northwestern broke big run after big run and the Illinois defense had no answer for it. Northwestern was able to rush on every down no matter the distance really, converting on multiple fourth downs on the ground to keep the drives going.

“We just have to tackle better,” said defensive back Quan Martin after the game. “We missed a few tackles that led to big runs and explosive plays.”

Against Iowa, redshirt freshman Isaiah Williams filled in for a struggling Brandon Peters in the fourth quarter and played well in his time. After the Iowa game, head coach Lovie Smith said the team knew who was going to start against Northwestern, but would not reveal it until the Northwestern game. That starter was Brandon Peters, seemingly etching out any further questions about who the quarterback would be.

Those questions started to rise again after Williams replaced Peters for short stints in the first and second quarters. Williams did not have much production and the coaching staff elected to go back to Peters for most of the game. That was until the fourth quarter where Williams stepped in at the position for a second week in a row.

Williams looked good, going 4-8 with 86 yards and a touchdown in his first drive. His completion percentage might have been a little higher as well if it weren’t for a few drops by some of his receivers. It was a performance that was reminiscent of what he did against Iowa, coming in and providing a quick spark and some offense to the Illini. But the question remains, when will Williams morph from the spark to the fire and be the first option for this Illinois offense?

Whether that time comes next week in the final game of the season, or next year, Williams has proven himself of having the potential of being a legitimate starter for this team. While it is doubtful that Illinois will stray from their QB1 in the last game of his senior year, nothing is out of the question for a team who is looking for a third win.

In a cold and wet game, everyone knows what the game plan will look like — a run-heavy attack with limitations on the passing game. However, Illinois could not keep up with the enormous rushing totals that Northwestern put up in the game.

The Illini looked to be on a good pace on the third drive of the game as Chase Brown rushed for 47 yards on that drive, but they only ended the drive with three points after Peters threw a backwards pass that resulted in a seven-yard loss. The Illini had to settle for a James McCourt field goal attempt. Brown finished the game with only 14 attempts and 70 yards on the ground.

When the run game was stopped by Northwestern and Illinois resorted to passing the ball, it didn’t go in their favor either. Sub-par accuracy coupled with a lack of playmaking by the receivers resulted in seven total completions with 22 attempts, only three of those coming from Brandon Peters who was 3-14 for 21 yards.

Those three points were the only points the offense would score until Williams threw the over the shoulder touchdown pass to Brian Hightower in the fourth quarter. Northwestern is a top tier defense in the Big Ten, but to compete, the Illini would have had to put more points on the board. They did not.

The offense finished with 155 rushing yards and 107 passing yards.

The defense started about as well as one could. After a bomb of a punt by Blake Hayes that put Northwestern at their own two-yard line, Quan Martin forced a fumble that was recovered at the six-yard line. But, what would have been a six-yard drive to a touchdown turned into 21 yards because of an unsportsmanlike penalty on Illinois’ Calvin Avery.

The defense continued to stop Northwestern until the last drive of the first quarter which had Northwestern at the goal line to start the second.

The Northwestern offense then put up 28 unanswered points on the Illinois defense, rushing for a total of 411 yards and three touchdowns and passing for 82 yards and a touchdown on only 7-12. They converted on 5-7 fourth-down attempts that kept the Illini in the game. What seemed like the back-breaking drive was when Northwestern completed a 17-play drive that lasted over seven minutes. In that drive, the Illini gave up three fourth-down conversions.

The defense was depleted this week, but bad tackling angles, missed tackles and being beat on the line of scrimmage consistently led to a very long day for the defense.