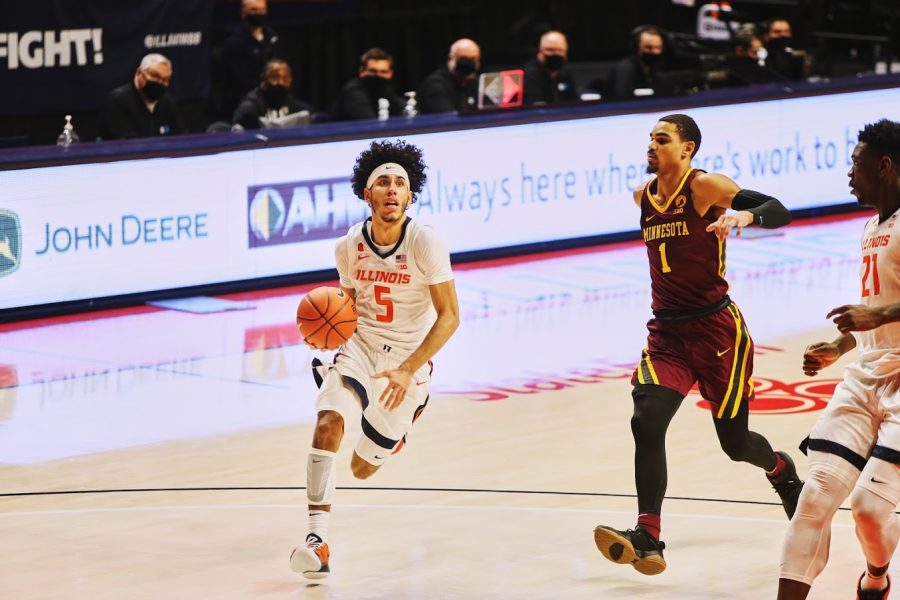 Freshman Andre Curbelo drives towards the basket during the game against Minnesota on Tuesday. The Illini won the game 92-65.

In basketball, it’s rare to see a player take over a game with just passing. It’s even rarer for said player to be a freshman.

But that’s exactly what Andre Curbelo did on Tuesday night against Minnesota. With his team trailing 18-10, Curbelo checked in and immediately made his presence felt. Using his crafty dribbling moves, he blew past Minnesota defenders, drawing a shooting foul and converting both attempts. On the ensuing offensive possession, Curbelo used a spin move to beat his defender. He then rose up and made it seem he was going to shoot a layup, causing Minnesota center Jarvis Omersa to leap. This opened a passing lane to Kofi Cockburn, which Curbelo saw as he dropped the ball off to the center for a slam dunk.

Earlier in the season, Curbelo and Cockburn were not on the same page. Cockburn had admitted he wasn’t used to a passer like Curbelo. But on Tuesday, the two finally looked in sync and showed just how special they can be as a pick-and-roll duo.

“He sometimes makes passes that nobody expects him to make,” Cockburn said of the freshman. “He sees the floor differently. I just have to start getting used to that. I’ve never played with someone like him that has that vision.”

Curbelo tallied in two more assists on following Illinois possessions and the game was tied.

As soon as he stepped foot in Champaign, Curbelo blew away teammates with his work ethic and skill.

“One thing that has impressed me about ‘Belo is his level of maturity that he’s come in here with,” senior Tyler Underwood said. “I was not that mature at 18. The way he carries himself. He acts like a professional, he works really hard and he asks questions and wants to be coached. He wants to learn.”

So naturally, expectations were high for the four-star guard entering his freshman season, but his start was anything but smooth. The passing flashes were there, but Curbelo wrapped up the first three games with seven assists and 10 turnovers. To make things worse, he rolled his ankle against Chicago State in his second game.

The bad luck continued. He suffered a concussion in practice leading up to a matchup with No. 2 Baylor. After a collision in practice, he brushed it off and began a shooting drill. But as soon as he gazed up at the ceiling, he had a headache. Curbelo checked in with the trainers and was diagnosed with a concussion.

After the up-and-down beginning to the season, Curbelo admitted having a concussion was challenging. He felt he had made strides in practice and the injury offset him a bit. Nonetheless, he was cleared in time for the Baylor game.

Against the No. 2 Bears, in a nationally televised contest, Curbelo looked like the point guard many Illini fans were expecting. He brought a spark off the Illinois bench, going for 11 points, four assists and just one turnover. It wasn’t the first time Curbelo had played on ESPN. His senior season, Curbelo’s Long Island Lutheran High School team challenged national powerhouse Sierra Canyon.

Sierra Canyon entered as a heavy favorite but behind a triple-double from Curbelo, LuHi pulled off the upset. Curbelo felt like the underdog in that game, but he’s carried that feeling since moving from Puerto Rico. That mindset fuels him every time he steps on the court.

“I think coming from Puerto Rico coming to New York, nobody knowing who I am, I was always the underdog,” Curbelo said. “At LuHi, everybody thought Sierra Canyon was going to beat us and all these big-time teams was going to beat us, I liked that. I like when people talk. I take that to my advantage. I want to prove people wrong.”

Since the Baylor game, Underwood has lengthened Curbelo’s leash, and he’s run with it. He’s averaging 11.5 points and 4.8 assists with just 2.5 turnovers per game in 21.5 minutes per game. He has a team-high 16.5 assists per 40 minutes.

Curbelo is not only effective, but he’s also creative. He plays with a flair that Illinois fans have not seen in quite some time. He’s good for a few passes a game that draw murmurs of “oooooh” from socially distanced writers throughout the arena. That creativity and flair have rubbed off on his teammates.

“It’s always fun to play with someone that brings that flash and that intensity,” fellow guard Ayo Dosunmu said.

Curbelo is by no means a finished product or a complete player. He still has his warts, particularly on the defensive end where Underwood has stressed he needs to see improvement. While the turnovers have slimmed down, he still gets overambitious at times. On Tuesday, Curbelo attempted to throw a bounce pass through two Minnesota defenders to a cutting Giorgi Bezhanisvhilli. The ball was kicked out of bounds and Curbelo was pulled, leading to a conversation between the freshman and his coach.

This didn't work and he was ultimately pulled for it, but the fact that Andre Curbelo even attempted this pass is insane. His belief in himself as a passer is incredible. pic.twitter.com/9NlggnXX9e

“The one thing that I want him to understand is that he thinks everybody is going to catch every pass that he throws and that’s a great mindset to have. He’s very capable of that,” Underwood said. “But I thought he threw that one a little too early to Giorgi where he was going to put Giorgi in a tough spot to have to do something with it. And just understanding that if he waits for another step or two, it’s a different angle to pass it.”

With Tuesday’s game well out of hand, Underwood let Curbelo run with the reserves and Curbelo used that freedom to his advantage. He dribbled down the court, ending up on the right-wing. He crossed over twice and bolted towards the baseline, gaining a step on his defender. Curbelo drew in the opposing center, before bouncing the ball behind his back perfectly to Jermaine Hamlin for a slam, capping Curbelo’s career-high nine assist night.

Curbelo jogged past the raucous Illini bench and couldn’t help but smile, carrying that underdog mentality with him.