Illinois to face Penn State in final game of season 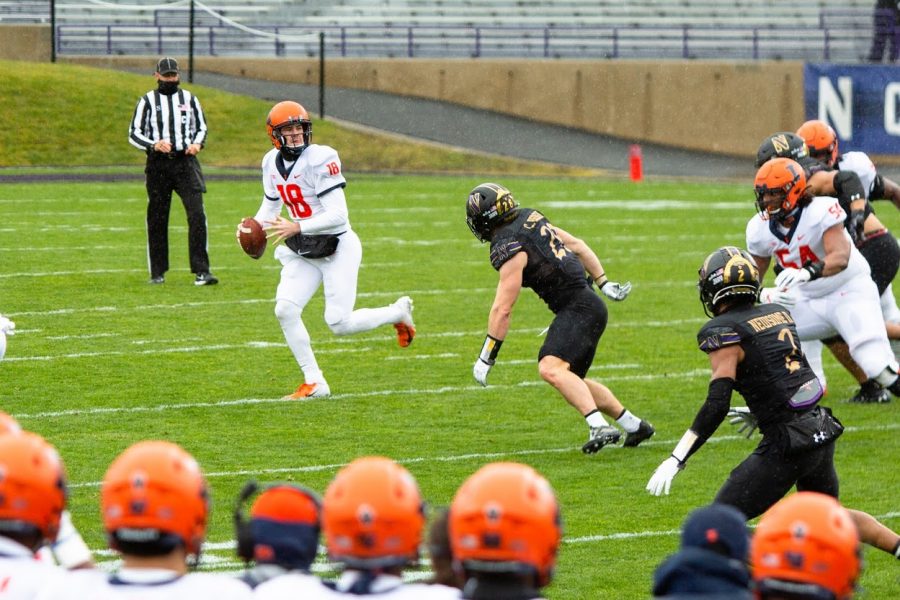 Quarterback Brandon Peters scans the field looking for receivers during the game against Northwestern on Saturday. Illinois will play Penn State this Saturday.

The Illini will play their final game of the season on Saturday when they travel to State College, Pennsylvania to take on Penn State.

Illinois and Penn State haven’t faced off since 2018 when the Nittany Lions came to Memorial Stadium and dominated late. The game was close through three quarters, but PSU put up 35 points in the fourth and won 63-24.

The Illini are coming off their second straight loss, a 28-10 defeat at Northwestern. The offense and defense both struggled all game and the whole team looked out of sync.

Penn State is coming off its third straight win, 39-24 over Michigan State. The Nittany Lions started the season 0-5, but have since found an identity on both sides of the ball and are looking like the team many people expected them to play like in 2020.

Offensive coordinator Rod Smith will serve as the interim head coach for Illinois this Saturday after the team announced it had parted way with previous head coach Lovie Smith earlier this week. This will be Rod’s first-ever game as a head coach.

“It is emotional, it’s a rollercoaster,” Rod said. “Sometimes you get a change of plans and you don’t want it, but at the same time, it happens. But our first and foremost job here is to these young men, these student-athletes that are here on this football team and at this university. And that’s to represent them and being able to support them, coach them and finish this thing out.”

Despite poor performances for the first five games of the year, the Penn State defense has been disrupting offenses over the past three weeks, allowing opponents to an average of just 16 points per game. Playmakers have stepped up and the whole defense looks confident.

This will present another challenge to a struggling Illini offense, which has only scored 17 points over the past six quarters of play. Illinois will also be without top receiver Josh Imatorbhebhe, who declared for the NFL draft on Thursday, leaving the offense shorthanded against another good defense.

Penn State’s offense has also seen the turnaround that its defense has made in the past three weeks. They’re averaging just under 30 points per game with improvements in their rush and pass game.

The Illini are also shorthanded again on defense, down at least seven starters from the time the season began. If Illinois wants any chance of hanging in this game, it’ll start with slowing down an improved Nittany Lion offense.

Unless something very strange happens, Illinois will not be making a bowl game this year and will end its season at Penn State this Saturday. Despite the firing of Lovie and no bowl game to qualify for, the Illini will still look to end their season strong with another road victory this weekend.

“A lot of emotions, a lot of just some mixed feelings going on,” Rod said. “Basically, you treat this as your bowl game is what you do … We’re going to try and attack it as hard as we can and prepare and let these guys go out and play and have fun.”