Despite offensive outburst, Illinois gets outworked by Rutgers in 91-88 loss 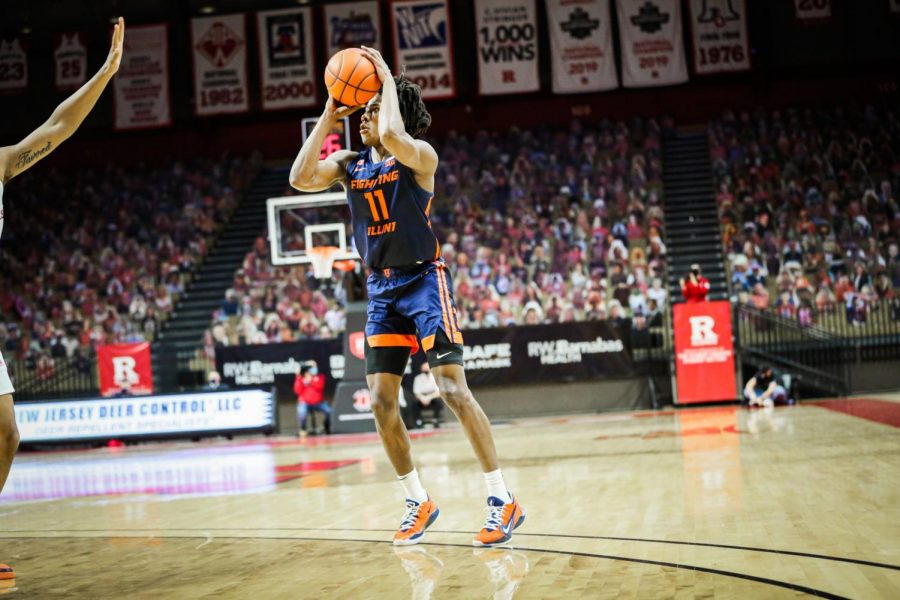 Ayo Dosunmu shoots a jumper in Illinois’ game at Rutgers on Sunday afternoon. The Illini fell 91-88.

In a normal season, a win at Rutgers is a meaningless benchmark for a team looking to cut down the nets in March. But, 2020 has been anything but ordinary and now a win at the RAC is telling of a team primed to make a run.

This is not a standard Rutgers team and the Scarlet Knights showed that on Sunday. After a strong first half, the Illinois defense went flat in the second half, as Rutgers gritted its way to a 91-88 victory over Illinois.

“Quite the learning lesson today,” Underwood said. “We got taken out behind the woodshed and whooped.”

In last year’s matchups, Illinois and Rutgers slowed down the tempo and played some low-scoring games. But in the first half, the offenses were on full display. Behind a Kofi Cockburn post hook, and threes from seniors Trent Frazier and Da’Monte Williams, Illinois jumped out to an 8-0 lead.

Every time in the first half that Rutgers got close, Illinois would score to pull ahead. They were getting contributions from all over the court. They finished the first half 16-31 from the field, scoring 1.139 points per possession. Frazier paced the Illini with 10 first-half points. Defensively, Illinois held Rutgers star Ron Harper Jr. to just six points on 2-7 shooting.

But in the second half, the script flipped. Rutgers shot a tad better, but its effort and intensity wore on the Illini. Rutgers used an offensive rebound spree to clean up misses and chip away at the lead. A Harper Jr. wing three gave Rutgers its first lead of the game at 49-47. Harper Jr. was the star of the second half, scoring at all three levels. After the quiet first half, Harper Jr. exploded for 22 second-half points to finish with 28 points on 9-15 shooting.

“He got a three right before the half…he got a clean three and that’s all it takes for a guy like that to get going,” Underwood said. “When you’re a veteran averaging 25 points per game, you just need a clean look at the rim. He got his confidence in the second half and he did what he does.”

“They punked us on the offensive glass in the second half,” Cockburn said. “It really helped them a lot because those are the shots that hurt teams. Those second shots after you guard for 30 seconds and….they get an offensive putback or three.”

The Scarlet Knights lead got up to 12 points on a pair of Jacob Young free throws. But Underwood’s squad would not stop fighting. Williams made two more threes down the stretch and the lead was down to six. Illinois got a stop then a tip-in from Ayo Dosunmu and they trailed 83-79 with 55 seconds remaining. But Rutgers made its free throws down the stretch and held on to win.

Scoring 88 points against a stout Rutgers defense, is a silver-lining from the loss. But giving up 91 points (53 in the second half) and 15 offensive rebounds is a long-term concern. Something Underwood knows they need to correct.

“It’s our crack downs and it’s a lack of physicality from the guards,” Underwood said. “Kofi’s done a good job of that for the most part but those guards gotta do their job. They gotta fight. They have to keep that big guy off the glass.”