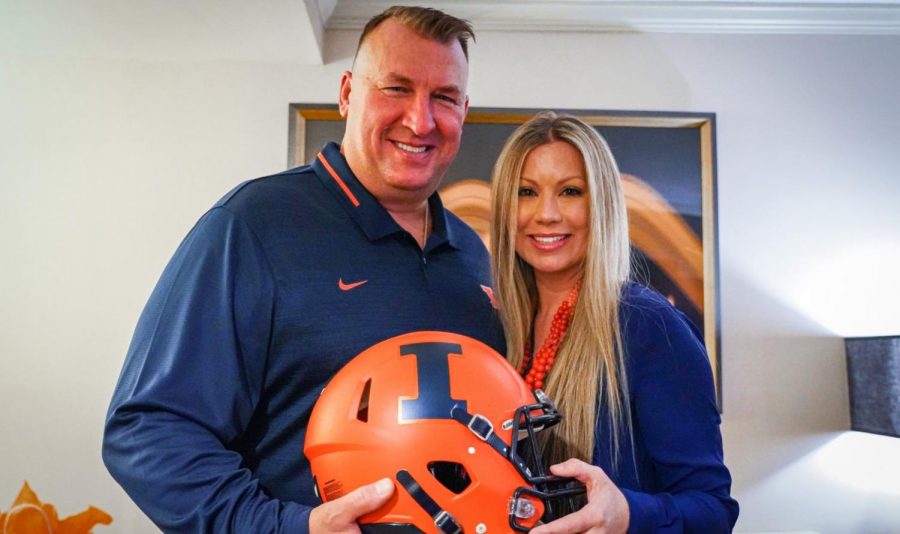 One of the biggest problems over the past half-decade in Illini football has been recruiting. Under Lovie Smith, the number of recruits from the state of Illinois has continued to decline, and this year’s class ranks last in the Big Ten. Despite recent disappointment, the hiring of new head coach Bret Bielema brings optimism for the future recruiting of the team.

Bielema was the head coach at Wisconsin for seven years, where he won three Big Ten championships and made a bowl game each season. After leaving Madison for the Arkansas head coaching job, he made three bowl games in five seasons.

It hasn’t just been Bielema’s coaching ability that has brought success to his programs, but the way he’s been able to recruit. Bielema wants players who fit the team well and can develop into the best they can be.

“We’ll build a roster of smart, tough, dependable players. They’re players that doesn’t have anything to do with their 40 (yard dash) time or their bench press, or maybe the way they catch the ball or throw the ball,” Bielema said. “But they will understand exactly what that means and how that plays into the offensive and defensive and special teams plans. The overall goal would be to build a roster that is a developmental roster… But they have to be players that fit the University of Illinois.”

One way Bielema plans to effectively recruit players for the Illini is through the state of Illinois. In the past five seasons under Lovie Smith, in-state recruiting had rapidly declined.

This year only three of Illinois’ 14 football commits are from in-state. Six are from Florida. Getting the best players possible is important, but Illinois has produced Big Ten talent over the past five years that have chosen to go elsewhere.

Losing impressive in-state talent to Iowa, Northwestern, Michigan State, Purdue and other Big Ten schools has become popular in recent years, and Bielema is looking to instantly change that narrative. He preached it at Wisconsin and Arkansas and plans to make recruiting in-state guys a top priority for the Illini.

“Any place I’ve ever had success is built on the people that are around it,” Bielema said. “Illinois high school football players, also Illinois high school coaches, anybody that can help this program build its foundation of a roster than can make that happen is needed.”

Not even a full day after getting hired, Bielema contacted the Illinois High School Football Coaches Association and immediately began making relationships with high school football coaches in Illinois, something Lovie Smith didn’t make a priority.

One characteristic Bielema has to his advantage in recruiting players from Illinois is that he is from the state and has knowledge of where players are coming from. Bielema grew up in Prophetstown, Illinois, as an Illini fan.

Having been a head coach in the Big Ten for seven years and recruiting several talented players from Illinois, Bielema knows where to go and how to get guys for his teams, and that includes all parts of Illinois. From his opening press conference alone, Bielema seems to have a strong understanding that everywhere in the state can produce players whom he would want on his team.

“I don’t care what size the school, I don’t care if it’s public or private, north-south, east-west, in the middle of the state, they will have contact with my staff,” Bielema said. “We’ll have a general contact as well that anybody that believes they have a player that can help Illinois win a state championship, or a national championship, a Big Ten championship, we want them in our program.”

Even after impressive recruiting classes, Bielema knows he has to make adjustments from previous strategies.

Bielema made 10 bowl games in 12 seasons as a head coach. His first missed appearance was his first season with Arkansas, with guys he didn’t recruit, and his second miss was in his fifth and final year at Arkansas when he got fired following the final game of the season.

Arkansas has won only seven games over three seasons since Bielema was fired, and whether the firing was fair or not, Bielema knows he could have done better. Part of the reason his final team at Arkansas wasn’t successful is that around half a dozen players left early for the NFL, and Bielema blames himself for not recruiting a deeper team.

“Five or six of those guys (who left early) were early entrants (to the NFL draft), guys that I just didn’t foresee (leaving), ” Bielema said immediately after being fired from Arkansas. “I knew we were recruiting good players… I wish I would’ve signed more (players) of the quality that you need here.”

A challenge Bielema will face before beginning practice for 2021 will be recruiting-based, and not for high schoolers, but players who are already on the team.

Transferring schools when a coaching change is made is common, but this is also a year when seniors have the option to come back and play another year due to the pandemic affecting the season. Bielema understands how important it will be to retain current players and has made forming relationships with them his first priority.

“Yesterday, a very rewarding day, to get a chance to finally meet our team,” Bielema said on Monday. “I wanted (the players) to know that team meeting was between me and them and the information we shared was real. I also group the meeting up afterward into subgroups with the leadership council and a group of seniors and a handful of other players that… could move on from the program and asked them some questions but let them speak to me.”

With his experience as a head coach, recruiting success and future recruiting plans, Bielema seems like a perfect fit for the Illini. Illinois fans should expect positive changes which will feed into Bielema’s idea of making the Illini as competitive as they have been.

“It’s always an indication in this region, but specifically here at the University of Illinois, when you’re doing things right and get it going in the right direction, this place can be as competitive as anybody in the country,” Bielema said.