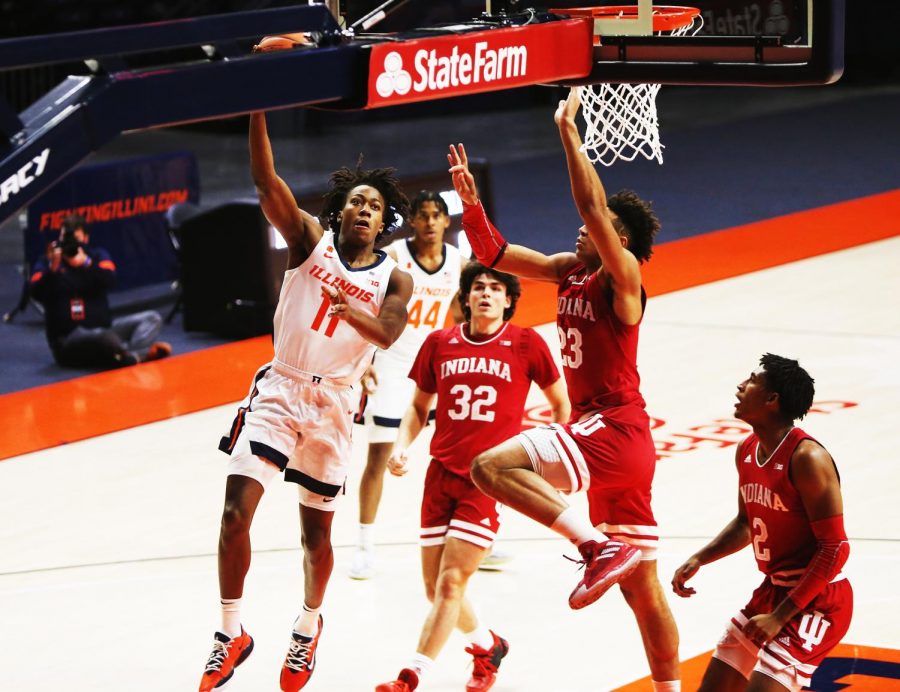 Ayo Dosunmu goes up for a layup in Illinois’ contest against Indiana at State Farm Center on Saturday. Behind Dosunmu’s performance, the Illini won X-X.

53 seconds. 53 seconds is all it took for a slumbering Illinois offense to wake up. Trailing 49-44, the Illini got two points on a slicing drive from Ayo Dosunmu. Kofi Cockburn followed that up with a layup, and a blocked shot.

Andre Curbelo snagged the shot, dribbled up the court and found Dosunmu on the wing for a three. He drained it and Illinois took a two-point lead. They would not look back from, going on to beat Indiana 69-60.

“Coach Underwood told me to be the best player in the country. Finish the game off,” Dosunmu said. “I just accepted his challenge and made the shots that I work on in the gym everyday.”

The first half was a defensive battle. Illinois’ fifth-ranked offense struggled to score on Indiana’s 11th-ranked defense. But the Hoosier offense wasn’t much better. The teams started a combined 2-14 from the field, as the Hoosiers jumped out to a 5-1 lead.

Indiana led 23-18 at one point, but Illinois clawed back. A Dosunmu transition bucket followed by a pull-up jumper cut it to one. Then Kofi Cockburn followed up a Trent Frazier missed jumper and Illinois took its first lead of the game 24-23.

The usually-dominant big men Cockburn and Trayce Jackson-Davis were limiting each other on offense. Cockburn’s sheer size prohibited Jackson-Davis from powering through him, while Jackson-Davis’ quick-twitch leaping ability prevented Cockburn from finishing inside. At the half, Jackson-Davis had eight points on 2-8 shooting while Cockburn had five points on 2-5 shooting.

Cockburn kept the defensive pressure on Jackson-Davis in the second-half. He made just one more field goal, finishing with a season-low 11 points on 3-13 shooting. Cockburn and Giorgi Bezhanishvili’s defense and the team’s scouting report made it hard on Indiana’s star lefty to score.

“We focused in and locked in and made sure I don’t give him any easy shots,” Cockburn said. “When he makes a move, just being there, walling up, making him shoot over me.”

Illinois extended its lead to as much as nine in the second half on Dosunmu’s third three in two minutes. But Indiana wouldn’t quit. An Armaan Franklin three and Al Durham jumper helped narrow the gap to just three points. It just wouldn’t be enough. Dosunmu had one more dagger three in him that ultimately put the Hoosiers away. He jogged back on defense, arms extended and fingers making the “three” symbol, capping his third 30-point game of the season.

“(With) really good players, it doesn’t matter what goes on the first 28 to 30 minutes of the game,” Brad Underwood said. “When the game is on the line, guys make plays and make shots. I’ve said it many times, Ayo is the best guard in the country and he proved that again today.”

The win pushes Illinois to 2-1 in the Big Ten and a tie for fifth place with Purdue. Illinois will have a chance to break that tie next Saturday at State Farm Center against the Boilermakers.