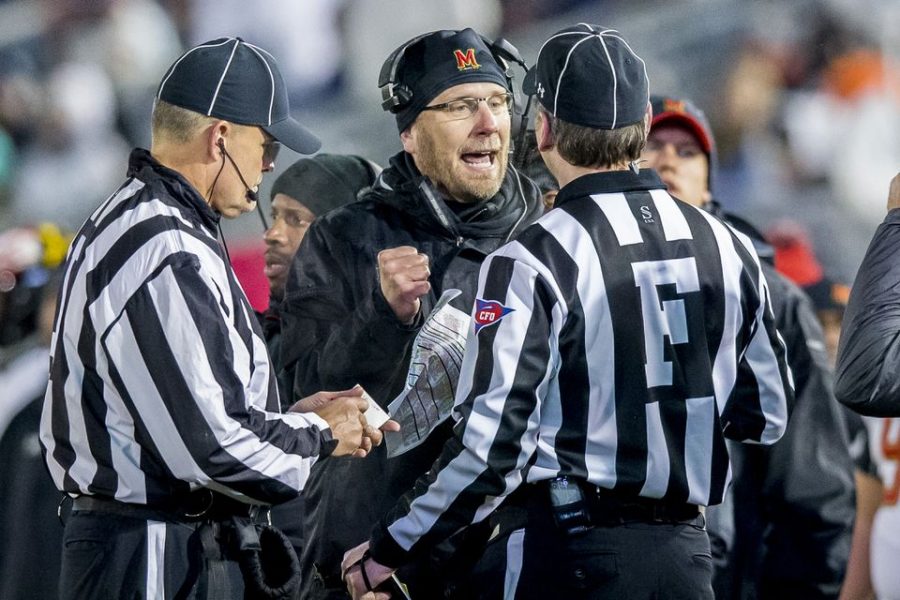 Maryland head coach Matt Canada questions a call during a game against Penn State on Nov. 24, 2018. Canada now coaches for the Pittsburgh Steelers and is a potential choice for offensive coordinator at Illinois.

Bret Bielema is preparing his first staff with the Illini, and major changes are expected with the current staff given Bielema’s past.

Considering Bielema’s history with the pro-style offense, the former Arkansas head coach wants to sprinkle in new dimensions he’s learned from the SEC and NFL, which probably means a more spread attack. As for defense, Bielema wants to transition away from his usual 4-3 defense and install a 3-4 defense.

Along with his $4 million annual salary, athletic director Josh Whitman granted Bielema a larger salary pool for his assistant coaches compared to Lovie Smith. While it may be tempting to cater to the current roster, Bielema will build a staff for long term success instead of short term.

If Bielema wants to keep huge offensive linemen and a stout running game on his agenda while staying innovative, Canada is the man for the job.

One of the most respected coordinators in the nation, Canada has produced some high-powered offenses throughout the ACC, Big Ten and SEC. The Indiana graduate is well-known for his pro-style attack that heavily utilizes misdirection and motions.

After coordinating in the Midwest for over a decade, Canada moved to North Carolina State and developed Jacoby Brissett into an NFL prospect and averaged over 30 points per game down in Raleigh.

But Canada’s highlight in his career was in 2016, coordinating the Pittsburgh Panthers. With Nathan Peterman as his quarterback, the Panthers averaged 41 points per game and knocked off eventual national champions Clemson by scoring 43 points.

Canada’s career has been up-and-down since. His tenure at LSU ended after a season, but Canada did restore his image when he almost led Maryland to a bowl game as the interim head coach.

He will focus on a strong running game while developing Isaiah Williams as a passer while probably avoiding the complete spread offense. While it’s not ideal for Williams, Bielema isn’t building a program for one player.

Canada has shown he is able to work in any conference, and his knowledge of Big Ten football will help Bielema with recruiting.

Canada previously worked for Bielema at Wisconsin in 2012, and while it was reported the two had a brief power struggle, they worked out their struggles and clinched a Big Ten championship in a 70-31 victory over Nebraska.

With the pro-style offense slowly disappearing, spread offenses are becoming the new normal. However, even in the shotgun, a spread offense can still use big offensive linemen and run the ball at will; look at Ohio State.

Kevin Johns has deep Big Ten roots, having coached under Randy Walker at Northwestern and was the offensive coordinator at Indiana when they started making bowl games. His offenses at Indiana kept up with Ohio State in terms of points per game.

Johns has employed a spread attack, and he developed Nate Sudfield into an NFL quarterback, while he also found great success with Tre Roberson, a dual-threat quarterback similar to Isaiah Williams.

However, despite a lot of passing, Johns never abandoned the run game; he coordinator the Hoosiers the year Tevin Coleman ran for over 2,000 yards.

Currently at Memphis, Johns helped lead the Tigers to a Cotton Bowl appearance in 2019, falling to Penn State 53-39. Johns would probably take a good look at a Power Five job with Illinois.

Jake Moreland has coordinated Western Michigan for the past four seasons, and the Broncos’ offensive firepower has stayed since P.J. Fleck’s departure.

The Broncos averaged over 40 points a game this season and have never fallen below 30 since he’s been there. Along with a steady running game — around 200 yards per game — the quarterback play has been fantastic.

Kaleb Eleby has thrown for 18 touchdowns and only two interceptions while adding four rushing touchdowns in six games. Before that, Moreland coached a pro-style quarterback in Jon Wassink, so Moreland has experience with multiple types of quarterbacks.

In 2017, when Bielema wanted to transition to coaching a 3-4 defense at Arkansas, he turned to Rhoads for assistance. Rhoads ran a 3-4 defense at Iowa State, where he was able to make three bowl games in his time as a Cyclone. Rhoads has been to 10 bowl games overall, including coordinator stints at Pitt and Auburn.

Rhoads has ties to Bielema, has coached winning defenses and knows the 3-4 philosophy as well as anyone in the game. Despite some poor seasons and an awful 2020 with Arizona, if handed players with potential, Rhoads has proven he knows how to coach a strong defense and could finally bring some excitement to an Illini defense that was never successful under Lovie Smith.

He may not be the most qualified person for the job, but current Illinois defensive tackles coach Al Davis could be considered by Bielema for DC, and at the very minimum, should be a guy he keeps on his staff.

Davis successfully coached tackles at Illinois in his first year on the staff in a defensive line that wasn’t expected to make any noise whatsoever. If Bielema does want to work with a 3-4 defense, it will be smart to keep a guy that knows the current tackles and can transition them from Smith to Bielema’s style of defense. Davis also has the ties to Bielema, as he was hired as a defensive graduate assistant at Arkansas from 2014-16 after he played at Arkansas. The two know each other, and despite a short resume, Davis was solid in his first year with the Illini.

Who Bielema should keep

The run game for Illinois was the main offensive attack in both Illinois wins, especially against Rutgers, when Chase Brown, Mike Epstein and quarterback Isaiah Williams combined for 341 rushing yards. The improvements seen out of Chase Brown have been impressive, who has praised Bellamy multiple times through social media and during pressers. Bellamy has also worked with Williams while coaching the run game, and with Williams seemingly locked in for another year with the Illini, and a deep running back group, Bellamy will have a lot to work with in 2021.

Bellamy has proven he can get the most out of who he coaches, and if Bielema plans on going to a more spread outlook with Illinois, it’ll be important to keep Bellamy when transitioning to a more open ground attack.

Bielema also must look to retain tight ends coach Cory Patterson, who has been crucial in recruiting some key players for Illinois.

Patterson is very close to and helped recruit quarterback Isaiah Williams, who will likely be the starter for Illinois next season. He also has his ties down in the St. Louis region, an area Illinois needs to land recruits from considering the talent the area holds with powerhouse East St. Louis High School. Patterson was brought in by Lovie Smith in 2018 and has only shown improvements in his coaching abilities.

Recruiting has been a major issue for Illinois under Lovie Smith, and Patterson is responsible for one of the highest recruits the program has hit on in recent years. Patterson has good connections with his players and the St. Louis area and is someone Bielema needs to keep if he wants to improve team recruiting and ensure some current Illini stay with the team for 2021 and beyond.

Cuts that needed to be made

Offensive coordinator Rod Smith, along with strength coach Lou Hernandez, have both already been let go by the Illini, two more spots Bielema will be looking to fill for next season.

Smith showed promise at times during his time at Illinois, especially in the second half in an unforgettable win over Michigan State in 2019, but he never got the most out of his talent in 2020. The season was plagued with COVID-19, but the expectations for Illinois’ offense this year were very high and didn’t produce to the level they should have. The success in the run game has been mostly credited to Bellamy, and despite memorable games, it was time for Illinois to move on from Smith.

Hernandez is also someone that many aren’t surprised will not be with the team next year. The Illini were plagued with injuries in 2020 all season and on both sides of the ball, which oftentimes falls on the strength coach. Ben Herbert, the Michigan director of strength and conditioning, could be Hernandez’s replacement. Herbert was Bielema’s strength coach at Wisconsin and Arkansas and coached many great players. 76 draft picks and 10 first-rounders highlight the players Herbert coached and would be an improvement from Hernandez under Bielema in 2021 and moving forward.

Fans are very fond of Nathan Scheelhaase, who had to deal with the Ron Zook fallout and the Tim Beckham era as the quarterback. Now 30 years old, Scheelhaase is an up-and-coming wide receivers coach under Matt Campbell at Iowa State.

Scheelhaase has already been an assistant at his alma mater, but he parted ways with Lovie Smith and headed over to Ames, Iowa. Scheelhaase is obviously a rising star, and Bielema should take a look at adding him to the offensive staff.

However, it’s unclear whether Scheelhaase is ready to become an offensive coordinator, and unless he gets that coveted position, why would he want to leave Matt Campbell, who turned Iowa State into a top Big 12 program? For all we know, Campbell could be the next head coach at USC or Michigan in a few years, and Scheelhaase could be on his way with him.