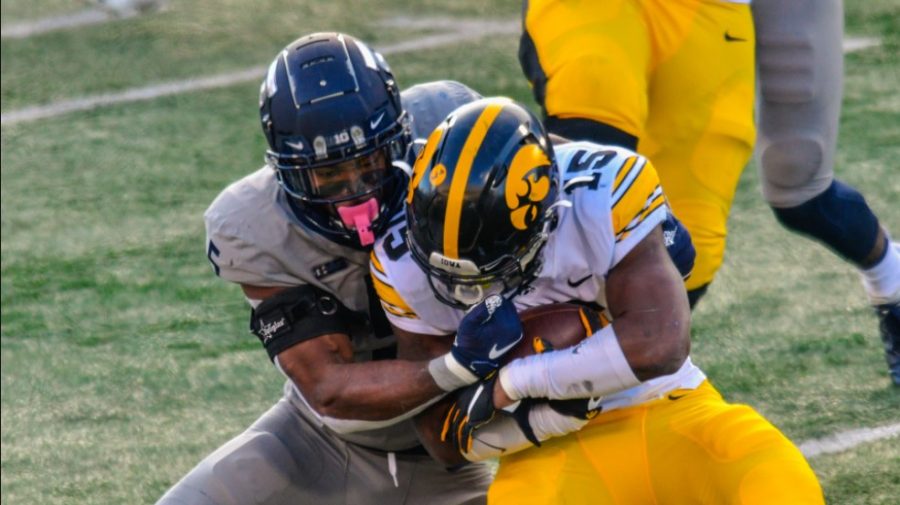 Senior Milo Eifler wraps up an Iowa ball carrier during competition. Eifler is leaving the Illinois football team to pursue opportunities in the NFL.

The Illinois football team is adding another man to the list of players who will pursue their NFL dreams in the early months of 2021. Linebacker Milo Eifler joined offensive lineman Kendrick Green, linebacker Jake Hansen and wide receiver Josh Imatorbhebhe in declaring for the 2021 NFL draft.

“And now it’s time for me to take the next step in my journey,” Eifler wrote in his statement on Twitter. “It is with great humility and gratitude that I announce I will be declaring for the 2021 NFL draft. All glory to God.”

Eifler played two seasons for Illinois after transferring from Washington following the 2017 season. Eifler, known for his big hits and physical play, had an instant impact for the Illinois defense in his first season after sitting out per NCAA transfer rules.

Eifler jumped right in the ring, as he started his first game in the orange and blue against Akron in 2019. The game was memorable to most Illinois fans as Eifler made a few big highlight hits in his first start on Lovie Smith’s defense. The experience Eifler gained from that game wasn’t measured by those hits, it was measured by his relationship with Lovie Smith.

“We can go all the way back to the Akron game. The play right before I hit the dude, I had a personal foul. A lot of people don’t even remember that,” Eifler said in his Zoom press conference on Wednesday. “(Coach Smith) was really mad, he was yelling at me and I was like, ‘man, I pissed Coach Smith off, what’s it going to look like this year?’ … He just kind of sat me down and talked to me as if I was his son almost. Whenever you have that confidence, it builds. So, after that it’s like he really cares about me.”

The trust Smith instilled in Eifler brought motivation to Eifler and helped him become one of the most consistent parts of the Illinois defense. He played in all 13 games for Illinois in 2019 and played six of eight in 2020 due to injury. That play resulted in 90 total tackles, three sacks and a fumble recovery while playing at the linebacker position.

Eifler, like most of the team, struggled at times in 2020. Devastating injuries on the defensive side of the ball and the COVID-19 season added to a lack of consistency.

Eifler’s decision to declare for the draft is a new one, as he was fully committed to the 2020 season. But after the Penn State game at the end of the season, Eifler realized it was his time to move on from the program.

Eifler has signed with Elite Athlete Management, who represents NFL players like Odell Beckham Jr., and will move to Scottsdale, Arizona next week and train at EXOS sports facility.

While the next few months might be challenging for Eifler, he won’t be doing it alone. He will have help from his friends with NFL experience, including his former Washington teammate and Arizona Cardinals cornerback Byron Murphy and fellow Bay Area native and Green Bay Packers cornerback Kevin King.