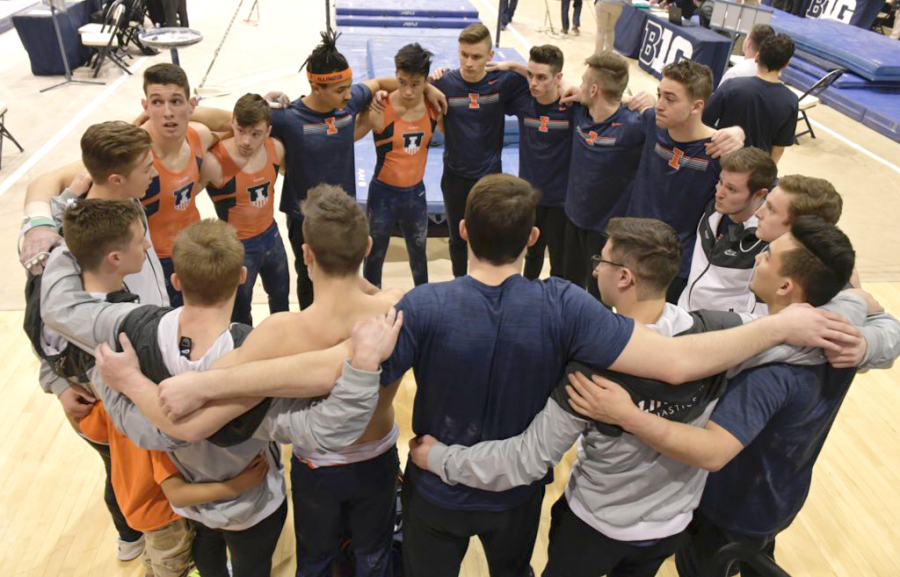 Members of the Illinois men’s gymnastics team lock arms in a circle at a gymnastics meet during the 2019 season..

After several months of delay, the Illinois men’s gymnastics team has released a schedule for its 2021 season.

Under normal circumstances, the schedule for the upcoming season would’ve been released in the fall. But because of the uncertainty that came with the COVID-19 pandemic, namely whether collegiate sports could be held safely, the schedule was not released until Jan 4. Regardless, it’s a welcome sight for the team, which hasn’t competed since March 7.

“I know I can speak for my staff and my team when I say we’re very excited to see our official schedule come out,” said head coach Justin Spring per fightingillini.com. “Preseason training has been consistent for us, and we’re ready to get our 2021 season underway.”

Illinois is currently scheduled to compete in six dual meets, all against Big Ten teams, with alternating home-away locations. All meet dates are listed as “weekend of,” with exact dates to be determined later.

Illinois will begin its season the weekend of Jan. 22 in Huff Hall against Ohio State, the only Big Ten team it didn’t face in 2020, before traveling to Penn State the following weekend. Illinois will return to Huff Hall the weekend of Feb. 5 to face Michigan before traveling to Iowa the following weekend. Because of COVID-related financial difficulties, Iowa’s team will be disbanded after the season ends, making for a bittersweet match between the longtime Big Ten opponents.

After four consecutive weekends of competition, Illinois currently has a three-week break after Iowa, but Spring hopes to schedule virtual non-conference meets during this period. Illinois will resume Big Ten competition the weekend of Mar. 12 by hosting Nebraska and wrap up the regular season in Minnesota the following weekend. Minnesota’s team, another longtime Big Ten opponent of Illinois, will also be disbanded at the end of the season, despite fierce efforts from the collegiate gymnastics community to save the team. Illinois will finish its 2021 season at the Big Ten Championships on April 3-4 (location yet to be determined) and at the NCAA Championships on April 16-17 in Minneapolis.

Because of the pandemic, no fans will be allowed to attend Illinois home meets this season in accordance with the State of Illinois’ restrictions.