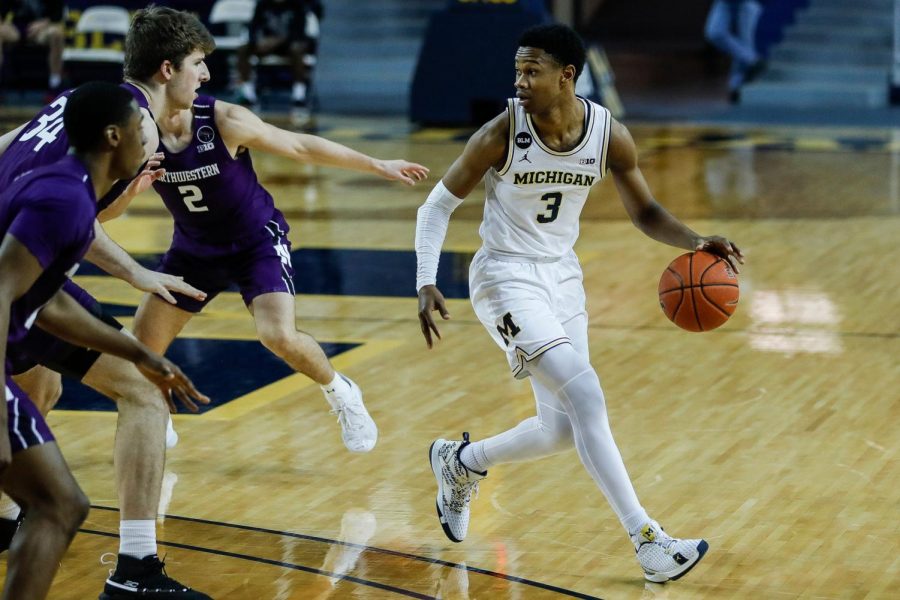 Michigan guard Zeb Jackson advances against Northwestern defenders during the second half of their game on Sunday.

We all knew this year’s Big Ten teams would create one of the most exciting, unpredictable seasons in conference history. And after three weeks, unpredictable might be an understatement, as we continue to see, week in and week out, that any team is capable of beating (or losing to) any other team on a given night. With only two Big Ten teams currently below .500 overall, let’s take a look at some of the most prominent talking points three weeks into the season.

Few people could have predicted Northwestern, a program that finished with just three conference wins last season, would equal that total after just three games, all of which they entered as underdogs, and eventually earn a spot in the Associated Press Top-25 poll. Consistent performances from juniors Miller Kopp (14.4 points per game) and Pete Nance (11.7 points, 6.1 rebounds per game) and sophomore Boo Buie (11.4 points, 5.4 assists per game) helped guide the Wildcats to a 3-0 conference start, the program’s best start to Big Ten play since the 1967-68 season.

Despite currently being on a two-game skid following road losses to Big Ten powerhouses Iowa and Michigan, Northwestern looks like a true dark horse in the Big Ten. A tough upcoming schedule (vs. No. 12 Illinois, at Ohio State, vs. No. 5 Iowa) could potentially see the Wildcats slip down the standings, but after upsetting then-No. 4 Michigan State (more on that later) and then-No. 23 Ohio State, you can never rule on the veteran Northwestern squad.

Though Northwestern is off to an unexpectedly hot start, Michigan State doesn’t look anything like the team that climbed as high as No. 4 in the AP poll a mere three weeks ago.

After defeating the then-No. 6 Duke Blue Devils at Cameron Indoor Arena on Dec. 1, the Spartans appeared to be one of the teams to beat in the Big Ten. One month later and the East Lansing squad is 1-3 in Big Ten play, finally picking up its first conference win against Nebraska on Saturday.

The Spartans have had an unfavorable schedule so far. But this is Michigan State, a Big Ten perennial powerhouse. There is no excuse for losing by 14 points at Northwestern or getting outplayed by Minnesota from the opening whistle and eventually falling by 25, games in which the Spartans won by a combined 23 points last season. Everyone knew Cassius Winston and Xaver Tillman would be big losses, but a 1-3 start is inexcusable for a program as dominant as Michigan State.

After such a crazy start to the season, how can you pick just one upset?

Northwestern, a team that lost its two games to Michigan State last year by a combined 34 points, stunned the nation with a dominant 79-65 win in Evanston. A career-high 30-point performance from Buie and a double-double from Nance (15 points and 12 rebounds) helped the Wildcats shock the Spartans and the entire college basketball world. The win was also Northwestern’s first win over Michigan State since 2012 and its first win over a top-five team since 1979.

Minnesota entered its showdown with Iowa off a brutal 92-65 loss at the hands of Illinois in Champaign. Meanwhile, Iowa was coming off a 15-point win over Purdue, a team they lost to twice last season.

Despite 32 points from last season’s Big Ten Player of the Year, Luka Garza, and 23 points from sophomore CJ Fredrick, Minnesota triumphed in overtime, 102-95, thanks to 30 points from star Marcus Carr and 26 off the bench from senior transfer Brandon Johnson, who also tied the school record for three-pointers made in a game with eight.

Finally, Maryland looks like a completely different squad from the team they had last season after losing stars Anthony Cowan Jr. and Jalen Smith. Wisconsin, on the other hand, brought back a near-identical roster from last season’s Big Ten regular-season co-champion squad.

17 points from guard Eric Ayala, along with 15 from Aaron Wiggins, helped the Terrapins pull off the upset on the road against the then-No. 6 Badgers. The loss also snapped Wisconsin’s 15-game home winning streak.

With as many as nine teams in last week’s AP poll, the Big Ten is among the most competitive conferences in the country; Northwestern, who fell out of the rankings in this week’s poll, and Minnesota both entered the top 25 for the first time since 2017.  It’s also important to note that 12 Big Ten teams are in the top-50 in the KenPom ratings, with only Northwestern (No. 56) and Nebraska (No. 117) missing out. The number of ranked Big Ten teams will likely decrease as the season progresses (the number has already been reduced to seven following the release of this week’s poll) since all teams are bound to lose a few games against ranked (and potentially unranked) conference opponents this season.

Having so many ranked teams should certainly be something the Big Ten can be proud of, and fans should expect a majority of these teams to get a spot in the NCAA Tournament come March. But it will still be interesting to see how these Big Ten teams fare in the postseason against high-quality competition from other Power-5 conferences and other top teams from around the country, especially with Gonzaga looming as the team to beat this season.

The Big Ten also boasts some of the best players in the country, with several names already being thrown around in the National Player of the Year conversation.

Garza, last year’s Big Ten Player of the Year, Naismith Kareem Abdul-Jabbar Center of the Year and Consensus First-Team All-American, is already off to an incredible start to the season, averaging 27.5 points, 9.1 rebounds and two blocks per game. The senior center is probably the Player of the Year frontrunner, both in the Big Ten and in all of college basketball, which should be a no-brainer since his season-low in scoring so far this season is 16 points. Yes, you heard that right. 16 points was his worst performance. He’s a beast.

Illini guard Ayo Dosunmu is also in the running for Player of the Year, as he is averaging 23 points, seven rebounds and five assists per game. Though he has struggled a bit with turnovers as of late, the Chicago native continues to provide a spark to the Illinois offense any time he’s on the court, especially in crunch-time situations. If he can reduce his blips in concentration and continue to score, Dosunmu will remain one of the best players in the Big Ten and in the country.

After making the All-Big Ten Freshman Team last season, Indiana sophomore Trayce Jackson-Davis has proved why he’s one of the most dangerous players in the country. Through 11 games this year, the Greenwood, Indiana, native is averaging 20.3 points, 8.9 rebounds and 1.7 blocks, and he already has three double-doubles this season. If he can keep putting together efficient performances and reduce his turnovers, Jackson-Davis will be in the conversation for Big Ten Player of the Year.

Rutgers’ Ron Harper Jr. and Minnesota’s Marcus Carr have also been off to hot starts, but they will need to continue to dominate if they want to gain more national attention. Harper Jr. is averaging 23.5 points, seven rebounds and 2.1 assists per game and is one of the biggest reasons why Rutgers is off to such a hot start, while Carr (22.1 points, 4.1 rebounds and 5.9 assists) has led Minnesota to a 10-2 start.

Where we stand after three weeks (as of Jan. 4)