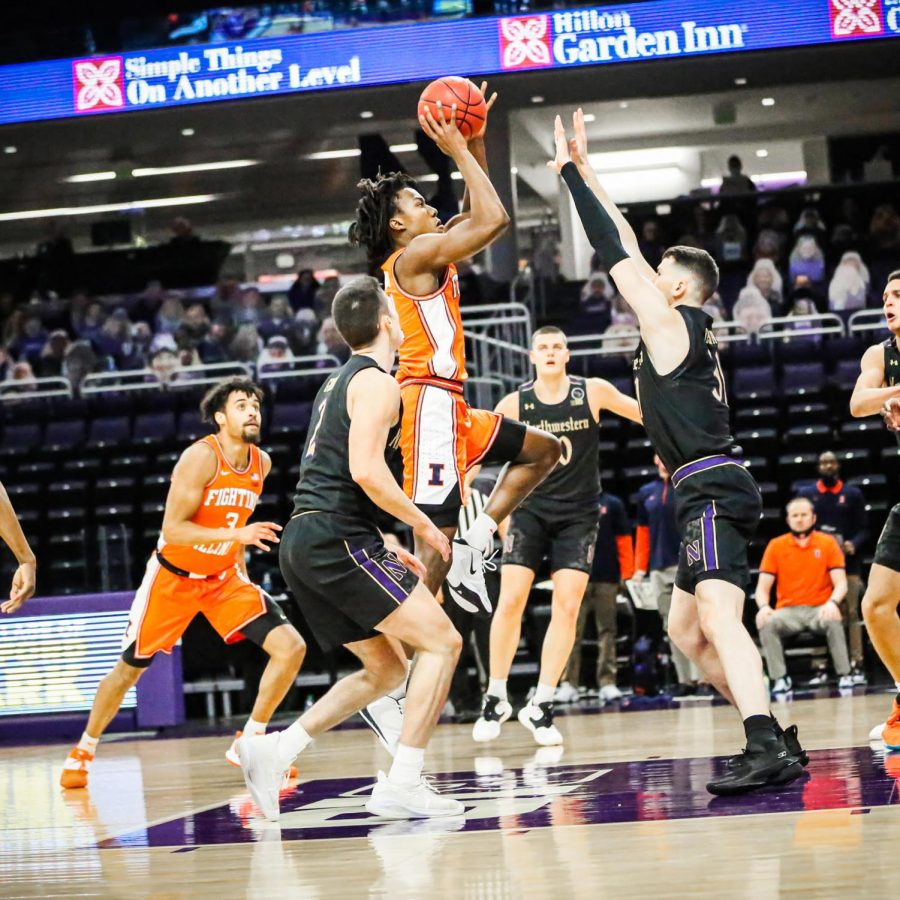 Ayo Dosunmu shoots a jumper in Illinois’ game against Northwestern on Thursday night. The Illini won 81-56.

EVANSTON — In the first 20 minutes of Thursday night’s contest against Northwestern, Brad Underwood’s emotions were visible. As his 12th ranked team struggled to make shots and defend, he tore into them, imploring them to play better.

But when his team took to the locker room at the conclusion of the first half, it wasn’t Underwood who delivered the big pump-up speech to his group. He’d done enough yelling. Rather, the veterans of Illinois rallied the team. With multiple voices chiming in, the group gathered themselves. They then proceeded to play their best half of the season, outscouring the Wildcats by 40 points to defeat Northwestern 81-56.

“That’s the leadership you want as a coach that you know you don’t have to go do that,” Underwood said.

After some slow starts in the past few games, Illinois came out with a ton of energy early, leading 12-6 at the under eight-minute media timeout. But Northwestern head coach Chris Collins switched to a zone defense, and suddenly everything changed. After a 5-9 start from the field, Illinois struggled to get clean looks. When they did, shots didn’t fall. The Illini made just three of their last 14 shots off the half. Star guard Ayo Dosunmu picked up his second foul of the half with 9:21 remaining and played sparingly.

Northwestern used those stops to string together consecutive scores. Their five-out offense caused trouble for Kofi Cockburn. Northwestern bigs Pete Nance, Robbie Berans and Ryan Young all splashed home a shot from deep in the first stanza. They combined for 20 first-half points. The Wildcats used a 12-1 run to end the half up 43-28.

The players chat amongst each other paid dividends, as the Illini started the second half on fire. On the first defensive possession, Da’Monte Williams drew a charge on Wildcats guard Boo Buie, his third of the contest. That was followed by a Frazier three before a Cockburn and-one on the ensuing possession cut the lead to nine. Dosunmu followed with a layup and the Illini had an 8-0 run to start the half.

The 8-0 run was just the start. From there, Illinois used a collection of defensive stops, ball-movement and rebounds to punish Northwestern. Cockburn awoke from his first-half slumber, scoring 18 points and grabbing 12 rebounds in the second half. Cockburn’s spurt combined with improved team-rebounding propelled Illinois to a 30-5 run to start the half.

“I’ve never been a part of anything like that,” Cockburn said. “I was in awe, man, just being on the floor watching that happen and being a part of it. It was a really good feeling.”

“The difference was defense,” Cockburn said. “We’re a really good defensive team and when we talk and communicate we are active and we help each other out… We had a different defensive presence than we had in the first half and we just came out and dominated.”

With that run, Illinois became the only Division I team in the past 25 years to trail by 15 or more points in a half and win by at least 20 points. The win marks Illinois’ fourth straight this season, and their fifth straight against Northwestern.