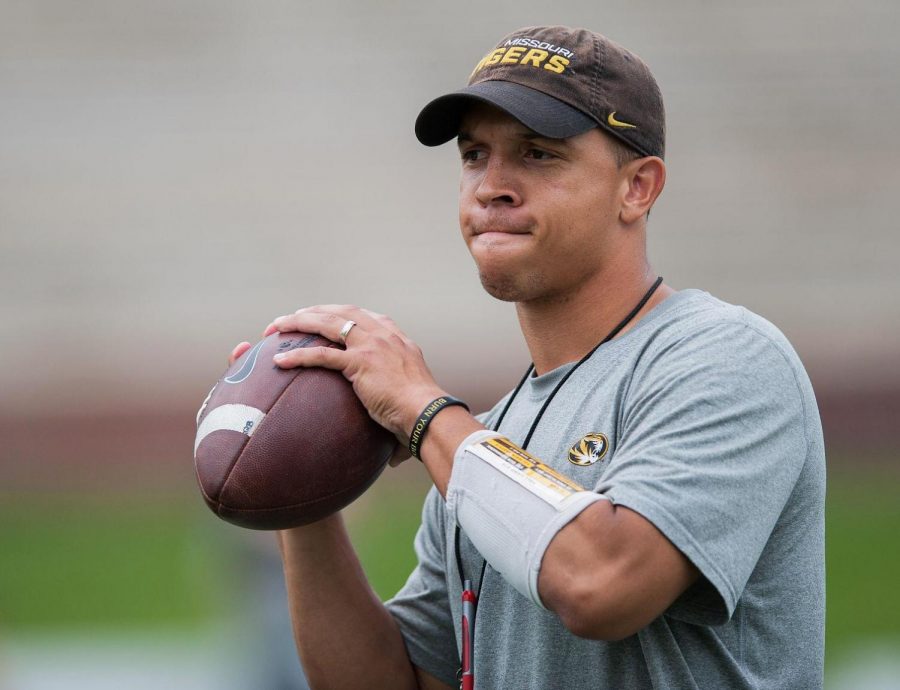 Ryan Walters prepares to throw a football. Walters will be joining the Illinois football team as Defensive Coordinator

Ryan Walters’ father played collegiate football at Colorado as a quarterback. So when he started playing football, being the signal caller seemed like a perfect fit.

Like his father, Walters chose the University of Colorado, intending to be a quarterback under head coach Gary Barnett, who was his father’s offensive coordinator a decade and a half earlier.

The problem: current Fox analyst Joel Klatt wasn’t going anywhere. Walters knew if he wanted to play quarterback, he would have to sit and wait for years.

Quarterback was the only position he knew. But in his mind, he’s a football player. He didn’t need the spotlight of being a Big 12 quarterback to put on the pads. Walters had a meeting with Barnett and requested to switch sides and join the defense as a safety.

“We didn’t bring you here to backpedal (as a safety),” Barnett told him. “We only took one quarterback from your (recruiting) class.”

But Walters didn’t back down, and Barnett gave in, allowing his handpicked quarterback to try out defense. The results: three years of starting at safety and being named the team’s MVP his senior season, which paved the way for a career as a defensive coach.

Walters is only 34 years old, but the Colorado alum has already worked under great defensive minds while taking command of his own defense for around half a decade.

From an outside perspective, leaving Missouri seems odd. The Tigers just exceeded expectations this season, going 5-5 amidst an All-SEC schedule. Walters has had almost complete control over the Tiger defense for five seasons, which was top-notch in 2019 before slipping in 2020.

But Walters, who says he has “goals and aspirations” as a football coach, viewed Bielema’s offer — a probable raise and the chance to craft his own defense — to come up to Champaign with him too good to pass up.

Walters is a student of the game, something he demands from all of his players. When discussing the job with the defensive-minded Bielema, he viewed it as a chance to grow as a coordinator.

Before becoming the head coach of Wisconsin, Bielema was the Badgers’ defensive coordinator for two seasons. His Badger defenses were known as tough 4-3 defenses that produced stars such as JJ Watt and Chris Borland.

While Bielema struggled to recreate that magic in Fayetteville, Arkansas, Bielema was able to recreate himself while learning under Patriots head coach Bill Belicheck, which caught Walters’ eye.

“(Belichick) is the GOAT,” Walters said.

However, Bielema and Walters are preparing for a completely different animal as they try to rebuild an Illini defense that has been getting torn apart for years.

In Lovie Smith’s five seasons, the defense allowed over 30 points per game in four of them. The fact that the Illini forced so many turnovers was positive; however, Lovie Smith never won a single game in Champaign without his defense forcing a turnover.

However, the Tigers reverted back to below-average play in 2020, with the defense allowing 32 points a contest. However, Walters chalks that up to external factors caused by COVID, such as players opting out for the season.

“When starters went out, we weren’t playing with backups,” Walters said. “We were playing freshman offensive lineman at noseguard. Still, I was very proud the way we went and fought.”

Instead of bringing down a 4-3 defense or a scheme he’s used for years, Walters arrives at Illinois with no exact plans for his defense, and neither does Bielema, though he wants a defense that can confuse a quarterback, shrink the middle and tighten passing windows.

“You gotta do what’s best suited for your roster and not try to make them do what you’re trying to do,” Walters said. “That’s the fun part of play calling: the creating. It’ll be fun to not marry philosophies or systems. It’s an exciting challenge.”

Walters’ belief of how he will operate the Illini defense could be refreshing. But it could also spell disaster. Lovie Smith was stubborn about his turnovers method, usually saying the system produced turnovers and not luck. Smith never made a fundamental change, and the end result was a bottom-tier Big Ten defense.

But at the same time, Walters and Bielema should have their eye on creating a regular winner that has a strong, consistent foundation, which Bielema benefitted greatly from at Wisconsin.

To Walters’ credit, this view is consistent with how he feels about the game of football: You play for the game, not the position. He believes a football player has to be able to adapt and be flexible. It’s the reason why he asked Barnett to switch him from quarterback to safety.

As the offseason continues, Walter is assembling his vision for the Illini defense. He and Bielema will begin to evaluate new assistants while Walters is ready to get on the phone to try to convince certain seniors to come back for the 2021 season.

Before Walters took up Bielema’s offer, the then-Missouri coordinator was scouting the Iowa Hawkeye offense while preparing for the Music City Bowl.

One of the games he watched was the Hawkeyes’ 35-21 victory over the Illini. Instead of pointing out how the Illini gave up 35 unanswered points or the porous secondary, he found the positives.

“I didn’t see a lot of disparity between the two,” said Walters on the roster talent between Iowa and Illinois. “With the right pieces in place, (Illinois) can be special. I wouldn’t be here if I didn’t think we could build something special.”