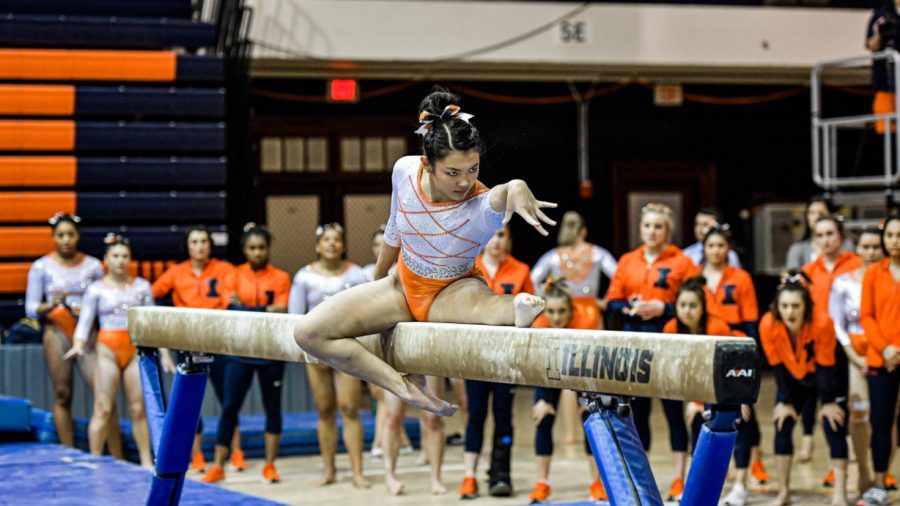 When the women’s gymnastics schedule was released, there was a sense of relief in the building about finally having games set in stone, appreciating that hard work would finally pay off — and also excitement for some competition.

“Nebraska is always a very solid team, a great opponent. It’s a great arena to compete in,” said head coach Nadalie Walsh. “We’re going to be really grateful, not only to be competing ourselves, but happy for Nebraska, that they’re meeting that victory of getting to have a competition as well, just because you cannot take any day for granted. Pointing to Nebraska, we feel confident in the sense that we’re going to do what we can do well, and even though it’s our first meet, it’s not our first time doing gymnastics. And so we’re going to go out and just do what we do every day.”

Sophomore Mia Takekawa considered the Cornhuskers one of the top opponents who could get in the way of the Illini’s pursuit of a Big Ten Championship. Since joining the conference, Nebraska has always been in the mix for titles, winning two regular-season titles and two conference tournament titles.

Last time they competed against Nebraska, Illinois lost 196.750 to 196.550 at the Big Five meet, which determined conference tournament seeding.

“I think the biggest thing going into this first meet as we start our COVID season off is just confidence because we all know that we can hit our skills,” Takekawa said. “But I think not having the preseason that we would usually have, talking a lot about the mental strength side of our sport instead of thinking about what we didn’t do this preseason shows how mentally strong that we’ve become over the past six months, seven months. … We’ve had a lot of meetings and training for that.”

In the offseason to raise the Illini’s confidence level, Walsh gave everyone frustration packets, exercises that were meant to frustrate the gymnasts and require them to overcome the challenge they chose to overcome.

Gymnastics is a sport of frustration, so mastering the ability to not let it consume you and remain focused on competing at the highest level is always a goal during meets. Walsh didn’t want the extensive time off and constant bad news to demoralize her team and make them lose focus on the next season.

Takekawa attempted to learn how to juggle a soccer ball. With nothing to do during the lockdown, she eventually got up to eight times in a row, which was a major accomplishment for her since she doesn’t play soccer.

Senior Nicole Biondi attempted to learn how to flip a hat onto her head. It didn’t go so well, but it kept her sharp during the summer.

“Our goal for this year absolutely is one: a Big Ten title. And what we need to do is just win every single day,” Walsh said. “That makes the results at Big Ten a reflection of who we are. We have to know who we are before we walk out onto the field. They know who they are and are confident young women, and I think that they believe that anything is possible.”

Takekawa echoed Walsh’s sentiment, emphasizing that consistency is a must. They have to build upon each meet every week to get where they want to be.

The most successful teams are always the closest and most unified, uplifting each other and having each other’s backs in the face of adversity.