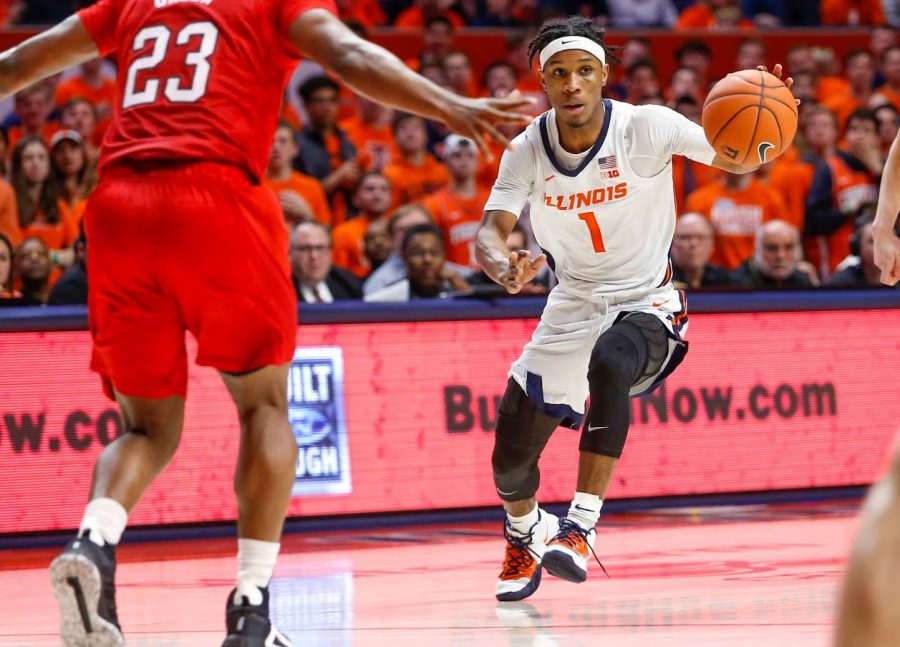 Senior Trent Frazier drives forward during the game against Nebraska on Feb. 24, 2020.

Following losses over the weekend, both the Illinois men’s and women’s basketball games scheduled this week were postponed due to COVID-related issues within their respective opponents’ programs. Though this is the first men’s Big Ten game to get postponed, the women’s team has now dealt with two postponements, with the other issue occurring with the team’s scheduled meeting with Michigan on Dec. 19.

Penn State, Michigan State and Nebraska, who Illinois was supposed to play on Wednesday, all have COVID-related issues within their programs, with seven Big Ten games postponed so far this season.

The Nittany Lions haven’t played in over two weeks, and the program paused all operations on Jan. 6 following several positive tests. The team has a tough stretch of games once they return to the court on Jan. 17, as they must play four games in the span of just seven days, including a showdown with the Illini at State Farm Center on Jan. 19.

On Jan. 11, the Cornhuskers announced they had also been forced to pause team-related activities, and the team has already postponed three games this season. Nebraska is scheduled to face Minnesota on Jan. 20, though it is unclear if the team will resume operations or have enough eligible players by that time.

Michigan State has postponed two games due to COVID issues within its program, though the team has not officially announced that it is halting operations. The Spartans are scheduled to play the Illini in East Lansing on Jan. 23, but the game could be at risk if the team does not have enough eligible players to compete.

Nine Big Ten women’s games have been postponed so far due to COVID-related issues, as Rutgers, Michigan State, Ohio State and Michigan have all dealt with positive tests within their programs this season.

The Scarlet Knights have not competed since Jan. 3 and have postponed four games over the last two weeks due to COVID issues. The team is scheduled to return to action on Jan. 21 against Penn State, and the team will be thrown right back into Big Ten play with a busy schedule, as they will play three games in eight days.

Michigan State is the second team in the midst of COVID issues, as the team’s meeting with Illinois on Thursday was postponed due to positive tests with the Spartan program. Decisions have not yet been made about any future games, though it is unlikely that the team’s scheduled meeting with in-state rival Michigan on Monday will be played.

Michigan and Ohio State have both postponed multiple games this season due to positive tests within their respective programs, though both teams have resumed operations and have returned to action. The Wolverines postponed two games while the Buckeyes paused team-related activities for nearly three weeks and were forced to postpone three games during that time.

Per Big Ten protocols, any student-athlete that receives a positive COVID-19 test result must sit out for at least 17 days before being eligible to return.