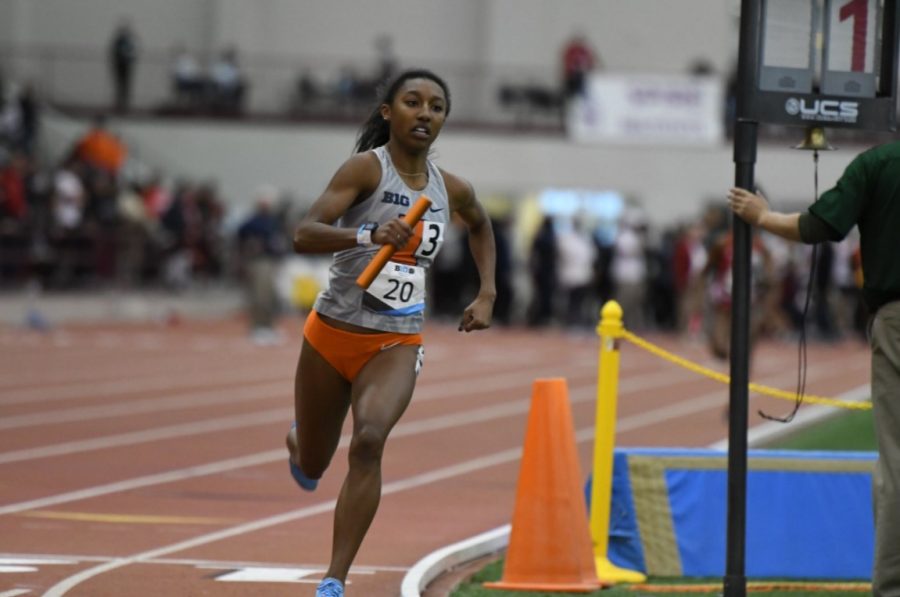 Sophomore Olivia Howell competes in a relay race during a meet. Howell broke the Illinois record for fastest women’s 1000m during the tri-meet against Wisconsin and Northwestern on Saturday.

After months of built-up anticipation, the Illini finally got to showcase a wide range of talent and athleticism in a trip up north to Madison, Wisconsin. In a tri-meet against rivals Wisconsin and Northwestern, the men’s and women’s track and field programs notched victories in multiple categories to kick off the new season.

“I found our performance today to be inspiring,” said director of track & field/cross country Mike Turk in a press release. “I can’t stress how proud I am of the way we have responded to the long layoff. We were competitive, enthusiastic and we are going home celebrating the opportunity to compete and a whole bunch of great performances.”

In his first meet in the orange and blue, Michigan transfer Manning Plater 73’’10 weight throw secured himself first place in the event. His throw will have to settle as second-best in school history, with it being four inches short of the school record.

But his performance was far from an outlier. The Illini men secured the top three performances in the shot put, with William Renzy’s 56”8 ¾ throw securing him top honors.

In his collegiate debut, freshman Nick Drayden stole the show in the long jump with his 22 and 2 ¼ foot jump placing him first among the competition.

As for the men’s running events, Bret Daniels was the shining star for the Illini, placing first in the 60m hurdle with a time of 8.03 seconds.

While Daniels performed well, the remaining of the Illini didn’t share as much luck. The Badgers took first place in six out of seven running events.

In the 1,000 meter final, sophomore Olivia Howell showed no rust with her first-place finish. The Solon, Ohio, native finished 1.2 seconds better than the runner-up with a time of 2:46.52. Two of her teammates finished five seconds behind, good for third and fourth place.

The Illini also showed strength in the 3,000m final with the Illini taking home first, second and third place over the Badgers and Wildcats. Senior Rebecca Craddock was the clear-cut best, though, with a time of 9:37.38 — almost four seconds faster than her teammate.

“I think they showed they are ready to go,” Turk said. “Rebecca Craddock ran upfront and was in command the entire race, rock-solid and then came Aladadah, who closed well the last 100m, and McGrath, for a 1-2-3 Illini finish.”

While the Badgers outperformed the Illini in other running events, Illinois picked up the slack in the jumping events.

Overall, the Illini won eight events on the day. Illinois continues their season with a road trip to Iowa City, where they will participate in the Hawkeye-sponsored Larry Wieczorek Invitational. The two-day meet will take place on Friday and Jan. 23.