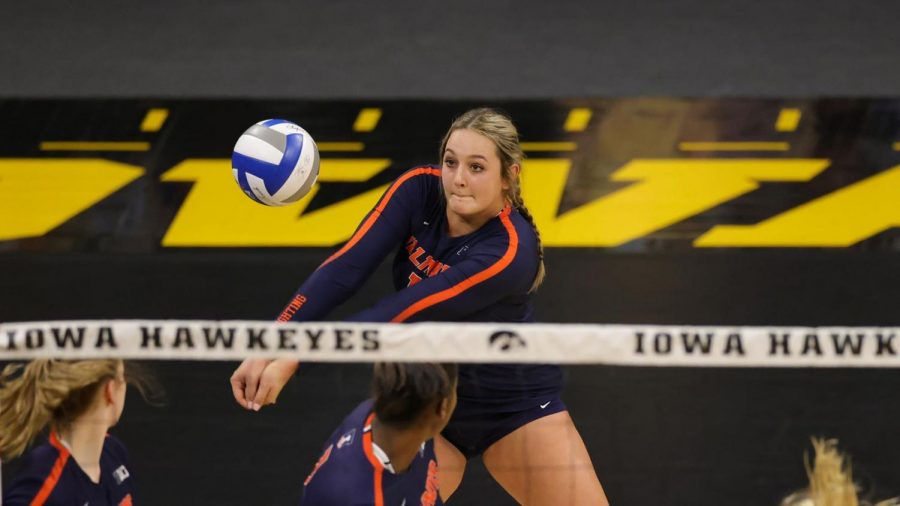 Redshirt Freshman Ellie Holzman bumps the ball during the game against Iowa on Saturday.

The Illini continued their strong start to the season, moving up to 2-0 with a dominant 3-1 win over Iowa. After going back and forth yesterday, Illinois left little doubt they were the better team on the court, winning the second and fourth sets 25-13 and 25-14 respectively.

Redshirt freshman Ellie Holzman shined bright today, registering 15 kills and hitting .355 in her second college match. After sitting out last season with an injury, Holzman has looked excellent through two games and projects to be a big part of this season and Illinois’ future at the outside hitter position.

“The kid just wants it,” said head coach Chris Tamas. “She works hard every day, she’s a great teammate. She’s really good about studying the game and figuring out where it works for her game. She really uses her skill set to her advantage. She’s able to take big swings when she needs to and keep the ball in play when she needs to. I think that’s why she’s so successful right now.”

Holzman came out of high school as a top-level prospect, but there was always a question mark as to how good she would look after sitting out last season. Prior to this weekend, there had been over 800 days since her last competitive match.

“(I’ve been) keeping my head forward, not dwelling on the past,” Holzman said. “It was a definitely hard time to go through, but I knew that I had a lot to look forward to and a lot to be excited for. Just keeping my head down and working hard helped me get through.”

Another standout performance was sophomore Rylee Hinton, who has put up a career-high eight blocks on both Friday and Saturday. After seeing little playing time last season, it seems that she made some major improvement in the offseason.

“Rylee’s been great,” Tamas said. “She got a little bit of play time last year and came to us and said ‘hey I really want to be on the floor, what can I do to improve my game?’ As soon as you get an athlete who really wants to know the ins and outs of how to get better, that’s the drive that we’re looking for. She definitely has it — not that our other players don’t. She’s really stepped up her game, changed a lot of habits in her life to align with trying to be on the floor and doing really well in the game.”

Senior Megan Cooney has continued to put up strong numbers as well, registering 13 kills, but was hindered by seven errors.

Illinois started out the match strong with 25-20 and 25-13 wins in the first and second set, but Iowa came out playing with an added desperation after the intermission, forcing a fourth set with a 25-19 win. The Illini remained focused and seized the fourth set with a commanding 25-13 win.

“We’re happy to come out of the weekend on the road 2-0,” Tamas said. “Every team in the Big Ten is tough, so we’re never going to say it’s a bad win. There’s definitely things we can clean up and I know the team knows that. Good to get the first weekend under our belts and happy to come out of it 2-0. We’re going from Iowa to go back home to face the number one team in the country. Better be ready.”

Next week, Illinois will look to remain undefeated and begin their home schedule hosting No. 1 ranked Wisconsin.