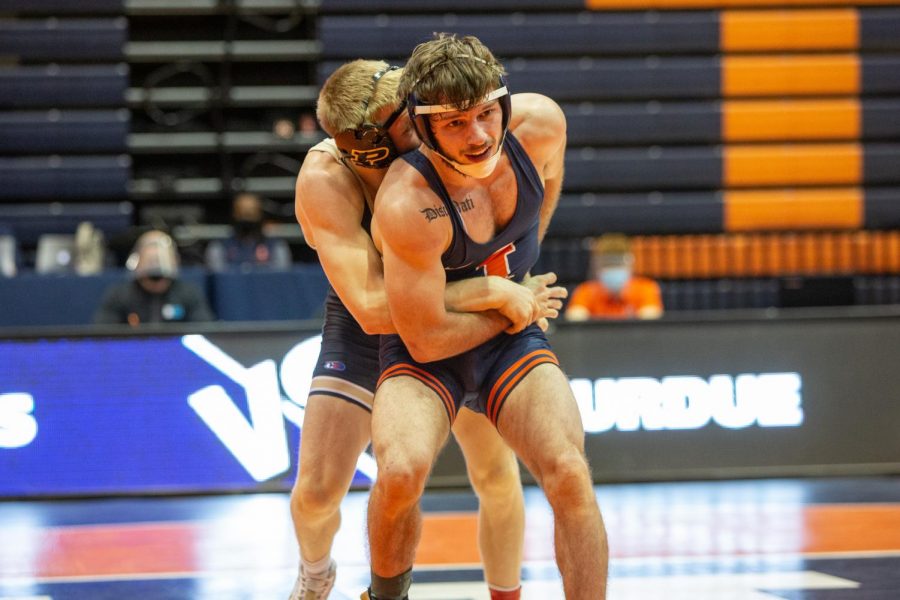 Senior Dylan Duncan attempts to break the hold of his opponent during the meet against Purdue on Friday. The men’s wrestling team is undefeated this season (4-0).

Just 10 months ago, the sports world came to a sudden halt due to the COVID-19 pandemic. Winter sport playoffs and tournaments were canceled, and almost the entirety of spring seasons were never played. Now, sports have returned with nine different Illini teams currently in action, though multiple games for multiple teams have already interrupted competition. Regardless, let’s take a look at how these programs have fared so far in this unusual, unpredictable and unprecedented season.

The expectations for the men’s basketball team were through the roof to start the season, as the team were ranked No. 8 in the AP preseason rankings. After opening the season with three straight wins against North Carolina A&T, Chicago State and Ohio, Illinois traveled to take on No. 2 Baylor in one of the most highly anticipated matchups in recent history, though they would ultimately fall 82-69. The Illini would then fall to the Missouri Tigers in the Braggin’ Rights game for the third straight season.

The team entered the season as one of the favorites to win the Big Ten, but they now sit fourth in the conference at 6-3 after losses to Rutgers in the second Big Ten game of the season and back-to-back defeats at home to Maryland and Ohio State. Though Illinois has beaten Minnesota, Penn State twice, Indiana, Purdue and Northwestern, the team has yet to face any of the “big boys” of the Big Ten. With the team’s toughest stretch yet to come (they still have to face Iowa, Michigan, Wisconsin (twice), Ohio State and Minnesota), these next few games will help determine where the Illini truly stand among Big Ten teams and among March Madness-caliber teams.

Despite losing last season’s leading scorer Petra Holešínská, who transferred to North Carolina, the Illini opened the season strong, winning two of its first three games against non-conference opposition: a 68-49 win over Indiana State to open the season and a close 53-50 victory over Omaha.

In Big Ten play, however, the team has dearly missed its top scorer, falling in six straight games to open its Big Ten campaign while averaging under 60 points per game while allowing just over 80 points each contest. But the team has also faced some of the best teams in the conference, including Iowa, Indiana, Ohio State, Michigan and Northwestern. Illinois has a stretch of winnable games coming up, as the team has six straight games against unranked opponents.

Like the men’s team, the women’s gymnastics team competed on Jan. 15 for the first time since early March. After breakout performances from several Illini gymnasts last season, the team looked solid in its first meet, taking down Nebraska 195.475-193.400 and winning three of the four events. Individually, sophomore Lexi Powe won on vault (9.825), freshman Kaitlyn Ewald won on bars (9.900) and junior Shaylah Scott won on floor (9.875). Three Illini made their debuts, Ewald, who won her first career event title, Amelia Knight and Abby Mueller.

After receiving news that all sports would be canceled for the remainder of the season in the middle of a meet in March, the Illini swimming and diving team returned to action on Jan. 16. The team dropped its season opener to Purdue 173-122, though freshman Cara Bognar and junior Abigail Cabush both had multiple first-place finishes. Cabush won two freestyle events, 100-yard (51.77 seconds) and 200-yard (1:51.37), while Bognar took first place in 200-yard butterfly (2:02.56) and 500-yard freestyle (4:59.59).

After not playing since Dec. 6, 2019, the volleyball team opened up its 2021 campaign with two matches on the road against Iowa. The team is almost entirely transformed from its last game, though the Illini picked up two wins to start off its new season on a strong note. In the first match, senior Megan Cooney led the team with 17 kills, while senior Kylie Bruder registered her first career double-double with 21 assists and 10 digs, both career-highs, as the Illini took down the Hawkeyes 3-1 (25-20, 23-25, 25-15, 25-23) in dominant fashion.

On Saturday, the Illini carried their momentum into the match and pulled off the sweep, winning 3-1 (25-20, 25-13, 19-25, 25-13). Redshirt freshman Ellie Holzman put together a solid performance, finishing with a match-high 15 kills, while Bruder and redshirt sophomore Diana Brown had 20 and 19 assists, respectively.

Arguably the most successful Illini program so far this season, the men’s wrestling team is off to an undefeated start. The team has won all four meets, including against three ranked opponents: No. 8 Ohio State, No. 22 Wisconsin and No. 17 Purdue. The team is also ranked in the top-10 nationally, currently sitting at No. 7.

Sophomores Lucas Byrd and Luke Luffman and redshirt senior Dylan Duncan are all off to undefeated starts, helping guide the team to a 4-0 start. The team looks like a true Big Ten contender thus far, though they will be tested in a tri-meet with No. 1 Iowa and No. 2 Michigan next weekend.