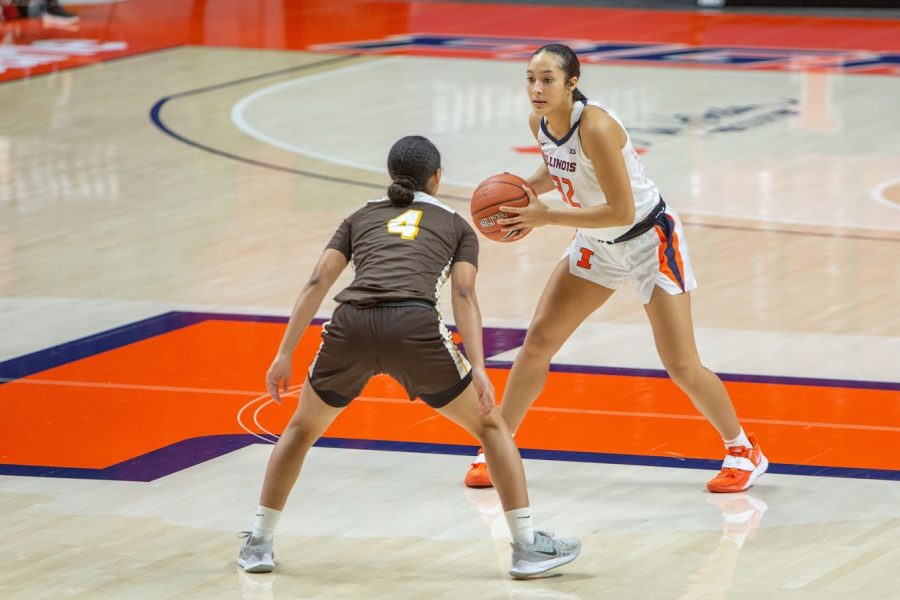 Freshman guard Aaliyah Nye looks to pass during the game against Valparaiso on Dec. 2.

The Illinois women’s basketball team will take on Penn State Thursday, looking to get their first conference win of the season. Ironically enough, the Illini’s last win came a year ago against Penn State.

In that matchup, the Illini relied heavily on Petra Holešínská, but since Holešínská transferred in the summer, the Illini will need to lean on others. Fortunately for Illinois, sophomore forward Kennedi Myles played well in that game, scoring 14 points and grabbing nine rebounds.

Despite struggles this year against the rest of the Big Ten, the Illini feel that this could be the turning point in their season.

“The whole season has been a lot of ups and downs, but we’re always progressing in something,” said sophomore guard Jeanae Terry. “I think we know what we need to do against Penn State to get the win and turn the season around.”

Recently, the Nittany Lions underwent a major blow when their leading scorer, graduate Kelly Jekot was injured against Northwestern and will miss the rest of the season.

Penn State, however, still runs a system that can frustrate the Illini.

“(Penn State) wants about 90 possessions per game,” Fahey said. “There is ‘we’ want to keep shooting and get as many attempts. They do that, they like to press, that’s their style of play. Their tempo is extremely high.”

It will be tough for the Illini to match that playstyle as they have been playing slower because of injuries. It helps that the Illini just got back freshman guard Aaliyah Nye against Nebraska.

In that game, Nye was a spark plug for an ailing offense. Coming off the bench, she scored 15 points and made three shots from beyond the arc. For a team that has been struggling to score, and specifically struggled to make threes, Nye can really help.

“(Aaliyah) was out for a little bit, so we’re just getting her back in the flow of the game,” Fahey said. “The one thing I like about her is that she’s aggressive. The more and more she comes back, the better she’s getting every day.”

The Illini are coming off of a tough loss to Nebraska. After nearly beating them last month, the Illini fell to a similar fate. Trailing by four points with under a minute left in the game, Nye made a big three to bring Illinois within a point. Two possessions later, the Illini would have a chance to take the lead but they would turn the ball over on back-to-back possessions.

It’s been a tough go for the Illini, but Monday’s game against Nebraska should give the Illini some confidence heading into the Penn State game. As players start to return to the lineup, the Illini’s bench will likely expand.

Following Penn State, the Illini will head up to Madison where they will see Wisconsin for the first time since being eliminated by them in last year’s Big Ten Tournament.