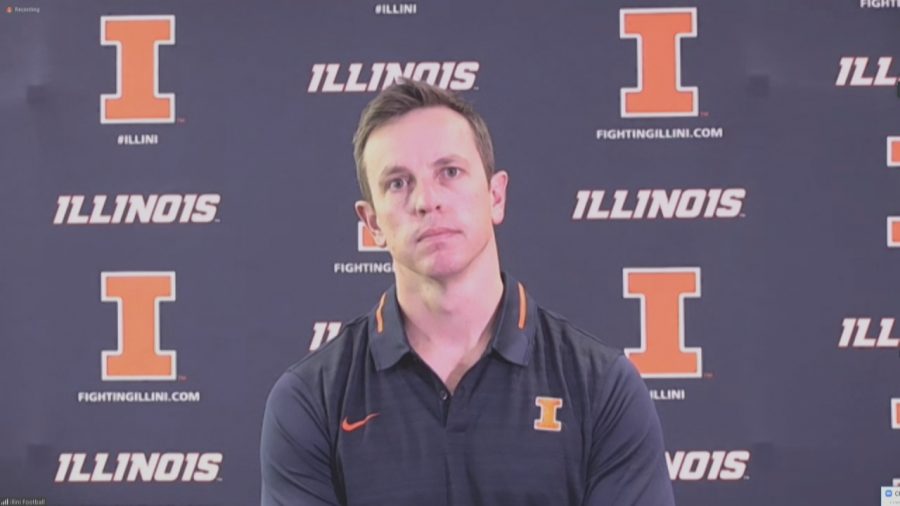 However, Kane is coming from Southern Methodist, where he was the defensive coordinator. Despite taking a smaller role at Illinois, Kane says there were a number of reasons for leaving SMU and joining an almost brand new Illini staff for 2021.

Kane is from Kansas City, Missouri, but his wife is from Chicago. Their three kids were born in Dekalb, Illinois while Kane was coaching at Northern Illinois.

On top of having family from the state and wanting to be close to them, Kane has ties to Bielema from previous coaching experiences. Kane was a graduate assistant for Bielema at Wisconsin and is impressed with what he brings to the table.

“I’ve had the pleasure of working with coach Bielema in the past,” Kane said. “How can you not take advantage of this and learn from Coach Bielema, who just spent three years in the NFL and two of which with arguably the best coach of all time.

“The other thing I wanted to do is I wanted to learn, I wanted to continue to grow as a coach … I’m at a point in my life where I think coach Bielema can guide me in what I want to get done.”

It wasn’t only Bielema, but some of the newly hired coaches at Illinois that Kane is impressed by. Kane has personal experience with some of his new fellow coaches, which was one of the leading drives for him to come to Illinois.

Seeing the other defensive coaches that Bielema has hired, including the diversity in age and knowing what they bring to the table impressed Kane, who appreciates a strong coaching staff. Illinois now has three coaches with coordinator experience on the defensive side of the ball, giving Kane experienced minds to work with this season.

“Now having the opportunity to come here, Ryan Walters is a great mind, a great coach. Andy Buh, Terrance Jamison, Aaron Henry, I mean this staff is awesome,” Kane said. “I have relationships from the past … Just the relationships and the familiarity with these guys, it was just like how can you not take advantage of this.”

Like many people surrounding the program, Kane sees Illinois as a diamond in the rough. The performance hasn’t been where most expect it to be over the past decade, but there’s a lot that Illinois has going for it to be able to perform at the level that people are hoping for.

Whether it’s a natural recruiting base, good coaches coming in or more, Kane wants to bring Illinois to the level that he thinks that it can perform at and is another big reason he came in to coach.

“I just think this is a sleeping giant as well,” Kane said. “Coach Bielema being from Illinois and doing what he’ll be able to do with his relationships, and the staff that you’ve seen be assembled is unbelievable. And I think we can take this program and take it to where, as an outsider looking at it from previous experience, can be a really really good place.”

Now here at Illinois and talking with the coaches, Kane is ready to start working immediately. Like every other coach Bielema has hired, Kane sees recruiting as a major area of improvement needed for the Illini to succeed.

Being from Kansas City, Kane will be able to recruit in an area that only five players in the history of the program have ever come from. He plans on using his connections to evolve the recruiting base, and also knows what type of guy he and the rest of the coaching staff want for their team.

At the group Kane will be recruiting for and coaching, outside linebackers, Illinois looks thin at on paper after losing multiple key players after last season. But Kane doesn’t see the group as a liability.

Kane is encouraged by the group that he’ll be working with for 2021, and even while beginning to recruit for next year and searching the transfer portal, he feels that he has a group ready to go that will help the team win games.

Kane, like the rest of Bielema’s staff, is fired up and ready to go. Nine new coaches along with one returner from Lovie Smith’s staff have the Illini optimistic about what’s to come for the 2021 season and beyond.

For Kane, the decision to come to Illinois wasn’t as difficult as most. Despite taking a smaller role as associate head coach/outside linebackers coach at Illinois after previous defensive coordinator stints, Kane sees the program heading in the right direction and wants to be a part of what Bielema has to offer.