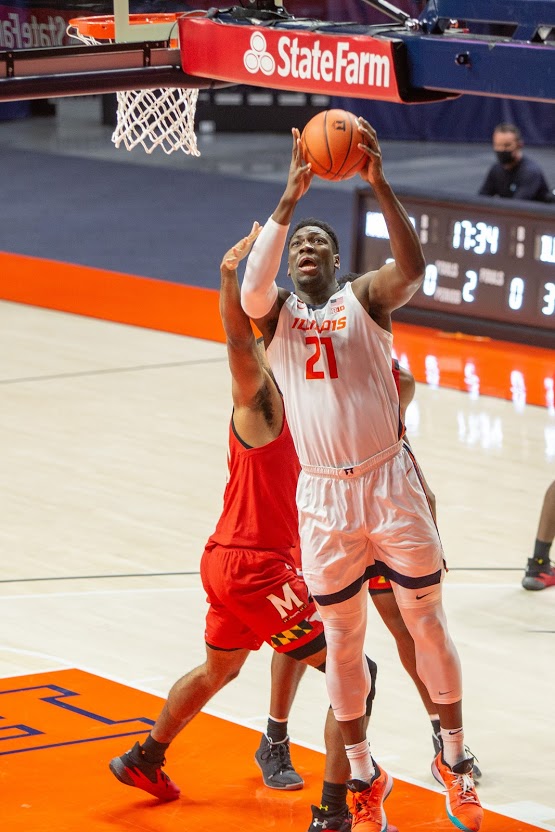 Sophomore Kofi Cockburn jumps to shoot during the game against Maryland on Jan. 11. The Illini will face off with Iowa tonight at State Farm Center.

When the Big Ten schedule was released, both Iowa and Illinois fans circled Jan. 29, the sole regular season matchup between the two teams this season.

There is some historical animosity between the two programs, but things escalated last season. In the first matchup, a Hawkeye victory, Iowa wing Joe Wieskamp dunked the ball with 12 seconds left up to put his team up by 10. This didn’t sit well with Illinois assistant Chin Coleman, who had some words with Iowa head coach Fran McCaffery after the game.

In the second matchup, Illinois snuck out a 78-76 victory at home on the last day of the regular season to clinch fourth place in the Big Ten. The game featured a minor dust-up between Da’Monte Williams and Connor McCaffery, resulting in double technical fouls.

Entering the season, both Illinois and Iowa were preseason top-10 teams. While Illinois (10-5) has struggled a bit, Iowa (12-3) has looked the part. Let’s dive into some of the key questions for Friday night’s matchup.

Where does Illinois focus their defensive attention?

There is no offense more efficient than Iowa’s, ranking No. 1 in KenPom. When you have the nation’s leading scorer in Luka Garza, that helps immensely. Garza has been on a tear this season, averaging 26.9 points per game on video game-like shooting splits (61% from the field, 46% from three, 75% from the free throw line). A lot of teams have opted to double-team him, but that creates openings for Iowa’s shooters. Jordan Bohannon, CJ Fredrick and Wieskamp are all potent shooters, making a combined 92 attempts on the season on 37% shooting.

With Kofi Cockburn inside, Illinois theoretically has someone with enough size where they don’t need to send two players at Garza. Garza will still probably get his points. He scored over 25 points in both meetings last year and has been held under 20 points just three times this season. Indiana’s defense in their win over Iowa could be a good blueprint; let Garza get his points but run the others off the line. Garza scored 28 on the Hoosiers, but Bohannon, Fredrick and Wieskamp went a combined 6-for-21 in the loss.

Can Ayo Dosunmu have another moment?

Dosunmu’s scoring has dipped a bit in conference play. He’s scored 15 points or less in three of the past five games. He’s been vocal about trying to get his teammates involved early, but against Iowa, Illinois will need every point they can get from Dosunmu.

For as good as the Hawkeyes’ offense is, their defense is almost catastrophic, ranking 99th in KenPom. They don’t have the size, athletes or rim protection to slow down Illinois. Dosunmu was rather quiet in the two matchups last season, averaging just 14. But he’s going to need to be the guy that leads Illinois on Friday and play one of his best games of the season, something he’s shown he’s capable of.

Can Illinois’ role players rise to the occasion?

If Dosunmu does bring his A-game, the Illini will still need more. Production from Trent Frazier, Adam Miller and Andre Curbelo has been streaky this season. Two of those players haven’t scored double figures in the same game since the Big Ten opener. After a hot start in conference play, Curbelo has hit a freshman slump. Iowa is going to concede open threes, and Illinois’ role players will need to capitalize on that. The Illini are 6-1 when Frazier is in double-figures.

Will Illinois sustain a high-level of play for 40 minutes?

Illinois’ habit of playing lackadaisical for stretches caught up to them when they lost consecutive games to Ohio State and Maryland. They can get away with being down 15 points at halftime to Northwestern, but take your foot off the gas for five minutes against Iowa and you’re toast. Illinois will need to play their hardest for 40 minutes on Friday.

While Illinois has maintained an AP ranking all season, they don’t have a signature win yet. Nothing to hang their hat on and say “this is why we were a top ten team.” That can change Friday with a win against the Hawkeyes, but they’ll need to play their best game of the season to do so.