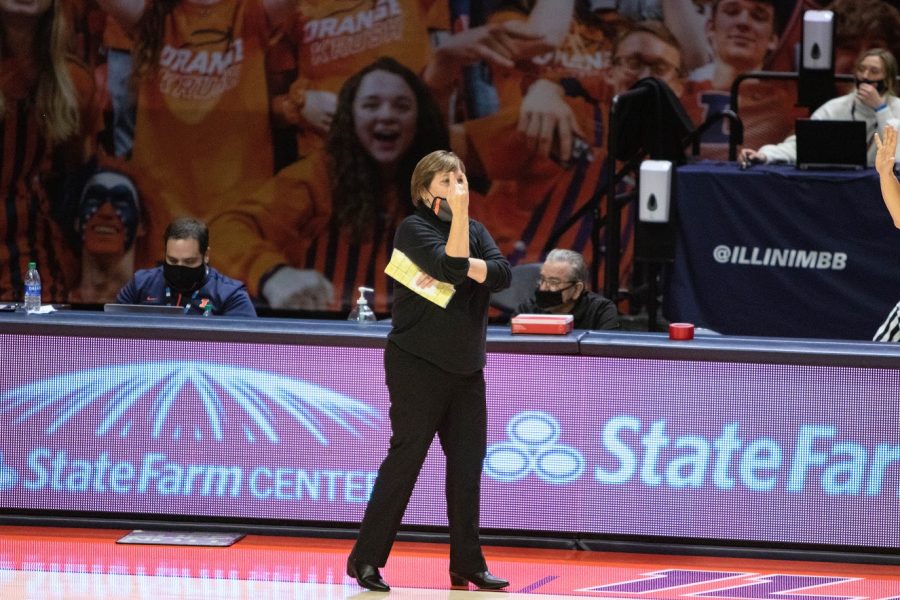 Women’s Basketball coach Nancy Fahey speaks to her players during the game against Nebraska on Monday. Illinois will play Wisconsin tonight in Madison.

The Illinois women’s basketball team is off to play at Wisconsin Sunday afternoon, with the Illini (2-9 overall, 0-8 in conference play) and the Badgers (3-11, 0-11) both looking for their first conference win of the season.

The Badgers are coming off a blowout 84-68 loss to Nebraska Thursday night as they face Illinois for the first time this season.

The teams last faced each other on Mar. 4 in the Big Ten tournament, with Wisconsin winning the matchup, 71-55. Then-senior Abby Laszewski led the Badgers with 24 points, and Lewis had 14.

Head coach Nancy Fahey said slowing down Hilliard and Lewis will be crucial to an Illini victory.

“They have a lot of good players,” Fahey said. “But you know, Sydney Hilliard, and Imani Lewis and Sara Stapleton to me are key stops for them.”

Historically, the all-time series between the Illini and Badgers has been competitive, and the longest win streak for either team is four games, set by Illinois from January 1986 to February 1987. The all-time series now stands at 37-39 in the Badgers’ favor, and the Illini haven’t won in the series in almost two years, last defeating Wisconsin on Feb. 10, 2019 — a 78-68 win at State Farm Center.

After Illinois dropped 76 points against Penn State — about 15.5 points above their season average of 60.4 points per game — Fahey was glad the team scored more points but stressed it can’t be a one-time thing.

“I thought the good thing about the Penn State (game) we built on is that, you know, we finally (got) our point production up,” Fahey said. “We’ve been talking about that, we keep working on it, you know, 76 points, puts you in a lot more ball games than where we were at.”

With increased momentum after the Penn State game, Peebles is looking forward to the chance to get the Illini’s first conference win.

“Just ready to get this (win),” Peebles said.