Indiana preview: Shutting down Jackson-Davis, Franklin is key in second showdown of season 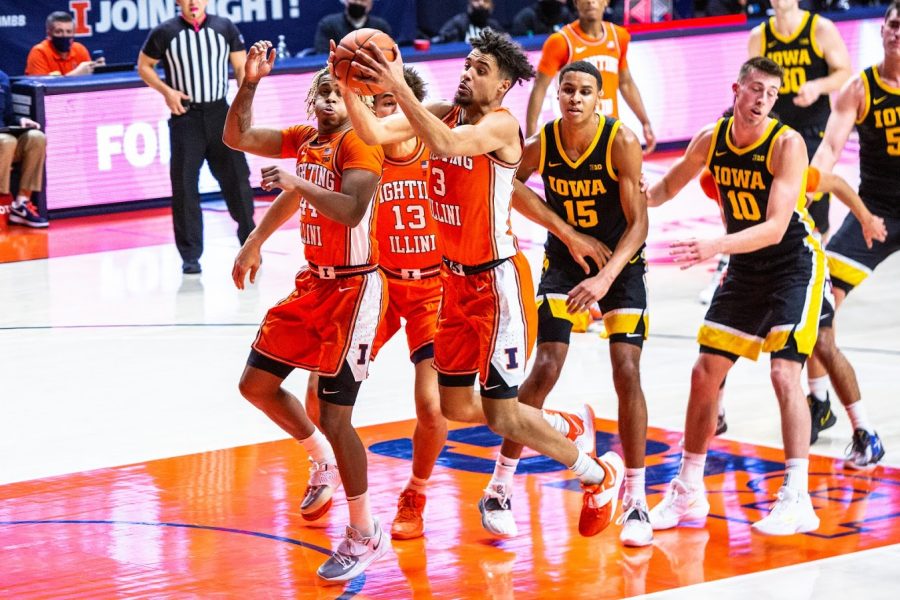 Junior forward Jacob Grandison captures a rebound during the game against Iowa on Friday. The Illini will face off against Indiana tonight in Bloomington.

For the second time this season, Illinois and Indiana are set to face each other. The neighboring state schools played in Champaign in late December, with the Illini coming out on top 69-60.

The game was close for the first three quarters of action before Illinois pulled away at the end via a scoring rampage from junior Ayo Dosunmu.

The Illini are winners of two straight, while the Hoosiers have been up and down lately. But, they did take down No. 8 Iowa less than two weeks ago, holding them to a season-low 69 points. Here’s what to watch for ahead of Tuesday night’s matchup.

Who wins the battle inside?

Sophomores Trayce Jackson-Davis and Kofi Cockburn will square off for the third time in their young careers. The Illini were able to limit Jackson-Davis in the first matchup, holding him to a season-low 11 points on 3-13 shooting. Illinois did a good job of bringing doubles on the dribble and forcing him to go right. Illinois’ bigs will need to bring that same defensive intensity on Tuesday.

“We all know that Trayce is a very gifted player,” Underwood said. “He’s been off the charts in the last five games, getting to the foul line.”

For Indiana to win, they’ll need Jackson-Davis to outplay Cockburn, which didn’t occur in the first game, as Cockburn went for 15 points and 15 rebounds.

Will Illinois’ role players find their rhythm against Indiana’s defense?

Despite their offensive inconsistencies, the Hoosiers’ defense has been one of the better units in the league this season. In the first matchup, Illinois got 45 points from Dosunmu and Cockburn but 24 points from all other players. Trent Frazier, Jacob Grandison and Adam Miller went a combined 0-13 from the field. Frazier and Grandison are coming off some of their best performances of the season, which is a good sign, but Illinois likely won’t win if that trio goes 0-13 again.

The biggest reason Indiana was able to stay in the game against Illinois was the play of sophomore guard Armaan Franklin, who went for a season-high 23 points. The 6-foot-4 Indianapolis native has been the Hoosiers’ most consistent perimeter threat this season. Meanwhile, senior guard Trent Frazier has been the defensive stopper for Illinois, holding Iowa’s Jordan Bohannon and Minnesota’s Marcus Carr to single digits. Underwood knows Frazier will play a key part, but he also knows it will take a team effort to stop Franklin.

“It’ll be a group effort,” Underwood said. “He’s a really good player, and they’re doing a lot more with him. He’s handling the ball a lot more. They put him in a lot of ball-screen actions … to get shots and opportunities. We lost him a few times in transition.”

After the home loss to Ohio State, Underwood had a message for his team: They had to stop riding this “emotional roller-coaster.” With two consecutive wins in the rearview mirror, including their best win of the season coming against Iowa, things are starting to trend in the right direction for Illinois. However, they can’t follow up Friday’s game with a no-show on Tuesday in Bloomington.

“Forget about it and refocus ourselves,” said junior forward Jacob Grandison. “Looking where we’re stepping next when we’re walking. It’s the next game of the season.”

Tuesday night’s game is scheduled for an 8 p.m. central time tip-off, and the game can be watched on ESPN.