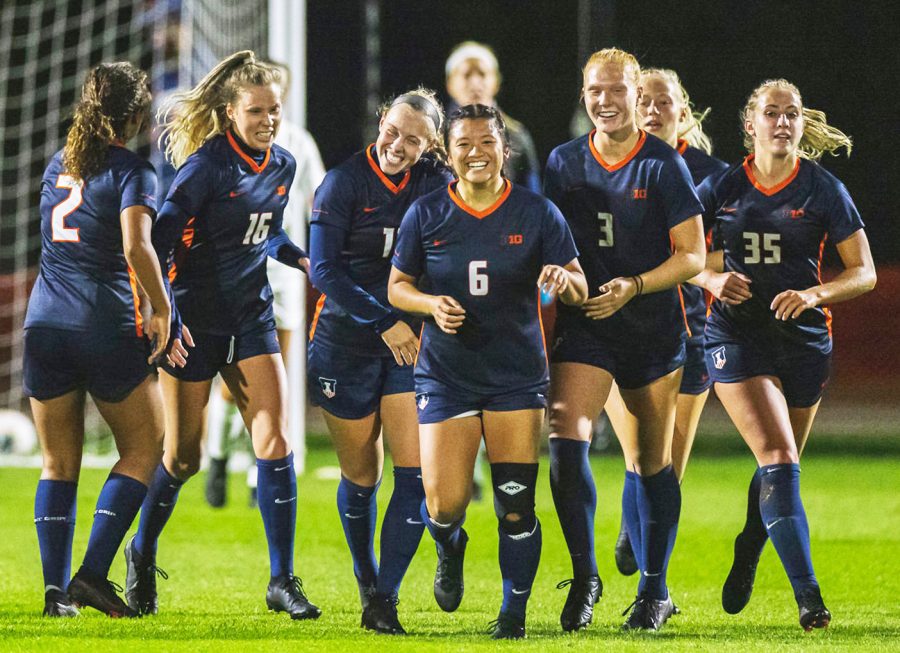 Senior forward Katie Le (6) celebrates with her teammates after a goal is scored during competition. Le talks about persevering through COVID-19 as a student athlete.

That’s what senior forward Katie Le felt back in August after Big Ten announced all fall sports would be postponed.

“I remember getting the news that season was canceled and was crying on the field,” Le said.

Regardless of the season, the team still kept practicing, though there was no clear goal or set date to look forward to. The coaches were able to create an intrasquad Friday Night Lights series to have some sort of competition so the girls could suit up and have something to play for.

Though the series gave them a sense of competition, sophomore defender Eileen Murphy said it didn’t have the same thrill or rush as playing a non-conference or Big Ten game.

Jan. 10 was when the Illini arrived back on campus for their required week-long quarantine and were able to get back into practice on Jan. 18.

A couple of days later, on Jan. 22, was when the schedule was released, revealing the season will start on Feb. 20 with three home games in a row, including a season opener against Purdue.

With a season and future games already in their minds, Le and Murphy say there has been a noticeable difference in the mentality and focus of practice. The intensity is high, and everyone is motivated for their first match.

For the first two weeks on campus, practices were first voluntary, and the coaches weren’t present. Le said even without the coaches it was full of energy and everyone was pushing each other to get better.

“Even this week, it was eight hours with the coaches, and we still used the time that we got for our advantage, and we’re excited to get back into 20 hour weeks and still work hard and keep going,” Le said.

Due to the weather, the team has been practicing in the Irwin Indoor Football Practice Facility. A disadvantage to this is a football field is not as wide or as long as a soccer field, so the coaches have had to get creative with drills to make use of what they have.

“The other day we set up our back four 75 or 80 yards wide so that they really get a sense of what it’s like from sideline to sideline on a true soccer field,” said head coach Janet Rayfield. “Then when we want to go 60 or 70 yards of length from what it’s like from the goal to the mid-stripe and beyond the other side, then we can turn and go the other direction.”

Though the season was delayed, the extended amount of time to prepare gave the team a chance to build up chemistry on the field. Especially for the freshmen, it gave them a chance to get integrated into the team.

“Our coaches have stressed this year how lucky that we have been able to play together for a whole semester, so our chemistry is definitely a lot better,” Murphy said. “Like you can even tell that it’s definitely helped that we had more time to play with each other.”

As the home opener inches closer and closer, everyone is excited and ready to finally get on the field and play a competitive game.

With Demirjian Park wrapping up construction, the Illini will play there at some point during the season. Fans will not be allowed in, but attendance for families is still up in the air. Considering soccer is played outdoors and football was cleared to have families present in Memorial Stadium, time will only tell.

As the cold winter weather persists, the Illini have continued to practice inside, but Rayfield said the team is taking it step by step to get the opportunity to get out on a full-sized pitch. Currently, the coaches are being thoughtful about the health and safety of the players, but they hope the first time they are out in the field is not in full uniform against Purdue.