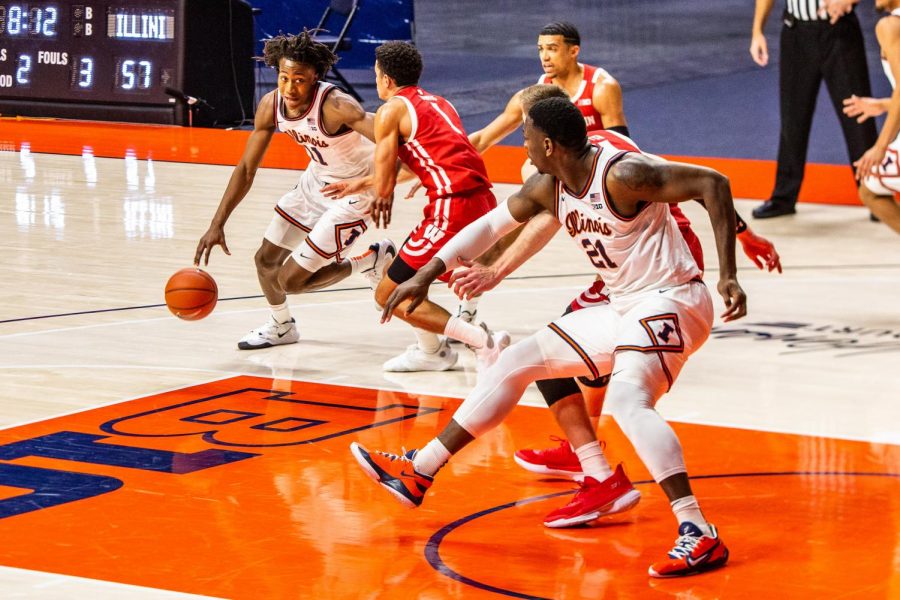 Ayo Dosunmu looks to Kofi Cockburn while dribbling during Illinois’ game against Wisconsin on Saturday.

Ayo Dosunmu has had a handful of big moments and games in his Illinois career, but a triple-double wasn’t one of them. That was until Saturday when he exploded on the Badgers for 23 points, 12 rebounds and 12 assists. Dosunmu’s had double-doubles with points and rebounds, but the 12 assists surpassed his previous career-high of eleven from a game last season against Purdue.

It was a game that showed his growth in that area, as he made several impressive reads and passes. I did my best to try and rank all of his assists from Saturday.

This was a pretty simple entry pass from Dosunmu. He put it so only Bezhanishvili could grab it, but it was a little high. From there, the junior forward did most of the work. I’m a little surprised that this counted as an assist, but it added to the total nonetheless.

Again, this play didn’t require anything overly complex for Dosunmu. This appeared to be a predetermined play to get Miller a three off a screen. He didn’t have to look anyone off and the pass didn’t travel super far. Still, he hit his former high school teammate right in his shooting pocket.

Another pretty basic high-low entry feed. Cockburn is a pretty easy target to hit, but Dosunmu has amazing touch on this ball, perfectly lobbing it over the defender’s head and allowing Cockburn’s momentum to carry him to the dunk.

9. Slips and kicks to Grandison for three

I couldn’t decide if this was incredibly impressive or lucky, and I think it’s a bit of both. Dosunmu slips on the drive and stumbles into Aleem Ford. But, this creates an opening for Jacob Grandison who Dosunmu taps the ball to for an open three.

From here on out, ranking these got pretty challenging. This was the first time Dosunmu got an assist off of the dribble-handoff into high pick-and-roll play. He comes off the screen and surveys his options before finding a wide-open Cockburn under the hoop, but did a good job not staring it down. The pass allowed Cockburn’s momentum to carry him towards the rim.

7. Alley-oop to the big man

The most thunderous Cockburn slam of the day came off this pick-and-roll feed. Dosunmu gets downhill and had plenty of options. Both Frazier and Grandison are open on the perimeter. But when you have a seven-foot, 285-pound center, sometimes you can just lob it up. Like a quarterback throwing a jump-ball to a wide receiver, that’s what Dosunmu did. He placed it well above the smaller Wisconsin defenders, enabling Cockburn to throw it down.

One of the few times Dosunmu actually rejected the screen up top. He drives baseline and is met by Brad Davison who is tagging Cockburn’s roll. Dosunmu keeps his eyes up while dribbling and spots Da’Monte Williams wide open on the wing. He jumps to get a better angle on the pass before delivering a well-placed skip to Williams for a three.

Dosunmu shows off his transition speed here, applying pressure on the Badger defense. He’s able to hang in the air long enough and draw in Micah Potter, that Cockburn winds up being open. Just before he lands, he drops it off to Cockburn for a dunk. This requires a certain level of athleticism and length that not all players have.

While this pass may look simple, it’s actually a complex read and a tough pass. Micah Potter hedges this ball-screen hard, pushing Dosunmu out to well beyond the three-point line. Dosunmu picks up his dribble but instead of throwing it right away, he pauses. This allows Cockburn to seal off Potter as Aleem Ford retreats to Grandison in the corner. Then Dosunmu delivers the ball perfectly over the defense in what was a far pass, and Cockburn slams it home.

Another instance of Dosunmu calculating his decision before the ball even touches his hand. He sees Bezhanishvili cutting behind the defense, takes one dribble and drops in a strike to the cutter.

Dosunmu makes two great passes here. The live-dribble pass with the left-hand is an incredibly difficult one that creates an open three. Grandison missed, but Dosunmu bolts in for the rebound. As soon as he grabs it, he knows Grandison is open so he fires the ball with velocity instantly, not allowing the defense to catch up.

While this wasn’t the flashiest pass, this, to me, was Dosunmu’s best pass of the day and shows his maturation as a passer. He comes off the ball-screen and has his eyes locked in on Trever Anderson (No.12) and Frazier. He sees Anderson sinking to tag Cockburn’s roll, so without hesitation, fires a bullet to Frazier right in his shooting pocket for a three. It’s an incredible understanding of the defense in just seconds. Dosunmu of old may have picked up his dribble and had to take a longer time to think about his next pass, which would allow the defense to reset. But on Saturday, Dosunmu made all the right reads in a timely fashion.