Amid scheduling changes, Illinois looks set to take on Nebraska 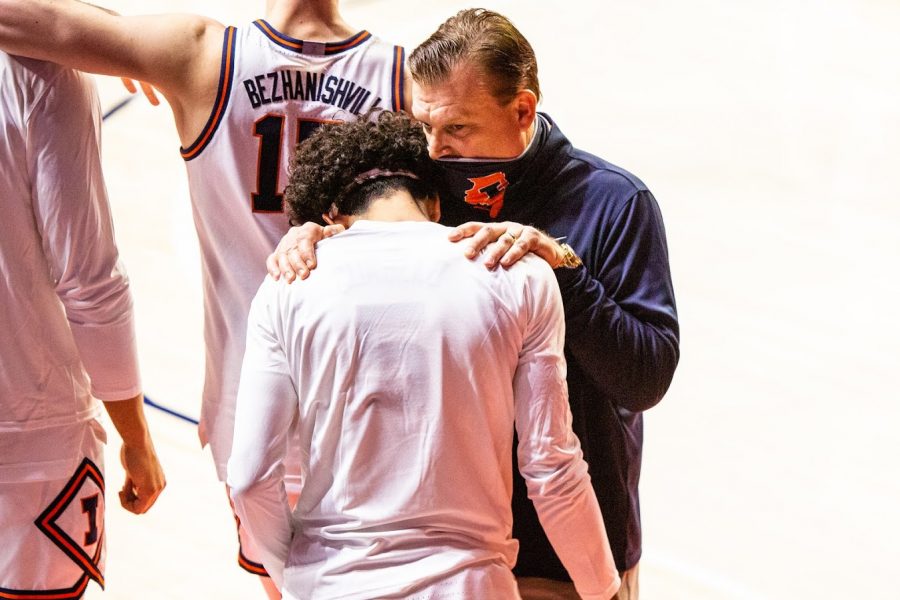 Illinois head coach Brad Underwood speaks with one of his players during the game against Wisconsin on Saturday. Illinois was set to face Michigan yesterday, but the game was postponed.

Thursday, Feb. 11, was supposed to be the date of one of the biggest games on the Illinois schedule. The No. 6 Illini were scheduled to travel to Ann Arbor to face the No. 3 Michigan Wolverines.

But instead of planning for the Wolverines or taking a walk around Ann Arbor, as he frequently does before games, head coach Brad Underwood sat in the Ubben Basketball Complex fielding questions from reporters. After a two-week hiatus due to coronavirus issues in the Michigan athletic department, the Wolverines postponed Thursday’s game against the Illini.

This raised some eyebrows, particularly among fans, considering Michigan had been cleared to play and had zero confirmed cases in the program. The Michigan women’s team, who spent the same time on pause, is playing on Thursday. Underwood confirmed he was not involved in the postponement of the game.

“I wasn’t involved. I’m just deferring everything to the league office and showing up when they tell us to show up and play,” Underwood said. “We knew it was going to be a different year, a challenging year. Sometimes an unfair year, I don’t know if everybody will get to 20 games. I’m not gonna worry about any of that, just gonna show up and play when they tell us to.”

The cancellation of the Thursday game freed Illinois’ schedule for the entire week. They used this availability to reschedule a previously postponed game with Nebraska for Friday. The Cornhuskers missed a handful of games due to COVID concerns. Illinois also rescheduled a previous game at Michigan State for Feb. 23. This kind of uncertainty about who the Illini are playing next can be problematic for the coaching staff.

“It’s harder for coaches,” Underwood said. “After the Wisconsin game, my staff didn’t know who to go to work on, and we didn’t know until Monday night. … I tend to like to know when things are, and when you can’t plan, that frustrates me.”

On Monday, the Illini and Cornhuskers officially scheduled the game for Friday, giving each team a few days to prepare. The Cornhuskers are 4-11 and 0-8 in Big Ten play. They’re in the midst of playing eight games in a 14-day stretch. Illinois is looking for their fifth straight win coming off a home victory over Wisconsin.

The game is scheduled for 8 p.m. central time on Friday night and can be watched on the Big Ten Network.