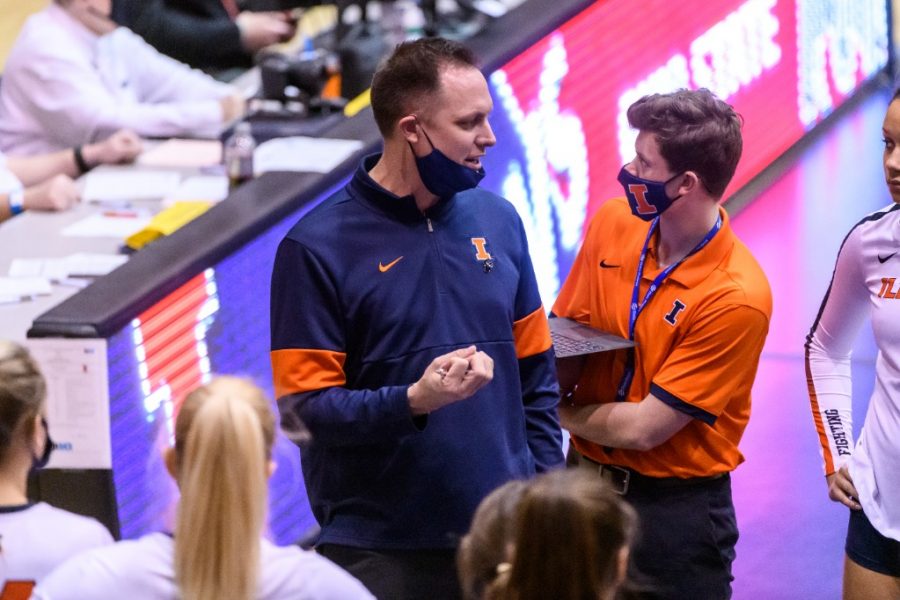 Illinois head coach Chris Tamas speaks to his team during a time out at the match against Ohio State on Friday. The team now has a 2-6 record.

With Friday’s and Saturday’s losses to Ohio State, head coach Chris Tamas is facing a new challenge he hasn’t seen much during his time at Illinois: how to handle losing. Throughout his three seasons at Illinois, Tamas has never posted a losing record, but now the Illini sit precariously at 2-6. Illinois has now dropped six matches in a row, the longest losing streak Tamas has seen in his time at the helm.

Heading into the season, it was clear that Illinois would look different with a revamped roster, but all eyes were looking toward avenging the team’s first-round loss in the NCAA tournament last season. Now, the goal seems to have shifted towards finding stability.

“They’re frustrated,” Tamas said. “Everyone wants to win. I don’t know anyone that doesn’t want to win. We’ve got that fine line of wanting it really bad and just relaxing enough to be in that competitive zone and still execute at a high level and not feel like we have to do more than what’s necessary. We’ve talked a lot about getting a lot of good out there and not having to play perfect. Once you feel like you have to do that, you get a little bit tight and do some less-than-ideal plays.”

In Friday night’s 3-1 loss to the Buckeyes, the Illini fell into many of the same pitfalls they’ve faced this season.  All three of their set losses — 25-17 in the first, 25-17 in the third and 25-22 in the fourth set — were within striking distance of winning, but Illinois wasn’t able to do enough to get the job done.

Friday’s loss may mark the lowest point of Tamas’ time as head coach. After the match, the team had a private meeting that supposedly reinvigorated the team’s rapport for one another, according to freshman Raina Terry.

“I think after our game today, especially, we are really driven,” said Terry regarding Saturday’s 3-2 loss to Ohio State. “We shared today that we really care for each other and that we are going to play for each other and lay everything on the line for each other. I think it’s going to be exciting to get back in the gym next week and the rest of the season and work toward that same goal of playing for each other and with each other, and mentally we’re ready to just get at it.”

On Saturday, the Illini did show significantly more fight, winning two matches and keeping the fifth match close. The effort wasn’t enough to come away with a win, but it did show some proof of life from Illinois.

Over the weekend, Terry had her best two matches of the season back-to-back. On Friday, she set a career high in kills with 14, and on Saturday she smashed it again with 19. On top of the raw numbers, she’s been incredibly efficient, hitting .286 on Friday and .283 on Saturday.

Though Illinois may be struggling this season, their future at the hitter positions looks bright with Terry starting to play like a star and redshirt freshman Ellie Holzman hopefully returning healthy next season.

“(Terry’s) been improving every week,” Tamas said. “She started the season a little bit slow coming off some illness. Every week she’s getting stronger. She’s done well to improve her shots and cause a lot of havoc on defenses out there. She’s showing a lot especially for a young age. She’s playing six rotations on top of that, which is really tough to do. I’m really proud of what she’s doing right now.”

Among other standout performers were Megan Cooney and Taylor Kuper. Cooney had 10 kills on Friday and 15 on Saturday, while Kuper had 23 digs both Friday and Saturday.

The team has displayed some growth through the season. When the Illini went to a fifth set on Saturday, there seemed to be a bit more poise than they had when they went five sets against Penn State.

“We weren’t really thinking of the end of the game or anything,” Terry said. “It was point by point and having each other’s back and giving it everything we’ve got for each other.”

Illinois will get a chance to right the ship and end their losing streak at Michigan State next Saturday.