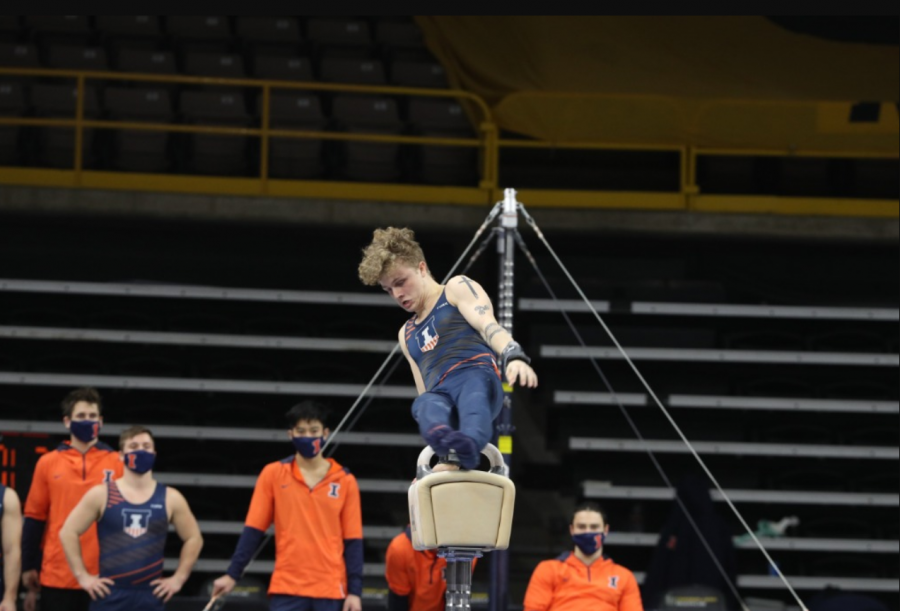 Freshman Logan Meyers performs his pommel horse routine during the meet against Iowa on Feb. 13. Illinois split the tri-meet against Michigan and Nebraska on Sunday.

Almost one year ago, Illinois’ men’s gymnastics team honored its Class of 2020 with a Senior Day ceremony that retroactively can be considered “traditional.” Huff Hall was full of applauding fans as each gymnast was introduced with his parents at their sides and as they approached head coach Justin Spring and Josh Whitman for a hug.

On Sunday, the Class of 2021 — Max Diab, Joel Diaz, Danny Graham, Jordan Kovach and Tommy Mistretta — had no one but their teammates and coaches to celebrate their careers with. Missing were the fans and so were their parents, and each gymnast had to settle for a fist bump from Spring and Whitman, signs of the COVID times.

With the split result, Illinois’ record stands at 2-3 in Big Ten competition.

The 405.550 the Illini put up on Sunday is a five-point improvement over the score they put up against Iowa the previous weekend, which Spring called “a big step in the right direction.”

“We had some positives on floor, rings was pretty good, vault was solid, high bar was about where we should be right now,” Spring said. “But we still had some meltdown areas that I just can’t get a grip on. We got to be better on pommel horse and parallel bars. That’s been the song all year. If we get our pommel horse and parallel bars in the right area, we could be a 412-plus team.”

Michigan was a force to be reckoned with during the meet and easily proved themselves to be one of the best teams in the country. The Wolverines outscored both Illinois and Nebraska in five out of six events, and sophomore Paul Juda won four event titles on his own while sharing a fifth with teammate Cameron Bock. Michigan’s score of 413.300 is the highest score any team other than Oklahoma has achieved this season.

Nebraska was also competitive, outscoring Illinois and Michigan on vault, where freshman Taylor Christopulos, ranked No. 2 in the event, claimed an event title. On three events, the Cornhuskers’ team score was less than a quarter of a point away from matching the Illini’s team score, and on pommel horse, the teams’ scores were exactly the same. But a poor performance on still rings, including three falls during dismounts, and those less-than-one-point margins were enough for Illinois to walk away with the victory over Nebraska.

“Nebraska was like how we were last week. They got crushed by the judges,” Spring said. “Their rings was a little rough, which is really uncharacteristic. That’s three points right there and if they (stick the landings), suddenly they’re right on our heels. Nebraska is absolutely an opponent to be worried about in the postseason, but as they’re going to improve and get better, so will we and hopefully we can maintain this four-point cushion and extend it.”

Illinois, meanwhile, saw all six of its team scores place second, with its scores on floor exercise (70.300) and vault (71.250) being season highs. Junior all-arounder Hamish Carter claimed the high bar title with a season-high score of 14.400, just five one-hundredths of a point away from tying his career-high. He also scored a career-best 14.000 on parallel bars, good enough for third place behind Juda and Bock, and was Illinois’ highest-scoring gymnast in that event plus pommel horse.

Sophomore Evan Manivong missed a share of the vault title by just five one-hundredths of a point while also setting a career-high score on floor exercise. Fellow sophomore Connor McCool would place third on floor exercise as Illinois’ highest-scoring gymnast in that event. On still rings, Graham placed third, also placing behind Juda and Bock in that event.

In the week since the Iowa meet, Graham and Kovach noticed a shift in the team’s mentality, and the team carried that improved mentality into Sunday’s meet.

“For the Iowa meet, our mentality was like ‘Just hit the routine,’” Graham described. “Now we’re not just trying to hit it, we’re trying to perfect it and show it off, and that showed up. We looked a lot better than we did last week.”

All five seniors got to compete on Sunday in their final meet in Huff Hall. Going into the meet, Kovach wasn’t focused on that fact, but after it was over, he couldn’t escape reality.

“To me, it was just another competition. Since we’re done, it’s hitting me that this is going to be my last time (competing in Huff Hall),” Kovach said. “It’s sad, but I’m glad we went out and had a pretty decent meet. I can’t complain too much. I’m going to miss (Huff) for sure.”

“I was trying to enjoy it as much as possible,” Graham said. “It’s definitely a sentimental moment, but there’s a lot more of the season left to go. I think it was a great senior night, given the circumstances.”

While those circumstances wouldn’t permit the seniors’ parents to be physically present in Huff Hall, the parents were there via a surprise video presentation to their sons. According to Graham and Kovach, their parents left them messages of congratulations for their accomplishments, encouragement for for the meet, and stating how proud they were.

“I told myself that I wasn’t going to get emotional or anything, but as soon as I saw it, it kind of hit me,” Kovach said. “That was a great thing to see. I loved every bit of it.”

Graham also found himself a little emotional upon seeing the video.

“This is a group of fighters and a group that really carries the spirit of the team and we’re going to be weighing on them,” Spring said of the seniors. “I’m looking forward to them towing the line of team spirit over the next few weeks of training and finishing off the season. It’s one for the record books, given how tough this season has been and what these guys have been through.”