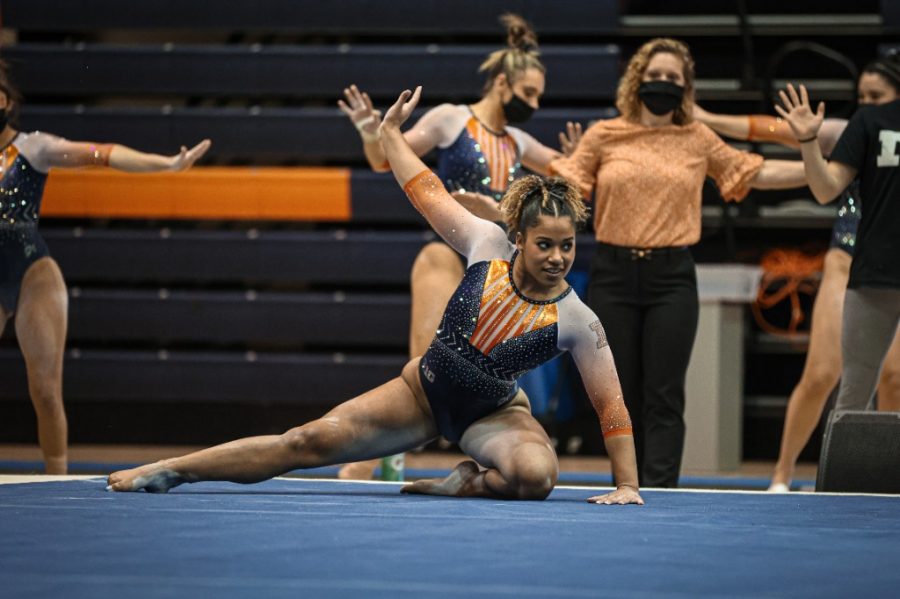 Sophomore Mia Townes performs her floor exercise routine during the meet against Michigan on Sunday. The Illinois women’s gymnastics team placed second in the Big Five Meet on Friday.

For the second consecutive year, the Illinois women’s gymnastics team placed second in the Big Five Meet, coming behind Minnesota.

Illinois finished with a score of 196.600, its second highest score of the season. After never exceeding the 196.600-point mark in 16 meets last year, the Illini have already done it twice this season; the first time was against Michigan on Sunday.

On bars, the Illini set a season-high with a score of 49.250. Junior Mallory Mizuki set a career-high in the event with a 9.925, which was the third best score across all five programs at the meet.

After achieving a season best on bars, the Illini moved to beam and set another season record, scoring a 49.250. Sophomore Mia Takekawa, who is ranked 19th in the country on beam, led the team with a 9.900, and she tied for second place overall in the event.

Sophomore Mia Townes set a personal best on floor with a score of 9.900, finishing in joint second place individually.

On vault, Townes tied a career best and finished fourth individually with a score of 9.850, while senior Nicole Biondi scored a 9.825 to cap off her all-around score at 39.250. Biondi finished in fourth place out of six gymnasts, an individual improvement after she finished fifth last year.

As a team, the Illini finished second in every event, coming behind the Golden Gophers in beam, bars, floor and vault.

Illinois has seven days off before its next meet, as it will travel to Iowa City to take on Iowa for the second time this season on March 6. The Illini will look to avenge the 196.325-195.600 loss they suffered at Huff Hall on Jan. 31.