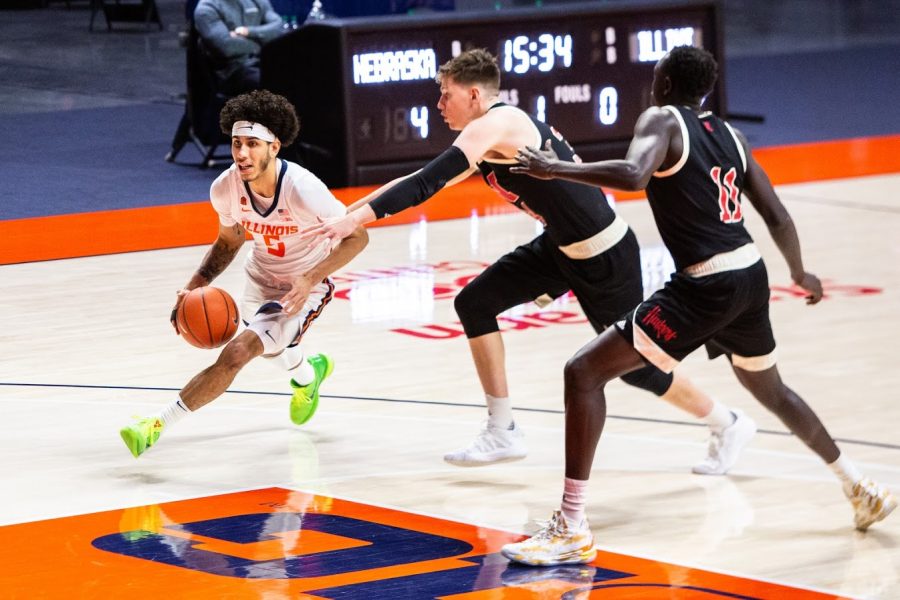 Freshman Andre Curbelo pushes down the court during the game against Nebraska on Thursday. The Illini won the game 86-70.

Coming off a tough loss against unranked Michigan State and without their National Player of the Year candidate, the Illini were going to need production from all areas to take down a Nebraska team that forced Illinois into overtime during their last meeting. Brad Underwood’s squad faced the challenge head-on, and convincingly took down the Cornhuskers on senior night.

Illini fans got a glimpse of what Illinois basketball will look like with Adam Miller and Andre Curbelo in control, and it’s safe to say it’s a pretty sight. Big outings from the freshmen, along with a dominant showing from Kofi Cockburn, helped fill Ayo Dosunmu’s 21-point void.

While almost the entire Illini bench saw action against the Cornhuskers, I graded the six players who saw the majority of the minutes on Thursday.

Illini fans were reminded on Thursday night why Miller was such a sought-after recruit in his Morgan Park days. With Dosunmu in the lineup, Miller is typically used as a spot-up shooter and while he can hit those shots, Miller is much more multi-dimensional. And, with Dosunmu on the bench, Miller showcased his other talents.

While both teams got off to a rough start offensively, Miller started to break things open in the last five minutes of the first half. Around the 7-minute mark, Miller drained the Illini’s first 3-pointer of the game, and he went on a personal 7-0 run just two minutes later. First, he hit a reversal layup off a dribble handoff, then he hit a three from the wing and finished off the run with a left-handed dunk off a baseline drive.

Miller was pretty quiet the rest of the game, finishing with 18 points — a season-high in conference play — on 8-15 shooting, but it was nice to see the freshman gain confidence in his shooting and driving abilities at the collegiate level.

It’s hard to put into words what Frazier has done for this Illini program. From a player John Groce recruited who had to carry the Illini offense his freshman year to one of the best lockdown defenders in the league, Frazier has paid his dues to the Illinois program. And on senior night, Frazier did what he does best and limited Nebraska’s top scorer — Teddy Allen — to five points on 2-6 shooting.

Offensively, not much was going for Frazier, who had been a consistent threat over the last few games. Frazier put up just seven points and was 1-7 from 3-point range. Obviously, Illinois didn’t need Frazier’s production to win, and it’s not really a concern, as he typically steps up in big moments.

Along with Frazier, Williams — who was a part of Underwood’s first recruiting class — has put his all into turning this Illini program around. Williams has also turned into an elite defender during his time at Illinois, and that was on full display on Senior Night. The Peoria native recorded a season-high four steals, along with a team second-best seven rebounds and a block.

Williams was still able to contribute offensively, putting up eight points on 3-7 shooting and dishing out two assists. The senior earned the start on Thursday after coming off the bench the last eight games and will most likely continue on that path until Dosunmu returns.

No matter if Williams is a starter or not, though, he has been a key piece to the Illini’s defensive identity and has been a great role model for the freshmen.

Grandison is another Illini role player who stepped up with Dosunmu out. While he was pretty quiet in the first half — scoring four points on four free throws — Grandison found his groove late in the game, scoring 10 second-half points on 4-6 shooting.

While his 3-point shot has been one of his best assets lately, Grandison was 0-2 from deep against Nebraska, but he still found ways to score. Grandison was aggressive on the boards all night, grabbing seven rebounds, including a team-high four offensive rebounds. This energy allowed Grandison to capitalize on putbacks and draw fouls, as he shot seven free throws, making six.

To start the game on Thursday night, it was clear Nebraska was going to hound Cockburn all night, and it succeeded in the first half. Cockburn picked up two fouls, including a technical, and had just six points on three shot attempts. But the Illini big came out of halftime an entirely different player, scoring 18 points in the final 20 minutes.

Cockburn looked like the strong 7-foot center he is and took control of the paint on both ends of the floor, limiting Nebraska to just 12 second-half points in the paint. The Illini big also improved on the free-throw line, shooting 8-10 after going 3-11 from the line against Michigan State.

And Cockburn had Illinois’ best dunk of the season:

Curbelo was just two assists away from achieving a triple-double on Thursday night, highlighting why the future of Illinois basketball is in good hands. The Illini freshman has been inconsistent throughout the season, but Curbelo brought his A-game when Underwood needed him the most, finishing the night with 10 points, 12 rebounds and eight assists.

While Curbelo was aware of his stats near the end of the game, he told reporters in the postgame press conference he wasn’t upset about not hitting the achievement. To the Illini freshman, the most important thing is getting his teammates involved and searching for the open look, not the stats.

Regardless, Curbelo had his most complete performance of the season, as he looked extremely confident on the court, even when put in as a starter in the second half. However, Curbelo’s main issue is still turnovers, as the freshman recorded five against the Cornhuskers.