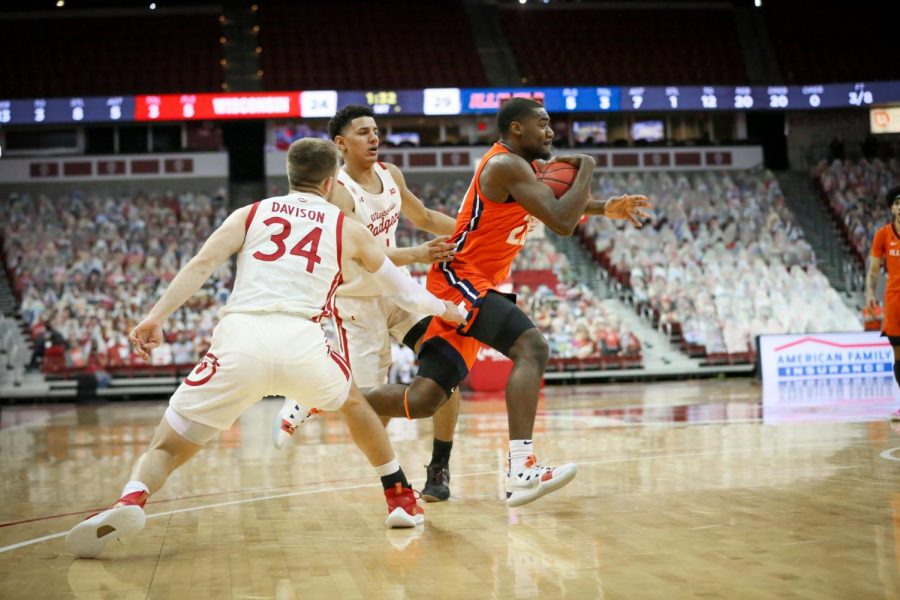 It’s not often the No. 5 team in the nation heads into a game against the No. 23 team in the country — which it already beat once — as underdogs. But without Illinois’ star player for the second game in a row and in Wisconsin’s home territory, Brad Underwood’s squad wasn’t favored to leave Madison victorious.

Behind tight, disciplined defense and a balanced offense — all eight players who saw minutes putting up points — Illinois complete the sweep of Wisconsin with a 74-69 win Saturday afternoon.

“It shows we’ve got really good players who have a lot of charisma, a lot of ability, that have stepped up in adverse situations,” Underwood said. “To be honest, I couldn’t be prouder. They’re gritty, they’re tough and it’s just another step in our culture. And to do it without Ayo, the best player in college basketball, and have players step into new roles…. I’m just proud as anybody can be.”

While Illinois led from start to finish, Wisconsin senior D’Mitrik Trice nearly spoiled the win with his Dosunmu-like late-game heroics. The Illini led by 12 with 2:25 left in the game, but Trice scored 19 points on five 3-pointers in the final stretch to put Illinois to the ultimate test.

Instead of folding without their leader on the court, the Illini won the game at the free-throw line as Trent Frazier and Andre Curbelo each hit four free throws and Jacob Grandison hit two to seal the game.

“I’ve seen those guys make 30-50 free throws in a row every day, so that’s really nothing new,” Williams said. “Them just going up, taking their time and just knocking them down.”

In that seven-minute span, Illinois’ defense forced 11 straight misses from Wisconsin, including four 3-pointers. Illinois extended its lead as far as 22-10, but six turnovers in five minutes from the Illini gave the Badgers a window to come back.

While Illinois’ defense kept badgering Wisconsin into tough shots – limiting them to 27% shooting in the first-half — the Illini committed six more turnovers, keeping them from running away with the lead.

“They just took our ball,” Underwood said. “Give them credit, they had a week to prepare. They did a great job of jumping out really hard and switching. You’ve got to find a way and we’ll clean those up. And I think that’s a little bit of the challenge with Ayo out.”

With a 37-26 lead, the Illini came out of the break with a better handle on the ball, but couldn’t get back into a scoring rhythm, going 2-11 seven minutes into the half. But a Cockburn dunk sparked some fire as Grandison, Curbelo and Miller all knocked down jump shots to create a 51-38 lead with eight minutes to go.

Then Trice made his run, shrinking the Illini’s lead to four points with 1:30 to go. Williams — who finished with 12 points — wouldn’t let Trice win, however,  nailing a long two to set up the win.

“We’re seeing the Da’Monte we see in practice; we’re seeing his whole bag of tricks,” Underwood said. “He’s a huge part of this team and his activity today was perfect and his energy was great. Not just what he did on the offensive side but on the glass and defensively as well.”

Illinois will get a much-needed day off before heading back on the road Tuesday for arguably the most important game of the year at No. 3 Michigan.