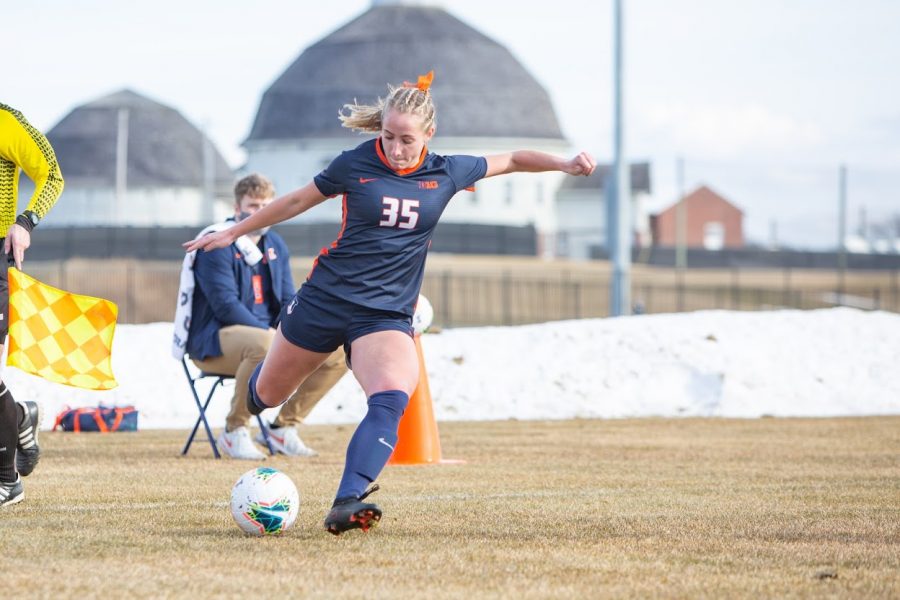 Junior Lauren Stibich moves the ball forward during the game against Iowa on Friday. The team lost to Penn State 2-0 on Sunday.

Heading into the game against Penn State, the Illinois soccer team was on top of the Big Ten conference table with two wins under its belt. At the half-constructed Demirjian Park, the Illini suffered their first defeat of the season, falling to the Nittany Lions, 2-0.

The Illini were the underdogs during the match, but despite of the loss, they played a strong and hard-fought game.

Every player or coach you talk to, they say the first five minutes are the most crucial in a game. It can decide the momentum of the game and who will lead.

Though Illinois kicked off to start the first half, Penn State was quickly able to take possession and control the first five minutes.

Build-up play from the Nittany Lions lead them to the top of the box, where Sam Coffey hit a first-time shot past goalkeeper Sami Sample to put them up 1-0 after just three and a half minutes.

Even one goal down, Illinois knew they were still in the game and began their hunt for a response to Penn State’s opener.

Illinois’ reply was to apply pressure and get into Penn State’s defensive half. They did just that with the help of defender Kendra Pasquale booting it up for forward Makena Silber.

That move forced Penn State to give away two corners in a row to the Illini. Freshman defender Joanna Verzosa-Dolezal’s shot got deflected for a corner, midfielder Hope Breslin almost curled it into the goal from the corner and the ensuing volley from midfielder Maggie Hillman sailed over the goal.

“That’s one of the things I’m proud of,” Rayfield said. “I’m proud of the way we responded to that, even their second goal.”

The remainder of the half saw the Illini battle with the Nittany Lions for a shot on goal, which they had, but the finishing touch was missing.

In the second half, the Illini had the first chance, with Breslin cutting past her defender twice to get an open shot and path to goal. The shot from her dominant foot led Penn State goalkeeper Katherine Asman to make a strong save over the crossbar for a corner.

Several minutes after that chance, in the 52nd minute, Illinois lost the ball in a dangerous territory, which Penn State took full advantage of. The Nittany Lions took a shot on goal and while Sample tried to save it, the ball hit off the post and went into goal, making the score 2-0.

Now down by two, the Illini kept fighting for a consolation goal. Chance after chance, but and nothing came of it.

In the 74th minute, Illinois almost went down three goals after a foul in the box gave Penn State a penalty kick.

Coffey stepped up and aimed it for the bottom right corner. Sample dove for the ball and came out on top, making a huge save for the Illini.

The game finished 2-0 to Penn State, giving Illinois its first loss of the season.

“Obviously, not the greatest result, not the one we wanted, but (Rayfield) is still proud of us,” Breslin said. “I think going into every game with a mentality that we’re going to win, we’re better than this team, we can do it. Just having that competitive mentality all the time that will really set the mindset and the tone.”

Illinois’s next game will see them travel on the road for the first time, as they will face Wisconsin. The Badgers are another tough team in the Big Ten, as they won the conference in 2019.