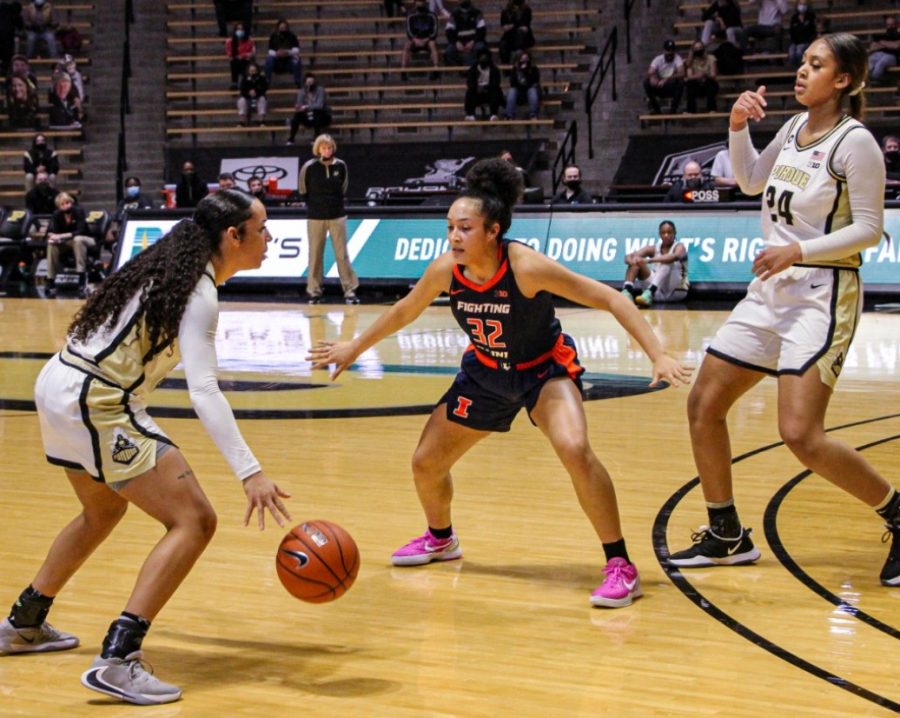 Freshman Aaliyah Nye defends during the game against Penn State on Sunday. Illinois lost the game 70-66.

Illinois previously defeated Purdue Feb. 7, 54-49. Illinois won the game in the final minute, going on a 7-0 run in the last 60 seconds to close that game.

“The disappointing part of it is that we’ve got ourselves in a hole in the third quarter,” said head coach Nancy Fahey. “I thought, first half — we played pretty soundly. We had good shots — not necessarily all of them fell — but (we) have to really take care of the ball.”

The Illini had a strong start, going without a turnover until 2:33 to go in the first quarter. In that time, Illinois was able to take a 11-9 lead.

Purdue also fouled several times, and junior center Eva Rubin led the team with five points in the first 10 minutes — three of which came from the free throw line. But, Rubin picked up two fouls in the first quarter and was subbed out.

The Illini closed out the first quarter with a 2:04 scoring drought, during which time Purdue went on a 4-0 run. A buzzer-beating 3-pointer from Moore gave the Boilermakers a two-point lead, 13-11, entering the second quarter.

Illinois opened up the second quarter responding to Moore’s three with one of their own. Sophomore forward Solape Amusan scored her first 3-pointer of the quarter to give Illinois a 14-13 lead.

Purdue took a 17-14 lead with 6:49 left in the second quarter, and then Illinois went on a 8-0 run, consisting of back-to-back 3-pointers from freshman guard Aaliyah McQueen and a 2-pointer by sophomore forward Kennedi Myles.

After the second quarter media timeout, Illinois’ momentum slowed, and Purdue tied the game with 4:37 left in the half.

Freshman forward Erika Porter made a layup with 2:30 left in the first half, but Purdue went on a 5-0 run to close out the first half to take a 29-27 lead. Both teams scored 16 points in the second 10 minutes, so Illinois entered both the second and third quarters with a two-point deficit.

12 of Illinois’ 16 second-quarter points came from behind the 3-point line, and both Amusan and McQueen had two triples. With six points each, they were tied for the most points in the first half for the Illini.

Illinois opened up the third quarter with a jumper from Peebles to tie the game, but the rest of the quarter went in Purdue’s favor.

A jumpshot by sophomore guard Jeanae Terry gave Illinois a one-point lead, but Purdue went on a massive run following Terry’s basket. The 12-0 run would culminate to a double-digit deficit for the Illini, and Purdue climbed to a 44-33 lead during a nearly four-minute Illinois scoring drought.

A Rubin layup ended the scoring drought, and Peebles made a jumper before a Keyana Traylor 3-pointer pushed Purdue’s lead back to double digits. At one point, Illinois cut Purdue’s lead to single digits, but the Boilermakers climbed to a 56-40 lead soon after. At that time, Purdue had scored 16 points off turnovers.

The Illini closed out the third quarter with a nearly four-minute stretch of not scoring any field goals. Illinois scored three points, all of which were Rubin free throws. Rubin also picked up an additional two fouls in the third and subsequently sat out the fourth quarter.

The last ten minutes resembled the first time the teams played, as Illinois made another comeback. Unlike the last game, however, it fell short for the Illini.

The Illini were able to capitalize on a five-minute Purdue scoring drought, cutting Purdue’s lead to three, 58-55, with under five minutes to go in the game.

With 46.3 seconds left in the game, Lopes made two free throws to cut Purdue’s lead to one. A Traylor free throw with 20 seconds left gave the Boilermakers a one-bucket lead.

Illinois wasn’t able to capitalize on it, and a Lopes foul, and Traylor’s subsequent free throws, sealed the game.

Despite the comeback falling short for the second consecutive game, Peebles felt the team had a strong performance.

“Typically, with our games, there’s always one quarter that kills us,” Peebles said. “Overall, I think we played a good game. Some of our shots were off, but I still think that we (pushed) through, and we had a good game today.”