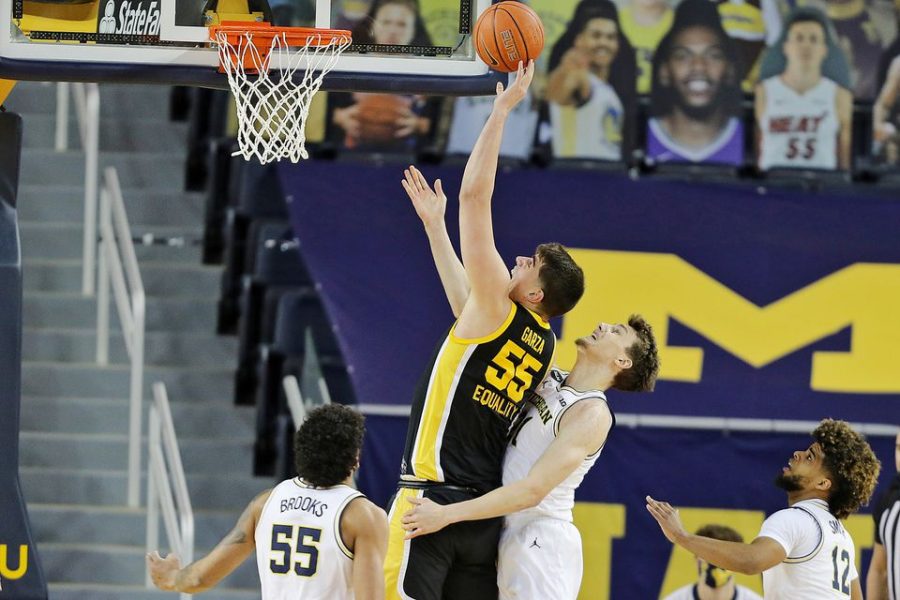 Iowa center Luka Garza goes up for a shot against Michigan guard Franz Wagner in the first half of their Big Ten basketball game at Crisler Center in Ann Arbor on Thursday.

The Big Ten men’s basketball regular season is just a week away from wrapping up. As of now, Michigan will bring the conference trophy back to Ann Arbor, as they sit atop the Big Ten at 13-1 while Illinois trails behind at 14-4.

Some of the best matchups are yet to come, however, as No. 3 Michigan hosts No. 5 Illinois Tuesday, Michigan State travels to Michigan Thursday, No. 4 Ohio State host Illinois Saturday and No. 9 Iowa hosts No. 23 Wisconsin Sunday.

With so many games with major Big Ten and national tournament seeding implications left to play, it’s hard to tell how the conference will shake out in the final weeks of college basketball. In the meantime, let’s take a dive into two of the biggest questions in the conference right now.

Should teams like Indiana, Minnesota, Michigan State and Maryland make the NCAA tournament?

Any person who follows college basketball to the slightest extent knows the saying, “the Big Ten is just so deep.” While that statement may be overused and exaggerated at times, the conference is full of good competition. But does that mean the middle-of-the-conference teams should be more strongly considered for March Madness qualification?

Right now Indiana, Minnesota, Michigan State and Maryland are all considered bubble teams for the NCAA tournament. While each program has a losing conference record — ranging from one game to six games — each team has an overall record of .500 or above.

Over the weekend, it seemed like Indiana and Minnesota each lost their chances at the tournament. The Golden Gophers lost at Nebraska — the worst team in the Big Ten — on Saturday, extending their five-game losing streak. This also included a loss to Northwestern, another conference bottom-feeder. While the Hoosiers had a hot streak a few weeks back, beating Iowa twice, they are on a three-game losing streak, most recently falling to Michigan Saturday. As of now, both mid-tier programs shouldn’t make March Madness.

Michigan State and Maryland, however, are each making late-season pushes. After losing four straight games midseason, Tom Izzo’s Spartans have beaten two top-five teams in Illinois and Ohio State over the past week, but they still have to play Michigan twice in the final week. If they can split the series, they will make the tournament. The Terrapins have won four straight, but all against mid-tier teams. If they can win out in the final three games, that would also put them in the tournament.

Can Ayo still win Big Ten Player of the Year?

The Illini’s star player has missed the team’s last two games against Nebraska and Wisconsin due to an injury suffered at Michigan State last Tuesday. While Illinois has faired well without Ayo Dosunmu, it would be a major upgrade to have him back for Michigan and Ohio State, two of the best teams in the country.

With Dosunmu making a strong case for Big Ten Player of the Year over Iowa’s Luka Garza, I wonder how much his two or more absences will hinder his chances of the award. Right now, I would say Dosunmu deserves it more than Garza. While the Hawkeyes center averages more points (24.3) compared to Dosunmu’s 21 points per game, the Illini junior is arguably the most complete player in college basketball, as he averages 6.3 rebounds and 5.3 assists per game. The star guard has also recorded two triple-doubles this season.

What makes Dosunmu so special is the ice in his veins. He rarely, if ever, lets a win slip away from his team and commands one of the best offenses in the Big Ten. While Garza can also take over a game and is the center of Iowa’s offense, he isn’t really tasked with the high-pressure situations and isn’t always the deciding factor in wins.

While Dosunmu has missed some time with the facial injury, I still think he has done more than enough to prove his worth to everyone in college basketball, and the two games shouldn’t play a role in the Player of the Year decision.