Michigan preview: Defending pick-and-roll offense will be key in showdown with Wolverines 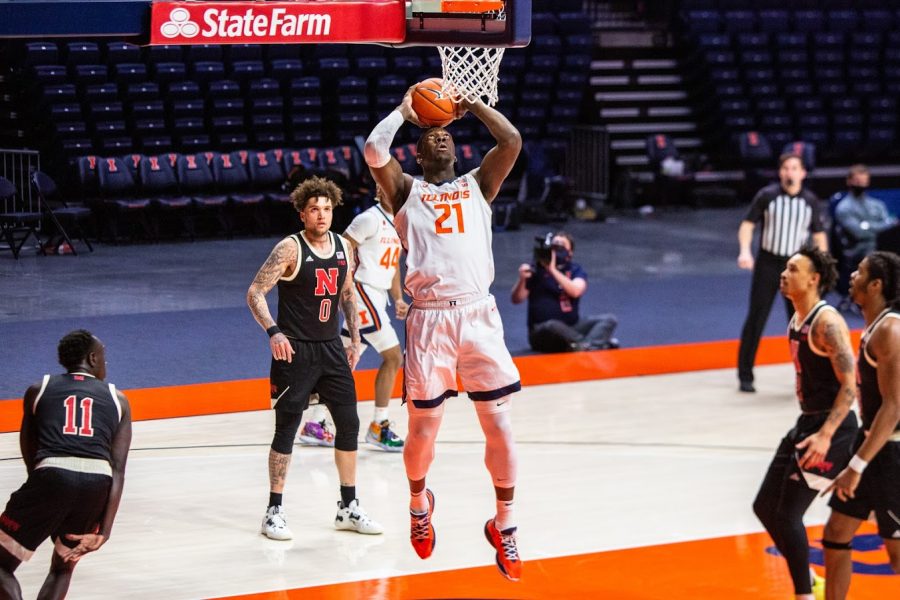 Sophomore Kofi Cockburn goes for the dunk during the game against Nebraska. The Illinois basketball team will face off against Michigan tonight.

It’s not nearly the game everyone anticipated, but nonetheless, Big Ten and college basketball fans will be in for a treat on Tuesday night when No. 4 Illinois goes to No. 2 Michigan.

The game was supposed to take place a few weeks back, but the Wolverines postponed it coming off a Covid pause. At the time, it appeared this may be a battle for first place in the Big Ten, but Michigan has won five straight games since the Covid pause and now hold a three-game lead in the loss column over Illinois. The conference title will likely be decided by win percentage, but unless the Wolverines fall on their face, they should wrap this up.

It’s also unlikely that Ayo Dosunmu plays, as the opening line is -8.5 points. Still, the Illini are 2-0 without him, and if they could pull off the massive upset, a No. 1 seed in the NCAA Tournament is in their hands. Let’s break down some of the biggest questions heading into Tuesday’s game.

How does Illinois defend the pick-and-roll?

Juwan Howard has implemented a pick-and-roll heavy offense with multiple ways to get into it, and there is tons of movement on the weak side to keep opposing teams on their toes at all times. While all five guys will need to be active on defense, whoever is guarding Michigan point guard Mike Smith and center Hunter Dickinson are going to have to work.

Dickinson will almost certainly be guarded by Kofi Cockburn, while I expect Trent Frazier to take on the matchup of Smith. Smith leads the Big Ten in assists per game at 5.2 and also leads the Big Ten in passing out of ball screens, which he does 66% of the time. If Illinois runs drop coverage with Cockburn, they will be daring Smith to score. But Smith can score when needed, getting into double-figures in three of the last four games.

“They’ll put all their guys in ball screens,” Underwood said. “They’re good at it. Big boy Hunter (Dickinson) gives them a different look. He’s a good roller, good hands, he’s 7-foot-1, so it’ll be a big, big part of this ball game.”

Illinois’ help defenders also have to be on their toes. Franz Wagner, Isaiah Livers, Chaundee Brown and Eli Brooks all shoot over 36% from three on solid volume. If Frazier and Cockburn can contain the pick-and-roll, it will make everyone else’s job easier.

Can Cockburn dominate against someone his size?

Dickinson, standing at 7-foot-1, 255 pounds, is one of the few Big Ten bigs taller than Cockburn. Cockburn has a strength advantage, but Dickinson is a smart defender who uses his length wisely. He held Iowa’s Luka Garza to 6-19 shooting last week. For Illinois to complete this upset, Cockburn has to be the best player on the floor. He’ll have to be the offensive hub that Illinois plays through, even if that is just drawing double-teams, as Michigan’s fourth-ranked defense has what it takes to bother Illinois.

Can Illinois score against Michigan’s length?

Teams with length on the wing — Baylor, Rutgers, Maryland — have given Illinois some problems. So, 6-foot-9 forward Franz Wagner is not exactly what Illinois wants to see. Michigan also has Livers (6-foot-7) and Brown (6-foot-5) to throw at Illinois’ shorter guards/wings. They will have to look to attack Smith, who is just 5-foot-11 and the weak link on their defense.

I believe Andre Curbelo is the x-factor on offense. He’s Illinois best creator sans Dosunmu and can get open looks for Adam Miller and Trent Frazier. At his peak, Curbelo has been a passing savant, but if he has six turnovers like he did against Wisconsin, the Illini will be in trouble.

“They are connected. Chemistry,” Underwood said of Michigan’s No. 4 defense. “You can tell they’re a veteran team. They’ve been coached. You can tell they are dialed in at that end. Probably the most important aspect of that is they play really hard.”

There’s a lot of nuance and technical stuff that goes into a basketball game, but at the end of the day, it’s a make or miss game. When you have the two best three-point shooting teams in the Big Ten (Michigan at 39%, Illinois at 38.1%), it may simply come down to which team gets hot and stays out. With a one-seed up for grabs for the Illini, they will need their role players to hit shots if they have any shot of upsetting the Wolverines.