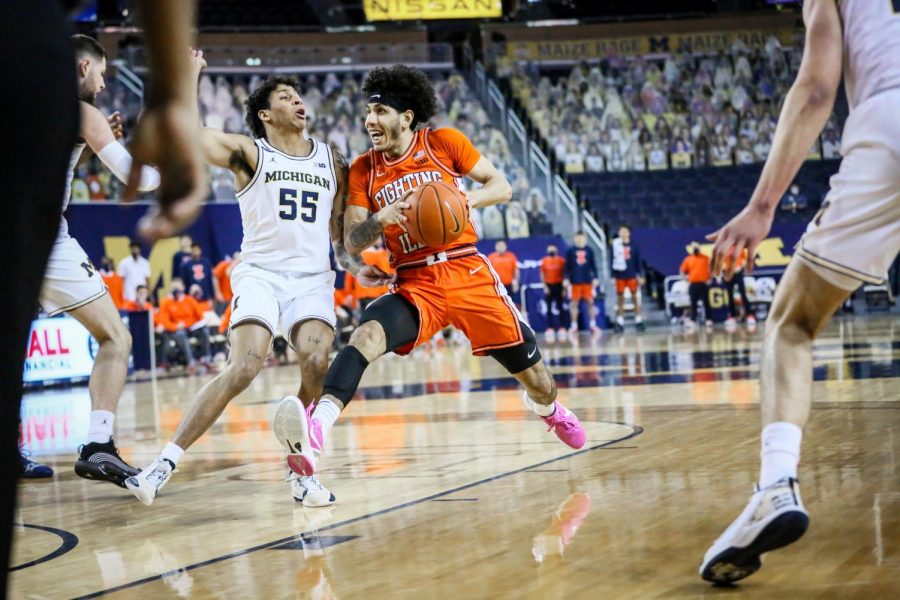 Andre Curbelo drives toward the basket in the first half against Michigan on March 2. The Illini beat the Wolverines, 76-53.

Illinois was supposed to travel to Ann Arbor just under three weeks ago to take on a Michigan squad that had just received clearance to return from a COVID-19 pause. Much to the annoyance of Illini fans across the country, the game was moved to the last week of the season, forcing the Illini to play three ranked opponents in their final three games.

After winning two straight games without Ayo Dosunmu, who sat out after breaking his nose against Michigan State on Feb. 23, the Illini dominated without their star guard once again Tuesday night, taking down the No. 2 Wolverines on the road, 76-53. The win was the Illini’s seventh in program history against a top-2 opponent, while it’s the team’s first since they beat No. 1 Indiana in Champaign in 2013.

Dominant scoring displays from Trent Frazier and Andre Curbelo and dominance on the boards on both ends of the court guided the Illini to the unexpected win. Let’s take a look at seven key Illini performances from the team’s dominant display.

After spending two seasons on below average teams, Frazier exemplifies everything this Illini team represents: passion, determination and grit. The Florida native stepped up once again against the No. 2 Wolverines on Tuesday, scoring 22 points — his third 20+ point performance of the season — on 7-18 shooting, including 2-5 from beyond the arc.

Frazier’s shooting was certainly his standout contribution, but his defense was impressive once again, as he held Michigan guard Mike Smith to five points on 2-6 shooting. His intensity on the defensive end of the court was apparent for all 40 minutes, and he was one of the biggest reasons why the Wolverines attempted just seven 3-pointers — making two — despite averaging over 19 attempts per game.

The Illini needed a big performance from Frazier, and that’s exactly what they got. If Frazier can continue to put together dominant defensive displays while also complementing Dosunmu and Cockburn on offense, beware of this Illinois squad come the Big Ten and NCAA tournaments.

Without Dosunmu, Curbelo is tasked with running and controlling the pace of the offense, and Tuesday’s game was one of his best in an Illini uniform. Curbelo extended his double-digit point streak to four games, as he scored 17 points and grabbed six rebounds.

The Puerto Rico native came off the bench after three minutes and jump-started the Illini offense, opening the scoring with a nice layup before ultimately scoring seven of the team’s first 10 points. Curbelo craftiness was much needed without Dosunmu, and tonight’s performance should give Illini fans plenty of optimism for the future of Illinois basketball.

Turnovers have been an issue for the freshman all season, and after turning the ball over 11 times across the last two games, Curbelo had just two on Tuesday. His decision-making has significantly improved over recent weeks, and though he picked up four fouls, Curbelo looks like a dangerous weapon off the bench for Brad Underwood’s squad.

Michigan’s Hunter Dickinson is one of the few college centers who matches up with Cockburn in terms of height and size. The Jamaica native certainly got the better of the Wolverine freshman, as Cockburn scored 12 points on 6-10 shooting while holding Dickinson — who is averaging almost 15 points per game — to six points on 1-8 shooting.

Though Cockburn got into foul trouble, his defense was intense and made it hard for Dickinson to get any good looks. Austin Davis was able to find a bit more success against Cockburn, as he scored nine points on 4-4 shooting.

Cockburn proved he can do more than just finish alley-oops from Dosunmu or Curbelo, and he needs to bring this defensive intensity in the postseason if the Illini have any shot of putting up a fight against other top teams.

After struggling with his confidence early in the season, Miller has flipped a switch over the last few weeks, as he is finally getting his shots to fall from deep. This improvement was especially apparent on Tuesday when the Peoria native hit a deep three to open up an insurmountable 16-point Illini lead, and he finished with six points on 2-7 shooting, including 2-4 from deep.

Even when his offensive production isn’t top-class, Miller steps up on the defensive end, forcing Wolverine shooters into tough, contested looks. He was also one of the reasons why Michigan took only seven 3-pointers, as he constantly put pressure on the perimeter and essentially eliminated Franz Wagner, Isaiah Livers and Eli Brooks for the entirety of the game.

The freshman guard has found his shooting touch, a trend the Illini will hope continues going into the postseason.

Ever since moving into the starting lineup, Grandison has been a huge asset for the IIlini, as they have gone 8-1 in games he’s started. On Tuesday, the Oakland, California, native scored three points, with the lone basket coming just over two minutes into the second half to open up a double-digit lead, while he also added a season-high five assists.

Though he will never be a huge scoring threat, Grandison brings the intensity on defense and is aggressive on the boards. He grabbed six rebounds on Tuesday, including three on the offensive end, and these offensive boards directly led to six second-chance points. His grit and determination was also apparent when he dove for a loose ball despite the Illini being up by over 20 points, which shows he’s willing to work hard regardless of the score or opponent.

Once Dosunmu returns, it will be interesting to see if Brad Underwood opts to keep Grandison in the lineup or replace him with Williams, who has also put together some impressive displays over the last few weeks.

Williams brought intensity on both ends of the court, as all seven of his points came off second-chance opportunities. His confidence in his shooting has also significantly improved over the last few games, as he’s taken at least six shots in each of the last three games.

Like Miller and Frazier, Williams’ defensive intensity helped limit Michigan’s 3-point shooting threat, and the Wolverines likely would’ve taken more shots from behind the arc if it wasn’t for Williams’ energetic defensive effort.

With Cockburn on the bench for large stretches in both halves, Bezhanishvili was forced to guard Dickinson and Davis, both of whom are bigger and stronger than him. Despite the challenge, the Georgia native had a solid outing, as he also played a big role in holding the Wolverine big men to a combined 15 points.

Bezhanishvili also had a solid offensive performance, as he scored four points on 2-3 shooting, while he also grabbed two offensive rebounds.

It was a pretty typical display for Bezhanishvili on Tuesday, as he played well on both ends of the court, though he still lacks the physicality and size that Cockburn brings to this dominant Illini squad. Though he isn’t Cockburn, Bezhanishvili is a solid replacement for the Jamaica native when he’s on the bench or gets into foul trouble.