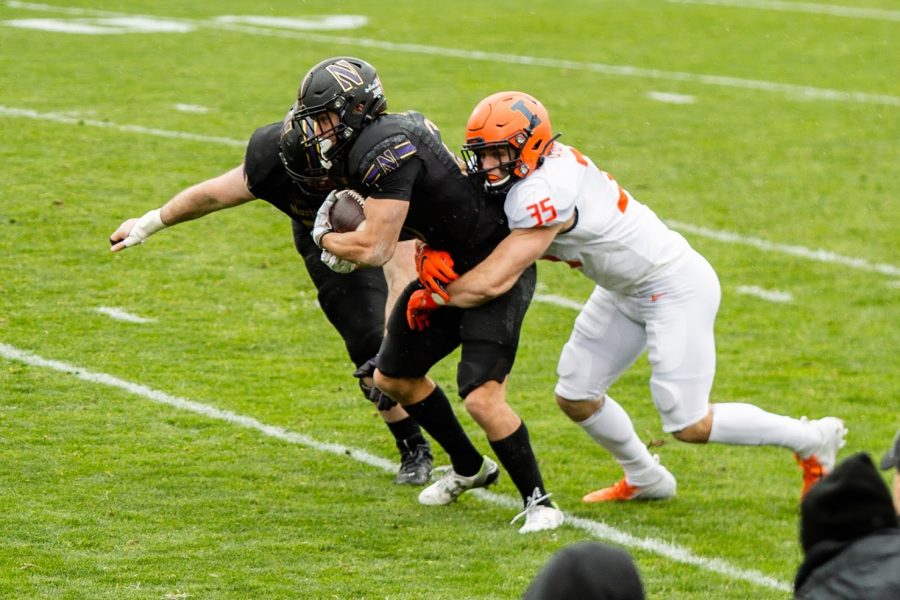 Senior Jake Hansen tackles the opposing ball carrier during the game against Northwestern on Dec. 12. Hansen has decided to return to the Illini for a sixth season.

Five years is a long time in college, and Jake Hansen decided it was best if he passed up the NCAA’s offer for an extra season. It didn’t matter that Bret Bielema sparked new life into the program. It didn’t matter that a sixth season would be a likely return to normalcy. The King of Forced Fumbles thought it was time for the NFL.

Hansen went through all of the basic protocol when declaring for the draft, and he signed an agent, a perceived move that usually ends all possibilities of coming back to college if he changed his mind.

But as the months passed, Hansen would check on his Champaign-Urbana friends and noticed the energy boost Bielema gave them. Whether it was the new offensive and defensive schemes, Hansen’s teammates who took the extra year seemed all in, and he wanted a part in it, too.

After successful talks with Bielema and being granted a waiver by the NCAA, Jake Hansen is ready to don the Illini jersey once more to complete unfinished business.

“I was never a first-team All-Big Ten guy,” Hansen said. “We never played in a Big Ten championship. Those are things I wanted to do. After talks with Coach Bielema, those are things that are very possible with him.”

While Bielema is trying to turn around Illinois’ fortunes with high school recruits, securing Hansen is just another drop in the bucket when convincing Lovie Smith-era players to come back.

Already securing Brandon Peters, along with almost the entire offensive and defensive lines, Bielema is essentially running back 2020 next fall with the hopes of trying to create something Smith couldn’t.

Hansen, the veteran leader in a depleted linebacker corps, may have been the missing link if Bielema wants to seriously contend for a bowl game in his inaugural season.

Hansen’s impact on any of Smith’s success couldn’t be overstated. With a defense heavily reliant on causing turnovers, Hansen was the poster child of forced fumbles, which helped Smith secure a signature win over No. 4 Wisconsin in 2019.

While knocking out the football was the Florida native’s calling card, Hansen truly became a well-rounded player, who appeared ready — and set — to start playing football on Sundays.

The second team All-Big Ten selection finished No. 3 in the nation in tackling and increased his interception and sack totals in the past two seasons, despite only playing nine and eight games the last two seasons, respectively.

What more did he have to prove? Well, with his NFL chances probably not being as great as he would like combined with the NCAA giving him the option to return to school with Bielema, Hansen could use his sixth year as a chance to learn under a coach with valuable NFL experience.

But it wasn’t so easy for Hansen to just turn back on the NFL and return to Illinois. Because he signed an agent, the NCAA had to grant him a waiver to come back to school, which put Hansen in a bind.

“It was quite extensive, (but) Illinois helped out a ton,” Hansen said of the waiver process. “I had to continue going through the entire draft process as if I were going to be in the 2021 draft.”

Hansen’s decision to pull his name out of the draft was incredibly difficult for him, as he wanted to play in the next level for so long. But things changed, and Hansen realized that being hasty and sticking to the draft despite being able to play in a new system with an established Big Ten coach could be costly.

Next year’s defense won’t have the Smith input that developed Hansen into one of the top linebackers in the conference. The Illini will no longer run a 4-3 or be dependent on turnovers. Defensive coordinator Ryan Walters and Bielema will install a 3-4 defense while trying to find the strengths of each player on the field.

Hansen’s return doesn’t allow him to fly over to Dublin, Ireland, to take on the Cornhuskers. His return won’t guarantee a spot in the Rose Bowl. But his return gives the Illini stability at the linebacker spot and a chance to kick off the Bielema era the right way with a bowl appearance.

Hansen has already played in a bowl, and he’s put in his time. He helped the Illini compete in Big Ten play by forcing turnovers and flying to the football. Bielema can prepare the Smith recruit for the NFL, and this offseason can be a learning experience for the sixth-year senior, even if staying in Illinois for another season was a tough decision.

“Understanding the ins and outs of the (NFL process) is going to help me out a lot going forward when I come out for the 2022 draft, hopefully,” Hansen said. “It’s something I will share with my teammates as well and keep that information real close.”

But Hansen’s decision to return would take more than a defensive system changing. It was about the substance of Bielema’s vision for the program.

“A lot of what he said, it sounds great up front,” Hansen said. “It was like, maybe that’s a little hard to believe. But a lot of the players backed up everything that he had to say, and that really did it for me.”