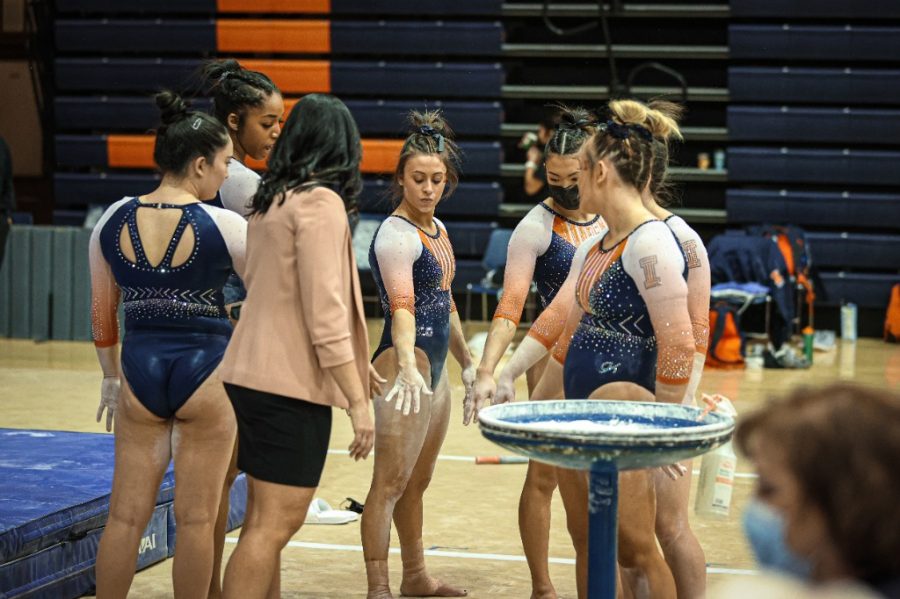 The Illinois women’s gymnastics team huddles up before the meet against Michigan on Feb. 21. The team lost to Iowa on Sunday.

In the grand scheme of things, however, this loss doesn’t mean much. They got their fourth-highest score of the season, so their national qualifying score won’t take a hit. The NQS is formulated by disregarding the top score for a team and then averaging the remaining five highest scores of the season.

The Illini won two out of four events as a team: bars and beam. But, they only won one of the events individually: bars.

On vault, Illinois lost 49.050-48.850. Sophomore Mia Townes led the way with a 9.825, but she ultimately finished behind Iowa sophomore JerQuavia Henderson, who won the event title with a 9.875. Freshman Abby Mueller also tied her career high with a 9.775.

For the fourth time this season, senior Nicole Biondi competed in the all-around competition. This week she beat Henderson 39.325-38.600. On beam, she tied her career high of 9.875.

Next, the Illini come back home for their last meet of the season at Huff against No. 5 Minnesota. This will be their last test before the Big Ten Championships. Seniors Biondi, Rachel Borden, Kasey Meeks, Kylie Noonan, Tessa Philips and Jaylen Spence will be honored for Senior Night at the meet.