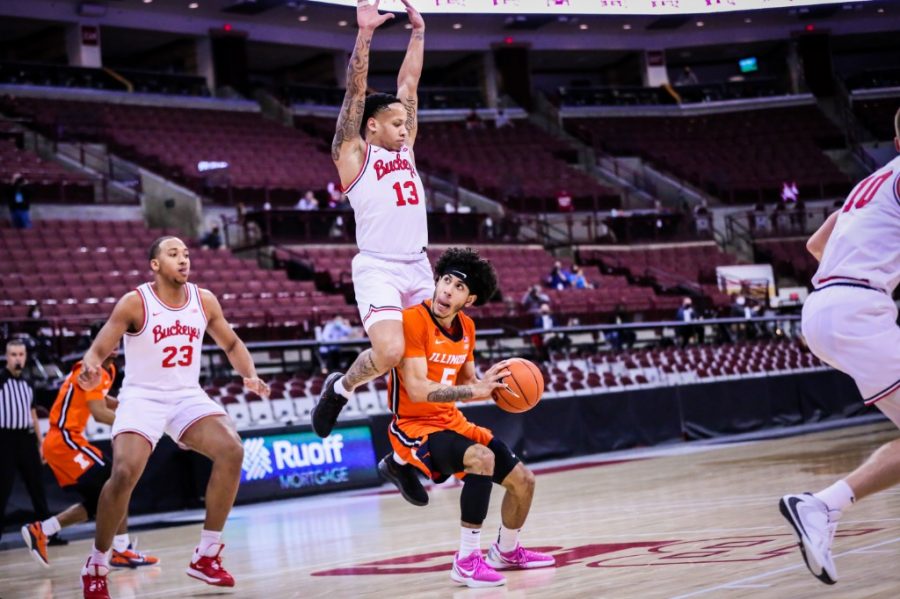 Freshman Andre Curbelo prepares to shoot during the game against Ohio State on Saturday. Illinois won 73-68.

Illini star Ayo Dosunmu returned to the starting lineup on Saturday after missing three straight games with a facial injury. After settling in, masked-up Dosunmu was back to his normal self, creating space in the lane, flowing in transition and dishing out passes to his teammates. Dosunmu’s production, combined with another stellar outing for freshman Andre Curbelo and a clutch 3-pointer from Da’Monte Williams, led Illinois to yet another ranked road victory over No. 7 Ohio State.

While the Buckeyes challenged the Illini in the paint and forced multiple players into foul trouble, the Illini remained composed throughout 40 minutes and won the game in the final minutes. The Illini will now head into postseason play on a four-game winning streak and will get a double-bye for the Big Ten tournament, which starts Thursday.

Let’s take a look at the performances of Illinois’ top seven players.

Masked up and back on the court for the first time since Michigan State, Dosunmu did what he always does for the Illini: close.

Down by four with less than three minutes left, Dosunmu split a pair of free throws to bring the game within one possession. Then, after a Williams three to tie it up, Dosunmu scored the final five points of the game, including an and-1 layup for the go-ahead score.

Coming off a three-game absence, Dosunmu never missed a beat, tying a team-high 19 points on 70% shooting. Dosunmu also hit five of his six free-throw attempts. He was also a solid facilitator on Saturday, dishing out three assists.

While the Illini still succeeded with Dosunmu out, having its star player back on the court heading into the Big Ten tournament will be crucial. Dosunmu also stated in the postgame press conference that he will wear the mask the rest of the season.

After a big 18-point outing against Nebraska – Illinois’ first game without Dosunmu — Miller has been pretty quiet. That was no different on Saturday, as the freshman scored just two points on 1-6 shooting.

It seems like Miller has just failed to find consistency in his game and find ways to get to the basket, something he does almost as well as anyone on the team. If Miller can get that confidence back up throughout the Big Ten tournament, the Illini will be dangerous in the NCAA tournament.

Frazier spent most of the first half on the bench for Illinois after picking up two fouls within six minutes, leading to zero points through 20 minutes. In the second half, Frazier wasn’t much more efficient on offense, going 1-4 from the field. His one 3-pointer came at a crucial time, though, as he brought the Illini’s deficit from four to one with less than five minutes to play.

The senior’s second-half defense is what really matters, as he held Duane Washington Jr. to four points on 2-10 shooting after he scored 11 points in the first half. Washington’s lack of late-game production helped the Illini stay within striking distance of the Buckeyes.

Grandison has continued to prove he’s a special piece for the Illini this season. The junior was a big part of Illinois’ first-half success, as on two separate occasions he scored back-to-back buckets to give or extend his team’s lead.

Grandison finished with nine points on 4-7 shooting and also grabbed four total rebounds, including one offensive. His defensive energy and hustle to the boards is Grandion’s most important attribute, and he has rarely disappointed so far this season.

After a solid first half — scoring 10 points on 5-7 shooting, Ohio State’s triple-team defense in the second half frustrated the Illini big, scoring just two second-half points. Part of that struggle can be attributed to Cockburn’s teammates failing to get him the ball, but the sophomore also missed three baskets.

Cockburn did help hold the Buckeyes to 32 points in the pain, while the Illini scored 42. E.J. Liddell did have the edge on Cockburn again, as he scored 19 points and helped put Cockburn in foul trouble.

Meeting Ohio State at any point in the postseason will be a challenge for Cockburn, as the Buckeyes and Liddell have found ways to minimize his touches and scoring.

Curbelo is getting hot at the right time for the Illini. After struggling to be consistent most of the season, the freshman has found his groove in the last several games, going for a season-high 19 points at Ohio State. Curbelo has scored in the double digits his last five games and is averaging 17.6 points in the last three, which were Wisconsin, Michigan and now, Ohio State — all ranked opponents.

The freshman was productive off the ball as well, grabbing five defensive rebounds and dishing out a team-high six assists. While Dosunmu was gone, it looked like Curbelo was filling that all-around role and that has clearly continued with the junior guard back, only making the Illini stronger.

While Dosunmu hit the final shots for Illinois, it was a 3-pointer from Williams with 1:31 left to play that tied the game for Illinois, robbing Ohio State of any momentum. While Williams isn’t the most threatening or consistent scorer, he certainly knows how to show up in big moments.

The senior came to play against Ohio State, as he finished with seven points, six rebounds and a steal. Williams also did a nice job helping against Liddell and guarded him well down the stretch.