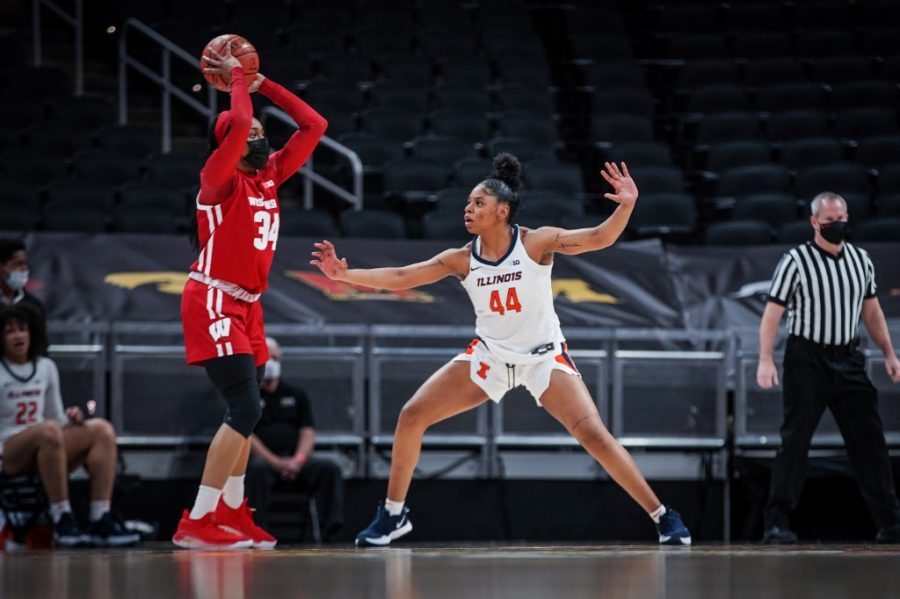 Sophomore Kennedi Myles guards an opponent during the game against Wisconsin on Tuesday. Illinois won the game 67-42.

The Illinois women’s basketball team blew out Wisconsin, 67-42, Tuesday in the Big Ten Tournament in Indianapolis. Freshman guard Aaliyah Nye scored a career-high 17 points, and sophomore forward Kennedi Myles had a double-double with 12 points and 11 rebounds.

“Last time we played (Wisconsin), you know, we were kind of beat up in the middle of the year,” said head coach Nancy Fahey.  “We didn’t have two or three players, and now we’ve got our full complement at this. (They’re) kind of getting in the groove playing with each other.”

Tuesday’s win was the first Big Ten Tournament win of the Fahey era, and the Illini’s first victory against the Badgers in over two years. Fahey got rewarded with a water shower after the game.

Heading into the game, Fahey noted that the team needed to increase their point production — the team scored 72 points in the win against Minnesota Friday, which is among the higher point totals for the season. They didn’t get to 70, but they got the win nonetheless.

“It was great because we got Coach Fahey her first Big Ten tournament win,” Nye said.  “And it feels great just as a team because we know how hard we work, and this is just the culture that we’re building here at Illinois.”

Illinois’ first possession was rocky, ending in a turnover about 20 seconds into the game. The rest of the first quarter went extraordinarily well for Illinois. The Illini went on a 9-0 run, forcing a Badger timeout just under three minutes in the game.

Wisconsin’s attempt to ice the Illini was futile, and Illinois climbed to a 15-0 lead in the opening five minutes. The lead would grow to 17-0 before a pair of Imani Lewis free throws put the Badgers on the board with 2:53 left in the first quarter.

The Illini continued to dominate after the free throws, going on a 7-0 run after the Lewis free throws and closed out the first quarter with a 24-2 lead.

The second quarter has historically been the Achilles heel of Illinois, including in the last Wisconsin game when the Badgers outscored the Illini 20-5 in the second ten minutes. That trend held somewhat steady, as Wisconsin’s Sydney Hilliard made a layup with 8:53 left in the second quarter. Wisconsin would go on a 9-0 run in the first five minutes of the quarter, capitalizing on an Illinois scoring drought to narrow Illinois’ lead to 24-11.

Illinois’ scoring drought persisted until 3:34 left in the quarter, when a jumper by Myles expanded Illinois’ lead to 15, 26-11. Illinois would score a few more baskets and entered halftime with a 32-12 lead. By halftime, Nye had nine points to lead all scorers.

Fahey has stressed throughout the season the importance of curbing turnovers. Her team almost doubled their turnovers in the second 10 minutes, with five in the second quarter and three in the first quarter.

At halftime, Fahey adjusted the team’s strategy to facilitate more ball movement, and the team would go on to score 35 points in the second half.

Illinois opened up the second half with a Nye fastbreak score. The third quarter went more like the first quarter; Illinois had a 26-point lead with 4:03 left in the third, 47-21. Then, the Illini went on an over three-minute scoring drought before a Myles jumper snapped the spell. Illinois entered the final period with a 24-point lead, 49-25 (the Illini, for reference, scored 24 points in the first quarter).

A  fastbreak layup by sophomore guard Jeanae Terry to open the final period pushed the lead to 51-25, and the subsequent free throw made it a 52-25 game. But the scoring inconsistencies that have plagued the Illini all season made an appearance, as Wisconsin went on an 8-0 run while Illinois went an over 4.5 minute scoring drought, forcing Fahey to call a timeout with 5:22 left in the game.

The move paid immediate dividends, as junior guard J-Naya Ephraim made a 3-pointer to give Illinois a 55-33 lead. Wisconsin then called its third timeout of the afternoon, but Illinois was able to expand the lead to 60-35 with 3:48 left.

Illinois emptied the bench out after that, and sophomore forward Solape Amusan scored the last basket of the game to make it 67-42.

Illinois next takes on Northwestern Wednesday in Indianapolis, and the team is eager to keep its momentum going.