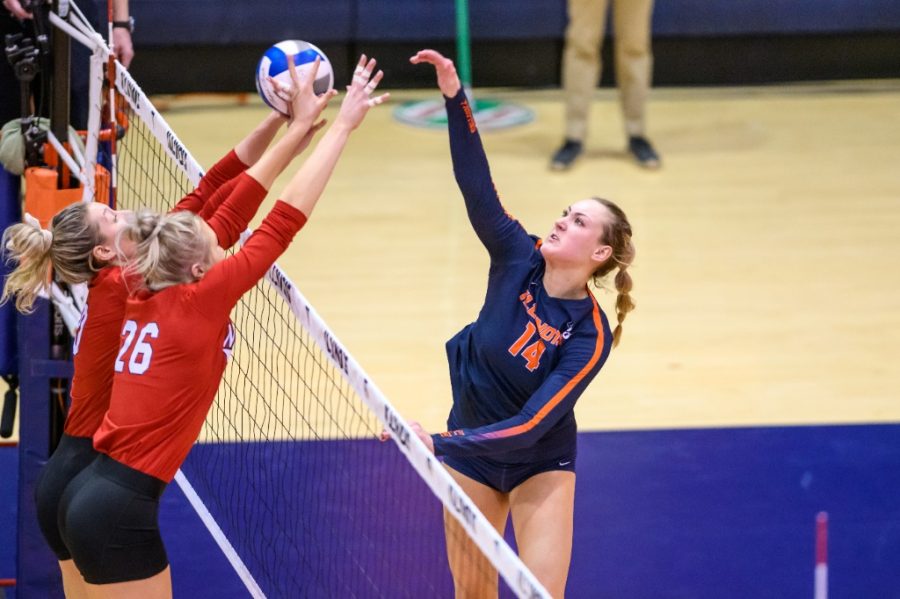 On an all-time cold streak, Illinois will continue to search for answers at No. 4 Minnesota this Friday and Saturday at 6 p.m. and 5 p.m., respectively. Minnesota will be Illinois’ fifth ranked opponent this season, headlining what has been an incredibly difficult schedule.

“Normally at this phase in our schedule we’ve just completed the preseason after 10 games, so we’d at least had some run-up to the Big Ten (schedule),” said head coach Chris Tamas. “Now, we’ve been thrown into the mix where we’ve played four of the top 12 teams in the country these past four (matchups). It’s a little bit like we’ve been thrown into the fire, but again it’s something that we’ve all signed up to do, and it’s just our lot this year with our schedule.”

Illinois will have its hands full again this weekend, with Minnesota boasting two multi-time All-Americans in Regan Pittman at middle blocker and Stephanie Samedy at opposite hitter. So far this season, Illinois has faced three All-American middle blockers and struggled mightily to contain them. Pittman may pose a bit of a challenge in that respect, though statistically it seems her game is more defense-focused with 1.21 blocks per set. Samedy has been the bigger offensive threat this year, however, and is averaging an eye-popping 4.53 kills per set this season.

There will be a few things to look out for with the Illini this weekend, namely what they do with their rotation. This past weekend against Nebraska, they utilized a 5-1 rotation despite using a 6-2 rotation throughout the rest of the season.

While there was no confirmation, Tamas suggested the 5-1 was something they’d been working on in practice and will likely continue to utilize. There were a variety of reasons for the change, but it primarily boiled down to the whole roster developing and becoming more comfortable with the system.

The rotation change has meant a few of players have seen their playing time change, with Alyssa Eske and Hollowell seeming to be major recipients of additional action this past weekend. Hollowell, now in her final year at Illinois, had only played in two matches her entire collegiate career until this season.

“It’s really exciting,” Hollowell said. “It’s definitely a new side of leadership that I haven’t seen before. I have (experience) in practice, but not so much in game. I really enjoy it a lot. Just being with the girls on the court — it’s great.”

Though the rotation change is likely the most tangible evidence of Illinois’ work to turn its season around, Tamas seems to have pulled on just about every string to try to revitalize the team during its slump.

“We’re literally two points away in a lot of these sets, and we just have to learn how to score those couple more points,” Tamas said. “Whether it’s a tactical thing, a technical thing or just the mentality of it all. Just playing freely, playing relaxed, not feeling pressure to score a point to close out a match or something like that. I think there’s a few different facets of it, but we’re getting there. We’re getting closer.”

Though the schedule has been very unforgiving for the Illini, facing another ranked opponent gives them the opportunity for an upset victory if they are able to break through. As the now eight-match losing streak has continued to build, the team has played hard every match in spite of it all.

“I think there can be lots of different reasons for giving up on this year, but we’ve had no COVID instances,” Tamas said. “We’ve had nothing of the sort. We haven’t been shut down once, so I’m really proud of them for just sticking it out and trying to do their best in the moment. Just really proud of them for coming in and coming to work every day. It hasn’t been easy, but they’ve been doing a really great job.”

Head coach Chris Tamas and volunteer assistant coach Jen Tamas will not be attending this weekend’s matches due to COVID-19 contact tracing. Rashida Reed will step in as acting head coach for both matches against Minnesota this weekend. Reed has been an assistant coach at Illinois since 2017 and was previously the head coach at Northern Michigan from 2016-2017.