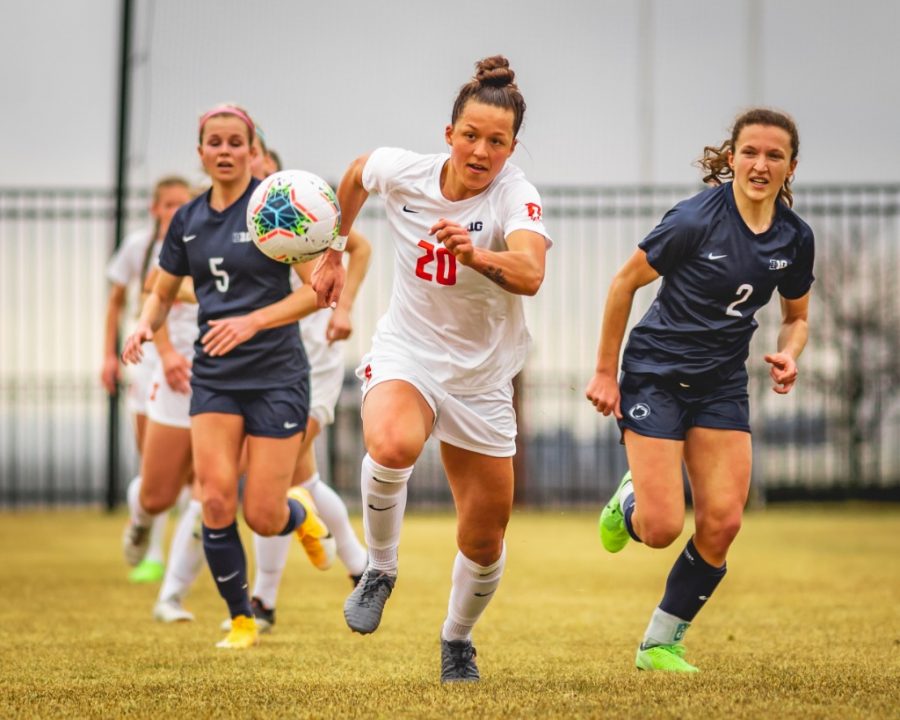 Junior Makena Silber chases after the ball during the game against Penn State on Feb. 28. Illinois will face Indiana today in Bloomington.

On Saturday, the Illinois soccer team will travel to Bloomington, Indiana to go head-to-head against the Indiana Hoosiers.

Illinois’ (2-2-1) last game ended with a 0-0 draw against Minnesota. Senior goalkeeper Sami Sample recorded a season-high of nine saves during the 110 minutes of match play.

Indiana (3-2) currently sit third in the Big Ten conference and are coming off a 3-2 win against Maryland after a game winning goal in the 82nd minute from a corner.

The Illini have hit a cold spot in the season after starting off strong in their first two games, recording two shutouts and four goals in total. Though they lost against Penn State and Wisconsin, the defense has gotten stronger, but the offense has yet to catch up.

“We did some really good things offensively, but we just didn’t create enough chances (against Minnesota),” said head coach Janet Rayfield. “As we transitioned into the attacking half, we got to be a little bit better with the ball and created more chances.”

Currently, Illinois is sitting second from bottom in shots in the Big Ten at 28, while Minnesota are atop the rankings with 81 shots.

What has changed the most is that there is now one more defender in the backline to have more coverage. There is also a forward who has moved back into midfield, leaving one forward up top alone.

In the past seasons, there was a forward pair that complemented each other well. Ever since junior forward Makena Silber was a freshman, she has started for her team, though her forward partner was almost always Kelly Maday, who graduated last year.

Silber is a tall and strong forward, while Maday was short and speedy, and it worked for the team, as they were able to have their own strengths and combine them on the field.

With the graduation of Maday, the team is missing the forward combination up top to help get the ball in the back of the net.

Illinois has struggled to build up a connection in the midfield to get players up and open for passes, crosses or shots. With senior midfielder Hope Breslin in the central-attacking midfielder role and arguably one of the best players on the team, it can’t be a one woman show all the time.

Reading each other in the final third, getting a better final pass, winning second balls and getting possession are some of the things that Rayfield said the team can improve on. With a little less than a month until the end of their regular season, the Illini hope to turn their game around starting against the Hoosiers.

“If we can possess the ball in the attacking half the way we are in the defensive half, I think we’ll create a lot more chances,” Rayfield said. “We’ve got to get numbers forward, and we’ve got to take a little more risk on getting those numbers forward.”

The game is at noon central time at Bill Armstrong Stadium in Bloomington and can be streamed live on Big Ten Network +.